3 In the Key – Raptors Game-Day Preview vs. Cavs

Share All sharing options for: 3 In the Key – Raptors Game-Day Preview vs. Cavs 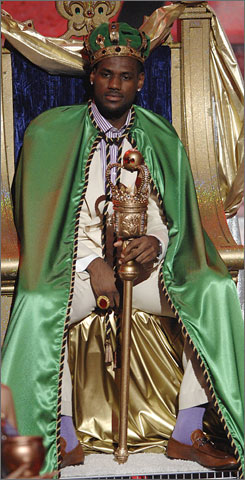 It’s hard to know just who’s going to be playing in this one.

Chris Bosh practiced yesterday but without contact and looks to be sitting tonight’s match out.

Andrea Bargnani is feeling better and may play but is still not 100 per cent.

And TJ Ford had his most intense practice in over a week, but is still not back in total game shape. It sounds like he’ll play, but if that’s the case he’ll likely come off the bench behind Jose Calderon.

Finally, the Cavs are dealing with injuries to key players as well and no one for either team is more "key" than Lebron James. James is day-to-day after spraining his finger against the Detroit Pistons Wednesday night. X-Rays came back negative but we may see Cleveland minus King James this evening as a precautionary measure by the Cavaliers.

So am I hoping Lebron plays?

To me it makes no difference.

Toronto is going to face Cleveland a few more times this season anyways and needs to learn how to beat this team. Head coach Sam Mitchell talked after practice yesterday about working on getting to Cleveland’s shooters and chasing them away from the three-point line. And it looks like the Raps will try and play Lebron one-on-one, provided he plays, in effort to stay at home against the likes of Daniel Gibson and Damon Jones.

Hence the first of our three keys to a Raptors’ win:

1) Guard on the perimeter. Of course keeping Lebron under control always seems like a "game key" but seeing as that’s becoming next to impossible for the entire league as of late, let’s look at how he makes the game easier for his team-mates, especially those parked on the perimeter waiting for open looks. This is especially true if Lebron isn’t playing tonight as without LBJ, the Cavs become a much-more perimeter oriented club. As was the case against Detroit on Wednesday, the team struggled to score and the Raptors need to lock-in defensively and prevent easy looks.

3) Ball movement. Whether it’s TJ or Jose that’s running the show, Toronto needs to continue to play the style of game that’s made them so effective of late. Inside and out, swinging from side to side, things just have to move so the Raptors can get open looks. Without Chris Bosh, this will be even more crucial as I hardly expect much of the Raptors’ scoring from the free-throw line or in the paint. This is a great jump-shooting club but a jump-shooting one none-the-less without CB4 and perhaps this might be a good opportunity for Andrea Bargnani to provide some much needed interior play.

I think getting TJ back should actually help with Toronto’s free-throw woes but it will be interesting to see how the team plays as TJ reclaims the starting point-guard role. It may take him a few days to get back up to speed but you’ve gotta wonder if he struggles, whether or not the "who should start for Toronto" debate breaks wide open again.

And perhaps it’s already broken open based on Jose’s recent play. Now that the Garbo situation has resolved itself, this debate seems once again to be the proverbial pink elephant in the room.

That seemed to be the case prior to the Memphis game. RaptorsTV had an interesting panel alongside the usual lugs Paul Johnson and Sherman Hamilton as added to the fray were The Score’s Adnan Virk and CBC’s George Stroumboulopoulos. George got right to the point (rocking a Metalica t-shirt no less) asking Sherman Hamilton point-blank if Jose shouldn’t be the starting point guard for Toronto. Hamilton and Paul Johnson exchanged nervous glances as if to say "um...who brought the new guy? Didn’t he get the memo that we avoid that topic at all costs?"

Eventually Sherman avoided answering the direct question by discussing the value of two top-flight point guards but it was a breath of fresh air and made for some entertaining TV. I'm hoping for round two tonight...