3 In the Key – Raptors Game-Day Preview vs. Grizzlies

Share All sharing options for: 3 In the Key – Raptors Game-Day Preview vs. Grizzlies 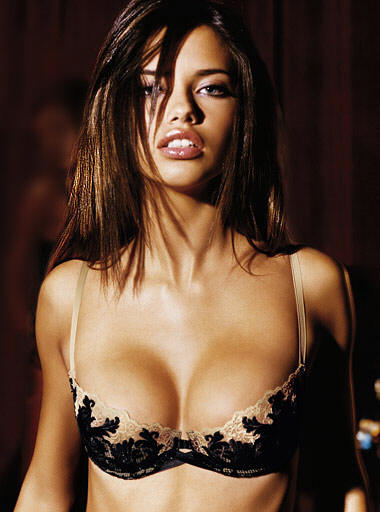 Yesterday at the HQ, two issues from the NBA world were swirling about my brain.

1) That after all the speculation and back and forth, Jorge Garbajosa now looks to be done for the season.

I’ve gotta say, I’m not sure which one has me more concerned.

Long-time readers will know of my affinity for a certain trifecta of Brazilian beauties and while rumours that Tom Brady was dating Giselle made me swallow hard, I could sort of understand it. But Marko Jaric and Adriana?

It’s like what Chris Rock said when he found out that Jermaine Dupri was dating Janet Jackson.

Next thing you know I’ll hear that Anna Beatriz Barros, the last of the three, is engaged to Rick Brunson! Is it possible that Danny Ainge in order to get KG out of Minny finagled some deal in which various supermodels were sent to Minnesota for PR purposes? That’s gotta explain the trade and frankly I’m sold if I’m a T-Wolves fan. That would get me to buy season tickets more than any Al Jefferson acquisition would!

Jokes aside, how about this whole Garbo situation? He’s ok to play…he’s not ok…he’s just not back in shape, he’s being outplayed in practice…yes, this just goes to show that no one really knew what was going on.

And as much as I like to put the local media on blast, the advantage of living in a large Metropolitan area is that at times you can get completely different takes on a situation.

Exhibit A: Doug Smith from the Toronto Star. (See the Just chill a wee bit section.)

Exhibit B: Dave Feschuk from the same Star and
Michael Grange from the Globe and Mail.

Two different sides taken and not sure one is more right or wrong than the other. The fact of the matter is that everyone is going to be weighing in on the topic and yet I’m not sure there’s an exact right answer.

Only Jorge Garbajosa himself knows how he felt and as mentioned, it’s tough to fault someone for playing when they’re not experiencing any pain. If I were in Jorge’s shoes would I have wanted to play for my country? Of course! However had I just experienced such a horrific and potentially career-threatening injury, I also would have probably erred on the side of caution and foregone the Euro tourney in favour of my career’s longevity. Yes, maybe I wouldn’t have done any more damage to leg than I already had...but for the sake of playing in Beijing, and, right, for the Raptors, I probably would have done my best cheerleader impression from the sidelines until everyone was on the same page with my prognosis.

I expect a lot of "woulda, shoulda, coulda" type articles over the next while but unless someone’s going to be able to dig up the real story of the injury, the details of the rationale behind the insurance policy, how Garbo was really feeling, etc, than let’s move on shall we? The Raptors could use less off-court distractions and more focus on their .500 record heading into tonight’s game against the Grizzlies.

And I think that’s perhaps the silver lining in all of this.

Garbo wasn’t really playing for this team this season!

Yet with all the talk surrounding his status so far, he was hot button topic number three slightly behind the "what’s wrong with Bosh and Andrea" and "should Jose be starting/TJ makes too many bad decisions with the ball" solicitations.

Now, case closed. Jorge needs surgery and may be out the entire year. Next!

Jamario Moon was filling in quite nicely as the starting 3 in any event and now this perhaps allows Joey Graham to see the light of day one last time. Garbo’s absence no doubt makes Sam Mitchell’s job easier and while he’ll never admit this, he should now be able to finally set a consistent rotation:

Bosh, Ford, Moon, Rasho and A.P. start, Bargnani, Delfino, Jose and Kapono back them up with dashes of Hump, Dixon and Graham thrown in.

This team needs to get consistent because after this home stretch, things get a lot trickier schedule-wise.

But before we jump too far ahead, the Raptors take on the Grizzlies tonight at the ACC. I asked Chip, from 3 Shades of Blue, about the team’s youth, the Mighty Mouse situation and what his thoughts on this evening’s match were. Here’s what he said:

Memphis right now is in a difficult period in their development. Sort of like a child's teenage years. The players are still learning Iavaroni's system and at times still appear to be thinking rather than reacting to plays being called. However the learning is obviously going on and the team is getting better.

The hardest thing to do with a team like the Grizzlies is to remain patient while they go through this learning curve. Luckily Memphis has a brand new GM and a brand new coach so patience should be exhibited for at least the first 50 games before the trade rumors are taken seriously. Iavaroni and Wallace aren't going to change the core of the team until they have given the players at least that long to show what they are capable of.

That isn't to say a deal couldn't occur earlier for Damon Stoudamire and maybe another secondary player but the core should remain in tact this season. Damon however represents a totally different situation. He isn't part of the future for this team with recent draft picks Kyle Lowry and Michael Conley on board already. Throw in Juan Carlos Navarro who could play point guard in a pinch and Damon's real value appears to be in what can be acquired for him more than what he brings to the court. His experience is valuable for developing young PG's but after a while that just gets in the way of the young players getting PT. Once Conley returns from his shoulder injury and gets some minutes then Damon will be on the blocks.

This game should be even more exciting than the last time these two teams met all the way back on November 21st. That game was poorly played by both teams for most of the night until Toronto made a late charge to pull away. It was by far the worst game of the season for Memphis. Revenge should be on their minds. The funny thing is that this game is in some ways a mirror image of that last game. Memphis comes to town on the 2nd night of a back to back road trip while Toronto is sitting at home relaxing on their couches. Whether or not they start as flat as Memphis did (0-11 from 3 pt land to start
the game.)

If Memphis hits their long balls while continuing to take advantage of their inside strength the outcome could be very different this time.

They also can’t stand around shooting jumpers all night – the first of our three keys:

1) Get to the rim. The Raptors have been doing a terrible job of getting to the free throw line lately and without Chris Bosh, I’m not sure the team would know where to stand to shoot foul shots. This is a young team that while quite athletic, is no defensive juggernaut yet and the Raptors need to take advantage and get into the paint, especially early on to set the tone.

With Garbo out, will Joey be able to help get some minutes and help Toronto get to the rim?

2) Transition Defence. Memphis likes to get out and run and Toronto needs to keep this in check. The Raptors did a good job last time these clubs met of clogging things up and generally this season the team looks improved in this capacity. However with the Grizzlies 3 point gunners, who were uncharacteristically bad in the last meeting, a few fast break baskets could open things up and Toronto could find itself down in a hurry. The Raptors need to prevent run-outs and therefore control the glass to prevent the Rudy Gays and Hakim Warricks from making like it’s the Big East.

3) Perimeter Defence. This is an area that Toronto has struggled with off and on all season. Even the Bulls were able to get easy open looks at times in Toronto’s last match, the Raptors were just lucky that Chicago couldn’t knock anything down after the second quarter. The Grizzlies have much more of an inside outside game (led by Pau Gasol, that man who has been the favourite trade piece for Chicago Sun-Times columnist Sam Smith) than Chicago and Toronto can’t let Memphis get the same looks it gave the Bulls.

If Toronto nails these keys, they should be able to add another W to their home-court record. And while it looks like TJ won’t be available until this weekend’s games, Jose has done a commendable job in his place and we’ll see if Juan Dixon or Darrick Martin gets the call to back him up. I’m hoping it’s Dixon, whose scoring ability might be a nice change of pace to Jose’s pass-first style and one that keeps the Grizz on their toes. Asked about using one or the other, Mitchell stated that it depends on match-ups and what the Raptors need.

"Juan scores the ball better but Darrick runs the team a bit better."

I’d say that’s a pretty fair statement but what someone really should have asked Mitchell is if acquiring Marko Jaric as a third-stringer was an option.

Think about the marketing possibilities!

Tonight at the ACC is Spanish night with Jorge Garbajosa and Jose Calderon bobble-heads being given out. If Jaric was here would that mean a whole Brazil/Spain themed night with Adriana Lima bobble-heads as well? Would she be a regular at games? Would that have Jack breaking the record for "hellos" in a telecast?

Ok, I better calm down before I start taking this Brazil thing to another level and consider options for Toronto in which they reacquire Hoffa...