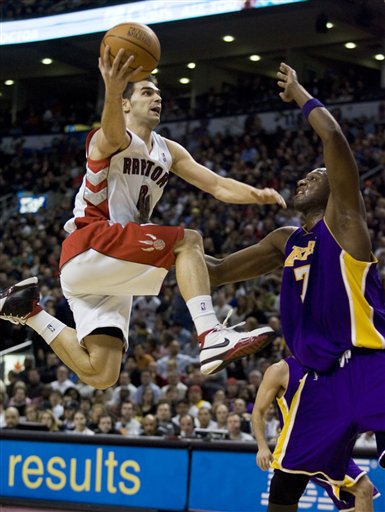 It’s going to be interesting when TJ Ford comes back.

The Toronto media post-game (ok the Sun) was already asking Jose if after games like today’s, he thinks about what it would be like to be a constant starter on a club.

Mitchell put a quick stop to it.

"That’s why we need both of these guys," Mitchell started before adding on that it’s also the reason they refuse to listen to what many of the gathered media was consistently discussing concerning trading one of the two.

The fact of the matter though is that Jose was incredible today with a team-high 19 points and 14 assists with only one turnover. He controlled the pace of the game and hit big shots at key moments as well, all qualities you need from your starting point guard. In my books what’s been most impressive from both TJ and Jose is their shooting. Here are two guards who entered the league as brick-chuckers. Now, teams can’t go under screen and rolls when defending Ford and Calderon because both can bury that mid-range jumper.

Jose made the Bulls pay all afternoon long and when he wasn’t hitting shots, Chris Bosh and Jamario Moon were. Between this and Toronto’s effort on the glass Toronto took control of the game in the final quarter and started Grey Cup Sunday with a very important win.

Those would be the numbers from Jamario Moon, the Toronto Raptors starting small forward.

Anyone think the Raptors would have a starting small forward with the ability to put up these numbers on a consistent basis? Moon was a game-changer today and his six blocks and Dr. J-esque scoop shot in the fourth quarter seemed give Toronto the momentum boost it needed to close this one out. If Moon can give this sort of presence for the rest of the season, it completely changes the way teams are going to defend the Raptors.

The win was great, and Toronto did some nice things rebounding wise (they out-rebounded one of the league’s better rebounding clubs 45 to 44) and on defence, but this number really made me queasy. If Toronto wants to compete with the better clubs in this league, they need to start getting the ball inside and to the rim. The Bulls are strictly a jump-shooting club and for them to get to the charity strip seven more times is slightly concerning.

Caliente – Jose Calderon. Muy excellente, as previously discussed. It was interesting to see Juan Dixon getting the back-up minutes today as opposed to Darrick Martin. Dixon looked solid in the first half but in the second, the offense ground to a halt with him running the show. If TJ can’t go against Memphis, we’ll see who gets the nod.

Hot - Jamario Moon. Blocked shots, steals, inside and outside scores, Moon did his best Scottie Pippen impersonation this afternoon and I’m looking to see more numbers like this as he gets more comfortable in the Raptors’ offence.
Hot – Chris Bosh. You have to tip your hat to CB4 once more. Bosh didn’t have the scoring day he did yesterday, but turned in a complete performance in 43 minutes with 16 points, 13 rebounds and four assists. The Bulls are paying big bucks for Ben Wallace to grab rebounds and CB4 dominated him today. Against the Cavs Chris didn’t always get position but today he had the glass on lock-down.

Cold – Ben Wallace. Which brings me to Big Ben…oh…who is currently killing my fantasy team. Five rebounds, two points and only one block on one for six shooting including free throws?

Cold – The Chicago Bulls. What in the world is going on with this team? I felt last year that they were over-rated but I never expected them to struggle this much this year. Is a trade coming? I’m not sure. But something’s gotta be done soon or this team is going to find itself back in the lottery again.

This was a very important game for Toronto today.

Toronto needed to get back to .500 and atone for their home losses of late.

Especially against a Chicago team that lost to the only team in as much disarray as themselves, the New York Knicks.

The Bulls came out shooting successfully early on but reverted to their 38 per cent ways as the game continued. When their shots started to drop though I was proud of the way Toronto responded and kept plugging away. This was one of those games like Memphis that needed to be ground-out in order to get the W but they found a way.

The win was also important because the Raptors now embark on a stretch of winnable games, particularly at home and this was the way to get things off on the right foot. With Memphis, Cleveland, Washington and Charlotte coming up, the Raptors need to take advantage. The rest of December ain’t so friendly so it’s vital that they get as many of these as they can.