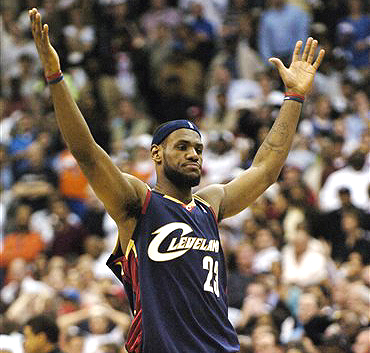 Lacing Them Up: I remember Michael Jordan’s playoff antics quite well.

In University, one of my best friends was a huge New York Knicks fan and every year the boys from Gotham would show promise only to be thwarted by MJ and the Bulls time and time again.

Jordan could kill you in so many ways too. He could demoralize you with this clutch shooting, turn the tide with his defence, and use his athletic ability to get to the rim seemingly at will.

There probably will never be another Jordan. Kobe due to his style, skill-set and competitiveness is probably the closest thing, but he’s not the leader MJ was on and off the court and MJ was simply the most dominant player I’ve ever witnessed...

I’ve seen lots of Mr. James and I always thought he was one of the top 10 players in the game. And we all know that the Lebron legend really took the next step in last year’s playoffs when James almost single-handedly beat the Pistons himself.

But today was different.

James didn’t just score, he did EVERYTHING for his team. Seeing him kill the Raptors in every which way really opened my eyes as to just how amazing this kid, and he is still a kid, is.

-Those 3 pointers from that sunk the Raptors? All made possible by Lebron’s court-vision and ability to draw in defenders.

-The key offensive and defensive rebounds every time the Raptors made a push? Yep, LBJ.

-Clutch shots by Lebron in the final period. Lebron himself delivering the knock-out blow.

I found myself getting so angry watching the game out of frustration. I mean, it’s just not fair. You’ve got a player who is so much stronger, athletic, explosive and simply more talented than anyone else and today it showed. At times my mind drifted off and I wondered if even MJ himself would have been able to deal with Lebron, he’s just that dominant.

Of course as Amar from Cavalier Attitude alluded, most of the time, Lebron doesn’t get the help he needs to get his team the win. Today he did and while Toronto played a fairly solid game overall, the end result was an L.

I asked Amar the following question post-game in relation to Cleveland’s success today:

RaptorsHQ: Today we saw Lebron at the top of his game. He scored, rebounded the ball and got his teammates involved to the tune of a triple-double. In fact it felt like the Raptors got a taste of their own medicine as Lebron drew in defenders allowing the likes of Daniel Gibson and Damon Jones to bomb away from the outside. Based on what you've seen so far this season, do you think this game will be a turning point for the Cavs this season in terms of their offensive production?

Cavalier Attitude: The Cavs offense is the definition of "schizophrenic." There will be days when they look like they did against the Raptors, and then there will be days when they will just stand around and watch LeBron go 1-on-5. Drew Gooden didn't even show up on offense, and on top of that, his defensive liabilities were displayed for all to watch as Chris Bosh took him behind the woodshed.

The supporting cast will go the way Zydrunas Ilgauskas and Daniel Gibson go, and that's not a ringing endorsement for "consistency." Gibson will get better as his career progresses, and it's looking more and more like he is going to be LeBron's wingman. You saw the good Daniel Gibson. It's usually "feast or famine" for Boobie, and when it's a famine, it can get ugly for every Cavalier involved.

You forget that prior to Toronto’s recent plan to surround Chris Bosh with a gamut of long-range shooters, the Cavs did the same thing signing Damon Jones and Donyell Marshall and drafted Daniel Gibson to place around LBJ. That plan has been suspect at best but today unfortunately the Raptors saw just how successful the plan can be when the Cavs shooters are on.

Yes, the Raptors gave up a few open looks, but it was a case of pick your poison. Double and triple Lebron and leave the shooters open, or give Lebron a chance to score at will. And the way Lebron was rumbling to the rim this afternoon, he might have just scored 50. From mid-second quarter on, it just felt like Toronto was playing catch-up to Lebron, and that he was dictating the way the game was being played. It takes a special player to do that.

Toronto had turned in a couple straight games of solid rebounding performances but this one was far from a good glass-cleaning display. Not only were the Raptors beat by almost 20 on the boards, but they also allowed the Cavs to grab 13 offensive rebounds. This accounted for some killer put-backs and 3’s which combined with the play of Lebron, did Toronto in. One of our readers noted that Toronto misses Rasho and I’d have to agree. Big Z was all over the boards with 15 rebounds and the Raptors had no answer.

The Turning Point: I felt that the turning point in this game came in the second quarter. The Raptors’ had gotten off to a nice start, were getting everyone involved offensively, and were doing a good job making Lebron take some tough shots. But on one play in particular, Toronto failed to secure the defensive rebound and Lebron

Hot – Chris Bosh. You have to give it up for CB4 in this one. He did everything in his power to keep Toronto in this one pouring in 41 points. I think as fans we can put the "is Bosh ok" talk to rest now as he looked like his dominant old self and did a great job passing the ball racking up five assists.

Grabbing more than four rebounds would have been nice but considering the effort he put forth, it’s hard to fault him too much. Even when Bosh had his man boxed out at times, the ball took some funny bounces right back into the Cavs’ hands...must have been Drew Gooden’s lucky hair-cut.

Hot – Cleveland’s 3-point shooters. Considering Damon Jones was barely playing and shooting only 32 per cent from beyond the arc before today, his five-for-nine performance from downtown hurts. Cleveland as a team in fact took 30 three-point shots hitting on 13 of them and this helped break Toronto’s back.

Cold – Toronto’s 3-point shooters. On the other side of the coin, the Raptors hit only six of their 21 attempts and without Jason Kapono it might have been really ugly.

Well there’s not much time to dwell on this loss and Lebron’s performance. Toronto has to now get back to the ACC to play the Chicago Bulls at noon tomorrow. The Bulls are in the tailspin of all tailspins losing to the Knicks earlier today in a battle of perhaps the league’s two worst clubs at present.

The scary thing is that the Bulls are essentially the same team as the one last year that put the defending champion Miami Heat out in the first round. They were without Luol Deng yesterday and no word whether he’ll be playing tomorrow but Toronto can’t afford to sleep on this club.

Here are our keys:

1) Defend the perimeter. The Bulls are currently the third worst scoring team in the league averaging only 88 points a game. They’ve got no inside scoring presence to speak of so will be letting the jump-shots fly. That’s great for Toronto but players like Andres Nocioni and Ben Gordon can fill it up if the Raptors aren’t careful. The Cavs got too many open looks from long-range today and Toronto’s got to do a better job both defending the perimeter and preventing easy forays into the paint for lay-ups.

Tyrus Thomas is apparently lazy...Raptors fans are hoping he sleeps in tomorrow...

3) Pass it to Will...I mean Jason. Jason Kapono looks great coming off the bench with the second unit but I still feel he’s being under-utilized. He’s such a deadly shooter from long-range that Toronto needs to try and get him more involved. He’s starting to look more comfortable in his role and using the threat of his shot to get to the rim. With Andrea’s inconsistencies, Toronto needs a third scoring threat, especially if TJ Ford is still out.