3 In the Key - Raptors Game-Day Preview vs. Cavs

Share All sharing options for: 3 In the Key - Raptors Game-Day Preview vs. Cavs 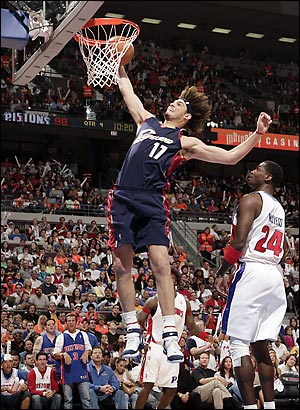 Just what the doctor ordered or worst case scenario?

We’ll find out later today as the Toronto Raptors take on the Cleveland Cavaliers for this first time this season. They follow that up with a rematch against the Chicago Bulls tomorrow.

The Cavs have started off the season with more questions than answers and last year’s NBA finalists are like the Raptors, stuck at six wins and six losses, not exactly what most expected at the start of the season.

This team relied so much on Lebron James last year that without free agents Anderson Varejao and Sasha Pavlovic, it looked like King James was going to have to do even more of the heavy lifting to get Cleveland back on top. That may explain James’ averages this season of almost 31 points, eight rebounds and eight assists in almost 41 minutes of action per game.

Yep, you could say he’s the Cavs’ go-to guy.

Cleveland now has Sasha Pavlovic back in the fold but last night ESPN.com’s Ric Bucher was reporting that the Cavs are nowhere close to re-signing Varejao and they may now be exploring sign-and-trade options.

Which takes us back to Lebron.

Larry Hughes and Donyell Marshall are out with injuries leaving James, Pavlovic, Drew Gooden, Zydrunas Ilgauskas and Daniel Gibson to hold down the fort. It’s not the New York Knicks, but is the lack of quality options around LBJ the reason for some of Cleveland’s early season struggles?

That’s one of the questions I asked Amar from Cavalier Attitude earlier this week:

1) RaptorsHQ: The Cavs have started slow out of the gate. Do you chalk this up to the early season absences of Varejao and Pavlovic and think they'll round into form? Or are there greater concerns here?

Cavalier Attitude: There have been a couple of games where the Cavs could have used Varejao to put them over the top. The loss to the Bucks on Tuesday night comes into mind immediately. Milwaukee tracked down a lot of loose balls and key rebounds, something that the Cavs usually have an advantage in because of Varejao. The two-point loss at Utah was largely due to Paul Milsap's career day, and a player like that specializes in doing the same things Varejao does. Anderson certainly would have done his part to neutralize those kinds of days by those kinds of players. Cleveland has certainly missed Anderson Varejao a lot. That being said, he's Drew Gooden's backup, and shouldn't and won't earn a penny over the three-year, $21 million deal Gooden got two summers ago.

2) RaptorsHQ: There have been whisperings in the media that Lebron is unhappy with coach Brown's system. Do you feel there is any truth to this, or that Lebron pines for a better supporting cast?

Cavalier Attitude: This has to do more with the supporting cast, although LeBron won't openly admit it. Guys like Zydrunas Ilgauskas and Daniel Gibson are putting up nice seasons, and they're key parts of the supporting cast, but Cleveland is banged up and has very little reinforcements off the bench. Another playmaker like Mike Bibby (or, dare I say, Jason Kidd?) would really put this team back to the ranks of the title contenders and make the offense look fluid despite Mike Brown's ineptitude in that department

3) RaptorsHQ: Finally, what do you see as the keys for a Cavs win against Toronto?

Cavalier Attitude: Toronto is a solid up-and-coming team as Bryan Colangelo has done a good job building up a group that can make the playoffs for years to come. This could be another one of those games where the Cavs miss Varejao's intangibles. There was a game last season at Toronto where Varejao put up 16 points and 15 rebounds while having a game-winning tip-slam over Bosh. Against a team like the Raptors, those intangibles are valuable. LeBron James may need to go for 45 once again if the Cavs want to pawn off the defending Atlantic Division champions.

I’m sure most of the readers remember that Varejao slam for the Cavs win and I for one am glad he won’t be in the Cavs’ line-up this afternoon. In fact it will be interesting to see how the Raptors do on the glass against a team they’ve traditionally had problems containing. Toronto has rebounded better this year and without Marshall and Sideshow Varejao, the Raptors should be able to win the battle of the boards.

And for the other keys?

1) Slow down Lebron James. This will be Jamario Moon’s first big test if he gets the assignment. If not, it will be Anthony Parker in all likelyhood. No one is going to contain Lebron, but hopefully Moon’s athletic ability will bother Lebron into at least some tough shots and forced passes. Lebron makes Cleveland go so if the Raptors can prevent LBJ from getting his teammates involved, Toronto should be able to take this game. Um...unless Bron Bron goes on one of those tears and ends up with 75...

Things Raptors' fans do NOT want to see tomorrow...

2) Hit shots. I have a feeling that Toronto will have lots of open looks today. The Cavs play great D, but they just don’t match up well with Toronto’s perimeter. For instance, I can’t see the Big Z guarding Andrea on the perimeter and Drew Gooden should have his hands full with CB4. The key then will be for Toronto to start knocking some of these open looks down that they've been missing of late.

3) Get to the free-throw line. You know Lebron and the Cavs will, so Bosh and the Raptors better as well. If I see another "let’s avoid getting to the line" game like Wednesday’s...

The Raptors are one of the top free-throw shooting teams in the league and need to start taking advantage of this. In a game that I expect to be a fight to the finish, the team with the most success at the charity stripe may end up being the eventual winner.