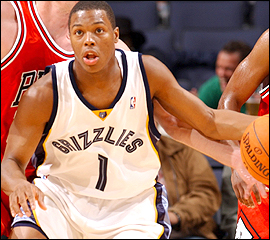 Looking to rebound after the collapse in the big D the previous night, the Raps headed to the Fed Ex Forum to meet the Memphis Grizzlies. Entering into last night's game there were lots of questions being asked about whether CB4 could keep up the solid play and whether the Raps would do what they have done so many times before in this early season...play down to their competition.

The Raps were also entering into the second half of this back-to-back without their starting PG as TJ Ford and the "stinger" suffered in the previous game was going to keep him out of the line-up. With many fans clamoring for Calderon in the starting line-up it was going to be interesting to see what the end result of this match-up would be.

This game was brought to you by the number 19 and 7, that being the total number of rebounds and offensive boards, respectively, grabbed by the Raptors franchise player CB4 one night after logging 40+ minutes despite finding himself in foul trouble early in the fourth quarter. In a game that resembled more of a match-up you could catch at the local YMCA, rebounding was essential as both teams had a tough time finding the bottom of the net.

Along with CB4, Andrea Bargnani did his best work of the season on the glass contributing eleven defensive boards. In a match-up where Il Mago had a rough time finding his stroke early, it was great to see the big man start contributing in other ways including tough D on Pau Gasol and 4 assists. It was mentioned various times in last night's broadcast and Leo Rautins was bang on when he discussed how much easier it is for Coach Mitchell to ride out cold shooting by Andrea when he is active in other areas. It’s the nights when Andrea seems lost that Mitchell is forced to sit him on the bench and it looks like Bargnani is slowly learning that it’s not always the deep three that will keep his minutes up.

Ironically the Grizz out-rebounded the Raps but without this strong effort from the Raps two big-men' the athleticism of the 4's and 5's on this Memphis squad could have had a field day. Mitchell had a tough time looking to his bench to find other bigs who could match-up against the likes of Rudy Gay and Stromile Swift. Humphries and Baston played a grand total of 9 minutes and didn’t contribute at all to the stat sheet.

Let’s be honest. The Raps did play down to their competition and this game was close for much too long. It wasn’t until Bargs nailed a 3 and then Delfino followed suit late in the fourth quarter that the Raps managed to pull away. Despite some last minute shenanigans this was the turning point. Perhaps the other interesting thing to note is that late in the game Coach Iavaroni decided to ride his young PG Kyle Lowry rather than re-insert the veteran Damon Stoudamire. At some point this Grizzlies squad is going to have to make a decision regarding full re-building or trading some of the young guys for more veteran help. If I was running the Grizz I would chose the former and call the Bulls about a Pau trade.

Hot: Yes, CB4. He was simply fantastic the past two games and looks to be rounding into shape after a rough pre-season and early season stretch. Sure it’s only two games but seeing this performance in back-to-back away games provides some comfort. He attacked the rim, hit the open shot and showed great energy and emotion. He has not been perfect (if I am a defender I am forcing him to try and go right, which he never does) but this is the level of play we as fans, and the Raps organization, are expecting.

Hot: Jamario Moon. Anyone out there think this guy is going to give up that staring SF spot anytime soon? I don’t think Joey Graham’s name has been mentioned a single time on a broadcast or in our comments since the rook entered the starting line-up. His confidence is reaching all-time highs and he is a game changer. His defense, rebounding and pure energy is something that the Raps have been looking for out of this position for quite some time. Although a little pre-mature to bring this up but its foreseeable that he is in the running for ROY if he keeps this up.

Not: Much like last night the "guys in the truck". There were not as many technical difficulties as the game against Dallas, but they are still missing live action and taking the most random shots ever. Some of the new features in high def are really great but missing game action is inexcusable. 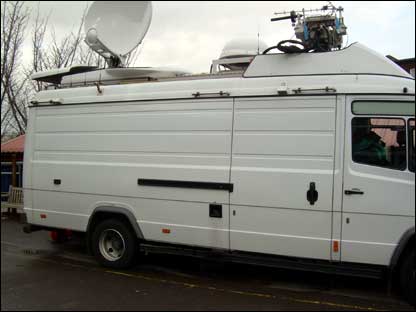 Boys? Everything ok in there?

Not: Darrick Martin. I have heard and understand all of the rationale for keeping this guy around in some capacity, but please. Let this be his last year in a uniform. Chucker much? How is his play showing Ford or Calderon how to play the point? He is not setting a good example and I for one have seen enough to know he would have more value to this team wearing a suit.

Moving On: You would have to say at this point that the Raps have done what they should have so far in this road trip. They lost to a better team and beat the weaker team. The Raps now have two days off with American Thanksgiving and then head to Cleveland to face King James. Here’s hoping the Raps don’t eat too much turkey because a fast start, much like that seen in Dallas is just what the doctor ordered.

The Raps should use these two days to rest-up and start thinking about making some space between them and the rest of the Eastern Conference teams all hovering around .500.