Share All sharing options for: Tip-In, Toronto Raptors Post-Game: Deja-Vu All Over Again 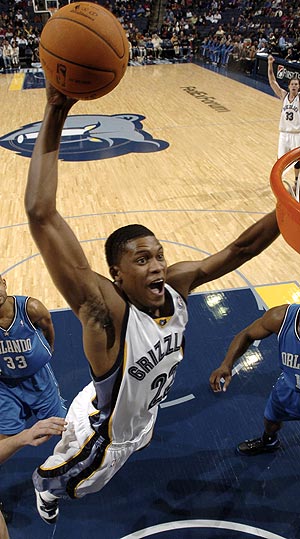 Lacing Them Up – Whew…

That was me taking a deep breath.

It’s hard not to be outraged once again at our beloved Toronto Raptors.

Up by 24 points, the Raptors couldn’t keep the backdoor closed and in the second half, the Dallas Mavericks came roaring back to get the win.

I’m sure fans this morning will be looking at this from a couple of angles:

One – that for the first quarter, we saw just how dangerous this team can be when our big three of Bosh, Ford and Bargnani are rolling. While this wasn’t consistent throughout the game, we’re still talking about three fairly young players learning how to play together who should improve as the season goes on.

Two – that for the umpteenth time this season, Toronto lost a game it had control of and allowed an opponent, regardless of their talent level, to dictate the game’s tone when it mattered most. We saw it against Utah, we saw it against Golden State, these Raptors just look inexperienced in key moments and have been virtually unable to counter opposition runs.

So which side of the fence am I on this morning? Well, honestly a little of both so let’s break it down:


A Numbers Game – The big number of course is the 24, as in the biggest comeback ever in Mavericks history in regulation. Unfortunately this makes it the second time that Dallas has reached a record comeback level against the Raps. Last year they also overcame a 24 point deficit but won that game in OT.

Really though, the number that stuck out in my head after this game was 18.

This was the number of points Nowitzki had in the third quarter as he put on an MVP type performance. He was unstoppable from long-range hitting four 3’s and creating the momentum Dallas needed to not only get back in the game, but eventually surge ahead. Some of the shots Dirk made were utterly ridiculous, but at the same time, I felt that the Raptors should have done a much better job crowding him on the perimeter preventing him from even catching the ball in the triple-threat position.

The Turning Point – It’s tough to say when the exact turning point of the game was, as Dallas started to make its run before the end of the first half. But the tone of the game changed completely from the tip-off of the second quarter and it all went downhill from there. I’m not sure what Avery Johnson said to his troops in the locker room at half, but it worked. While Toronto was the aggressor on offence in the first half, in the second it was Dallas who came out in attack mode and the Raptors who let their defence sag. Sam Mitchell talked about it after the game saying that "the third quarter did them in." He acknowledged that while Chris Bosh play a lot better, some of his team-mates missed defensive assignments along the perimeter allowing Dallas to start getting to the basket. We saw this penetration from the likes of Devin Harris and the onslaught soon followed to turn the tide for Dallas.

Hot - Dirk Nowitzki. This one’s pretty self-evident. I’ve never been a big "Dirk can take over games" person and would never put him in the same class as the Kobes, Nashes, Lebrons, Wades, etc. But last night’s third-quarter display was impressive to say the least and I found myself feeling sorry for the Dynos, victims yet again to a star player simply "going off." I can’t count the number of times I’ve seen a player reach some career-high or record mark against Toronto but perhaps that’s indicative of the quality of teams Toronto has trotted out on the court the past few years. Yes, it’s getting better, but as evidenced by Dirk last night, we’re not there yet.

Hot – Chris Bosh. At last, this was the franchise player-like performance I was looking for. Bosh fought all game long and while did still make a few poor decisions and missed some defensive assignments, he also played almost the entire match and grabbed a number of huge rebounds in traffic. Perhaps he is still getting his rhythm back? Whatever the case, I’m hoping it’s true when CB4 acknowledged after the game that he had "turned the corner," and this is the type of performance we can expect for the majority of the season.

Not – The Big Rook, Jumpin’ Johnny, and the rest of the "guys in the truck." Nothing like watching a nerve-racking game when the TV screws up every two seconds in a decisive fourth quarter. Yes, technical difficulties happen, but that doesn’t explain some of the random camera angles and the fact that on the game’s final possession, even if it was meaningless, the Raptors camera crew opted for a 10 second close-up of a sweaty Dirk instead…

Moving On – No rest for the weary unfortunately as the Raptors travel to Memphis tonight to play the Grizz. They may be minus one TJ Ford as well who suffered a stinger in his arm during last night’s game and did not return. After the game Mitchell talked about the injury saying that TJ’s "arm was numb, and they’d see how he feels tomorrow."

Mitchell in fact was a lot more talkative than usual post-game and seemed proud of his team’s efforts despite the loss. He for once got down to the x’s and o’s of the game and explained that in the first half he was trying to keep the ball on one side as he knew Mavs’ coach Avery Johnson, like most coaches, liked to get the ball moving from side to side to take advantage of mismatches and poor rotations. Unfortunately in the second half he admitted that some of his younger players (read Jamario Moon) were missing assignments and that allowed much better ball movement for the Mavericks. In addition, he explained that they were quite successful in trapping Dallas’ screen-and-roll plays but in the second half, that same pressure wasn’t there from his club.

Watching the game this was painfully obvious as we started seeing Nowitzki, Howard and in particular, Harris, get to the rim with ease. With a team as talented as the Mavericks, the margin of error is that much smaller and once they got rolling, it was extremely hard to get them slowed down.

So can the Toronto Raptors build on last night’s match to get a much-needed win against Memphis tonight? I believe they can but here are the three keys we’ll be looking at:

1) Interior Play. It’s this simple. Toronto’s offence is most effective when Bosh gets the first touch, makes a quick decision to either go to the basket or kick it back out. A perfect example of this was a play late in the third quarter when the Raptors were desperately trying to fend off the Mavericks surge. The ball went from Jose into Bosh, the double came, he kicked it back out and then, swing, swing, swing, 3 point bomb from Parker in the corner. But it’s this inside presence that makes it all possible. If Bosh gets going early it forces doubles or close coverage allowing the proper spacing for Toronto’s long-range bombers. Therefore once again tonight it’s imperative that Chris play with the fire and vigor he displayed last night. Memphis isn’t the defensive team that Dallas is and minus Darko, CB4 should have more than enough room to operate and get to the line.

2) Transition defence. Memphis has a number of athletes such as Rudy Gay and Hakim Warrick and they would like nothing better then to ram the ball down the dino’s collective throats tonight. The Raptors have to rebound the ball and prevent long outlet passes for easy dunks and lay-ups. This is totally a winnable game for Toronto but they must dictate the pace and to do that, they need to control the Grizzlies in the open court.

Let's not have Dirk part II from Mike Miller tonight...