3 In the Key - Raptors Game-Day Preview vs. Mavericks

Share All sharing options for: 3 In the Key - Raptors Game-Day Preview vs. Mavericks 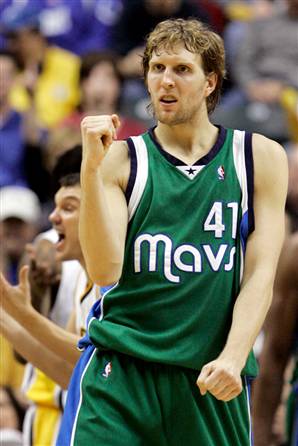 No-one seems happy right now. For every "good" thing about the Raps so far there seems to be two "bad" items on the list. Maybe it is just the Toronto sports landscape that many of our readers have alluded to. No-one can deny it's very much a "what have you done for me lately" kind of sports town. There is just a sense of uneasiness when it comes to this team. The fans, ourselves at the HQ included, want so much from the club and there has been little shown thus far that expectations, despite whether they are reasonable or not, will be met.

In my opinion the hot topics early in the season are two fold. First, is Coach Mitchell. Debates surrounding Sam and his coaching style, strengths and weaknesses are nothing new. You would think that the Coach of the Year award would have given him some leeway but that's not the case. What's the deal with the rotations? Has he developed as a coach in terms of x's and o's? Can he keep everyone happy? Can this team develop much needed chemistry and consistency DESPITE rotations that make little sense?

Second, and maybe more importantly (and undoubtedly linked to the first issue), is that all three cornerstones of the franchise have been disappointing in some capacity thus far. TJ Ford's decision making, Bosh's inconsistency and Bargs sophomore struggles are all being well documented. How is it that all three of these players are failing to meet expectations at the same time? When will they turn it around? Are these the right cornerstones and can they mesh together?

These are big issues. Actually they don't get much bigger and there is reason for concern. Sure it makes for good debate but professional sports is all about winning games and so long as these questions are out there don't expect the Raps to win anymore then they lose.

A bit of a downer forecast for sure, but let me tell you what the silver lining is in all of this (and no it is not that they are three games ahead of the pace they set last year). Even though the coaching has been somewhat nonsensical and the stars have not been playing well, the Raps are only one game out of third place in the East. It's not just the Raps that have been mediocre. Mediocrity seems to have infested the Eastern Conference. Outside of Orlando and Boston there is no team (as of the time I wrote this) with a winning percentage over .600. Compare this to the West where seven teams have a winning percentage of .600 or better.

Sure the Raps have big issues but they sure aren't the only ones. The Bulls? Thoughts of championships have been replaced with a case of mistaken identity. The Heat? Only a couple seasons removed from their title Wade is calling out Shaq and Riley is threatening to hit the hardwood himself. Cleveland? Arguably the best and most marketable player in the league and the team can't even sign their own free-agents to help him out.

No question things are far from perfect in Raptorland but things undoubtedly could be worse and things should work themselves out in time. That's more than can be said for some of the teams just mentioned. It is in spite of these significant issues that the Raps remain in contention and within striking distance of the best in the East (even if that means a collection of 6-12 teams). I do however, use the term "best" lightly.

The thing is that Toronto could easily be up there with the Bostons and Orlandos at this point and the recent losses could really hurt Toronto's final playoff push in the end. These were winnable games against teams Toronto should be able to beat and with an ungodly road trip coming up around Christmas, the Raps need to capitalize now and get every win they can. This is something Micheal Grange from the Globe and Mail recently alluded to in his blog. (Full props to him for going through each of Toronto's 3 point shots in the fourth quarter...something in retrospect that we wanted to do here at the HQ.)

On to tonight's match-up and the three keys:

Will the real Chris Bosh, please stand up?

2. Play with toughness: When people think of the Mavs they think of Dirk, Terry and Howard. What many forget is that they also have a pretty tough team. Diop, Dampier, Stackhouse, Bass and Hassell all bring a toughness to the court. Can the Raps match or will they be pushed around and dominated on the glass. Will the Raps shy away from driving to the hoop and settle for long range jumpers? On the flip-side can the Raps make the Mavs think twice before attacking the rim? I'm looking to players like Hump, Garbo, Baston and Delfino to man up and foul hard.

3. Start Strong: If there is one city where you don't want to fall behind early it is Dallas. The fans add an atmosphere that makes a comeback very unlikely. If the Raps can't get things going early I expect a lot of TVs to be shut off well before the final buzzer sounds.

The Raps played Utah tough, can they do the same to another Western Conference powerhouse? My gut says unlikely but that's why they play the games.