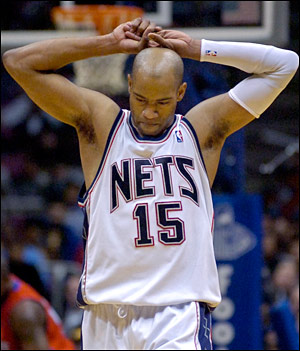 Lacing Them Up – There’s not much to say about this one. The Raptors looked a bit sloppy at the start but Sam Mitchell quickly found the remedy off the bench in the form of Juan Dixon, Carlos Delfino and Jose Calderon. From there on out, the Raptors could do no wrong with Chris Bosh even hitting a 55-foot buzzer beater to end the half.

A Numbers Game – Let’s start with 106 to 69. This game was over way before Chuck pulled out the requisite "Salami and Cheese." The Nets looked dead all game long and when the fourth quarter rolled around with the Raptors up by 40, Maceo Baston, Jamario Moon and Darrick Martin might as well have suited up.

45 - 24 – this was the difference in bench points tonight in favour of the Raptors. We talked about bench play being one of the keys for Toronto tonight and sure enough it was. The "new and improved" Nets bench barely showed up with the exception Sean Williams who had four blocks.

As for other stats, well take your pick, the Raptors dominated in every category; 50 per cent from the field, almost 60 per cent from beyond the arc, and 15 of 16 from the free throw line. We’re not even going to get into the Nets stats – brutal.

Juan Dixon had been playing like he's back with the Terps...

My hat goes off to Delfino as well, who came in and did a great job defensively on Vince Carter. Delfino didn’t let Carter get to the rim, stripping him repeatedly, and at the other end was active on the glass and knocking down shots.

And finally sparking the turnaround, Jose Calderon. It’s absolutely amazing how much his shot has improved over the course of two plus years as now he’s almost automatic from long range. His combination of scoring and passing (he had 10 points and eight assists in 20 minutes) was just what the doctor ordered and the Raptors were off to the races.

Hot - "They gave me the ball, I was open, I shot!" Andrea Bargnani spoke this quote after tonight’s win and it had me laughing out loud. That’s exactly what Il Mago did and with a nice mixture of wicked pump fakes and long-range bombs, Bargnani killed the Nets all night. He was also solid on the boards (he had six rebounds) and defensively, clogging up the lane.

Hot - How about the entire Raptor team in fact. This is the second game in a row where it seemed that offensively, Toronto could do no wrong.

Not – And on the other end, the Nets. Maybe they were tired from their OT win over the Bulls. Maybe the Raptors wanted this game a little more than they were letting on…whatever the case, this was a dismal performance from all but Richard Jefferson. It’s only game two of the season, but I’m sure this isn’t how Lawrence Frank wanted his team to perform this evening.

Not – Ok, one exception to the entire Raptors team, Jose Garbajosa. Garbo didn’t play until seven minutes left in the fourth and the Raps up by 40...that’s the first red flag. The second is that Antoine Wright drove by him like he was a pylon soon after he entered. Yes, Garbo hit a long-range bomb, but to me he just looks a step slow. Here’s hoping that Mitchell and co. are just bringing him along slowly.

Moving On – With the Celtics clobbering of Washington (a game which featured Boston fans taunting Agent Zero with chants of "Giiiiiiiiiiilbert") it sets up a great match Sunday. Both teams look to be ready to start the season and it should be a real battle. Watching some of the Celtics’ game tonight, their starters do appear to be clicking. But can they deal with the Raptors depth? And for that matter, can they deal with the Raps D? Tonight was one of the best defensive performances I’ve seen from Toronto in many a game and the entire team just looks so focused, even this early in the season.

I also have to give credit to Sam Mitchell this evening. In a game where I thought the "bigs" would rule, Mitchell forced the Nets into a game of small-ball, spread out the court, and let his team go to work. It’s great to see the options that Sam has and I can’t wait to see them in use on Sunday.