3 in the Key – Game-Day Preview vs. Nets

Share All sharing options for: 3 in the Key – Game-Day Preview vs. Nets 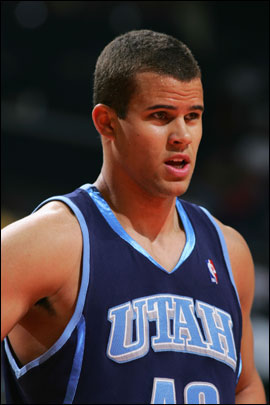 "For me, I come into this season thinking I'm going to be a big part of what we do, coming off the bench and helping us win."

How much more credit can we give the Legomaster, Bryan Colangelo? So far he’s kept Chris Bosh, drafted Andrea Bargnani, nabbed TJ Ford, brought in unheralded players with upside like Jorge Garbajosa, Carlos Delfino and Anthony Parker, and most unbelievably, traded Hoffa!

The quote above is in fact from Kris Humphries, the main player Toronto acquired by dealing Araujo to Utah, who quietly signed a to a three-year extension worth about $9-million that will keep him in a Raptors uni through the 2010-11 season.

Watching Humphries bang away against Philly Wednesday night, and as I had predicted, be the primary back-up to Bosh at the 4, I mused out loud to Howland about just what a steal the trade that brought Humpty Hump here was becoming. I mean, I think fans were just happy to get rid of the Brazilian experiment regardless if Humphries ever played more than five minutes. And now, Hoffa’s in Russia, and Hump is quietly turning himself into a solid addition to this team. As one of our readers mentioned, the signing didn’t get much press, but BC has once again made sure to keep key pieces of the team intact without overpaying, or over-committing in terms of contract longevity.

And I lead our first "3 in the Key" off with Humpty because I think he’s going to be a big factor tonight for Toronto.

The Raptors face old foes the New Jersey Nets for the first time since last year’s playoff debacle in what should be another good test for Toronto. With the Celtics up on Sunday, a win would start putting some distance between the Raps and their Atlantic Division foes.

The Nets are coming off an exciting OT win over the Bulls in which forward Antoine Wright scored a career-high 21 points off the bench for Jersey. The usual suspects Kidd, Carter and Jefferson played a large part in the win as usual but it was Wright’s 14 points in the fourth quarter and overtime that made the biggest difference in the end.

Interestingly, Jamaal Magloire and Nenad Krstic played only 30 minutes combined and weren’t able to be much of a factor defensively or on the glass. Against the smaller Raptors, I’m expecting a lot more of these two and therefore, a lot of Kris Humphries and Rasho Nesterovic.

1) My first key then tonight will be the battle of boards. The Raptors were out-rebounded 47 to 35 by Philly on Wednesday and with the exception of Reggie Evans, the rest of the team didn’t have a great rebounding game. That’s why if the Raptors don’t do a better job on the glass against a team like the Nets, it could be lights out early. In particular, the Raptors’ "bigs" need to do a better job all-around as it was the guards, Anthony Parker and Carlos Delfino, who were the top glass cleaners.

2) Secondly, Toronto’s perimeter D needs to tighten up. New Jersey has a lot more scoring power than Philly and the Raptors allowed way too many easy looks for the 76ers. If New Jersey gets open inside to the same degree, or is able to get some of the wide open looks Kyle Korver did, it’s going to be a long night.

3) Bench play. Yes, this probably could be a standard for each preview this season. Toronto’s bench let Philly back into the game Wednesday night and they can’t continue to do that if they’re going to win against the New Jerseys and Detroits of the league. New Jersey added depth this off-season, not only by signing the likes of Magloire and Darrell Armstrong, but also by seeing other players heal up. Toronto seems to have a distinct advantage in this area and it’s going to be key tonight for them to pick things up a notch when the starters go to the bench for Sam Mitchell.

Above anything though, I’m extremely excited to see how this slightly tweaked Raptor squad fares against last year’s playoff foes. I’m expecting New Jersey to play Chris Bosh much the same way they did last spring but will this be as effective now with Jason Kapono on the wing ready to bang down shots?

I have a strange feeling that it’s games like this one where we’ll see just what sort of return on investment the team gets from it’s new acquisitions...

PS - If you haven't noticed, we've been making adjustments to the site in preparation for the new season. There have been a few quirks and quarks but all should be running smoothly by Monday...