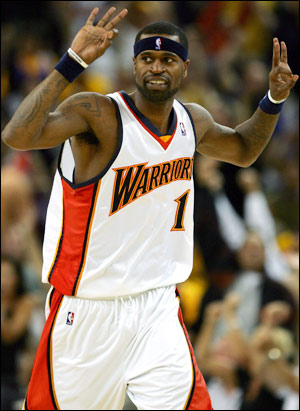 Lacing Them Up – The home inconsistency continues.

The Toronto Raptors started off slow, turned it on near the end of the first half and into the third quarter, and then went ice cold in the fourth. This allowed Golden State to hang around before Baron Davis took over late in the game as the Warriors got the win.

In yet another game, Toronto just couldn’t seem to buy a bucket when it mattered most. The team hit less than 20 per cent of its three-point attempts and didn’t hit their first three in the fourth quarter until it was too little, too late.

The Raptors’ defence didn’t show up in this one enough either as Golden State in the first half at one point was shooting over 60 per cent.

That combination kept the Warriors hanging around until Toronto’s shots stopped falling.

That was the difference today in terms of points in the paint. The scary thing is that besides some offensive rebounds from Biedrins, most of this scoring came from the Warriors’ wings who got into the paint at will for dunks and lay-ups. In our follow-up with Atma Brother #1 from Golden State of Mind.com, we touched on this:

RaptorsHQ: The Warriors lack a real offensive post-presence but have so many athletic guys who can get to the rim as we say today. Do you see GM Chris Mullin looking to get an inside scorer this year or does the team even need that considering all the slashers they have?

GS of Mind: Great question. Well they do and they don't. Baron Davis, Monta Ellis, Stephen Jackson, Al Harrington, Mickael Pietrus, and Matt Barnes *can* all get to the rim. The problem is they all love taking perimeter shots and other teams know the way to beat them is to force them to shoot rather than drive. Smart opposing coaches know to sag down or play zone and make it tough for the Warriors to penetrate and score or drive and dish out for a good looking J. It's misleading to think that just because these guys can get to the rim this team doesn't need an legit offensive post presence or that they can all get to the rim consistently without that post threat. It's tough to drive when the other team knows that's the only real way you can beat them.

I can't say for sure whether Mullin is looking right now for an interior player, but he needs to be. You can't live and die by the jumper or rely on consistent driving from swingmen in this league especially if your defense is this bad. Last year was a different story as they were playing great D down the stretch. If they can get to that level of defensive intensity, they might be able to get away without a post presence if they can also step up their rebounding and free throw percentage.

The trade that makes the most sense right now is flipping that $10 million to our neighbors up north in Sacramento for Ron Artest. The Kings are in rebuild mode and Artest is sure to opt out after this season for a more lucrative deal which he's undoubtedly get. Ron-Ron would instantly give the Warriors some semblance of a post game and improve both their perimeter and interior D. With Artest, Jackson, Harrington, and BD (although he didn't consistently show it today) the Warriors would have a solid defensive unit that can D up the opposition without having to rely on gimmicky zones, which don't work in the NBA over the long run, as much. Plus as GSoM friend Dave Zirin pointed out Ron Artest is a changed man:

This trade just makes too much sense for both parties involved, but with Cohanomics you never know how many cents are trying to be saved at misguided attempts to improve the bottom line.

"Smart opposing coaches know to sag down or play zone and make it tough for the Warriors to penetrate and score or drive and dish out for a good looking J…It's tough to drive when the other team knows that's the only real way you can beat them."

I had to re-quote that segment of Atma Bros’ answer because it’s exactly what the Raptors’ DIDN’T do. I don’t know want to say Mitchell didn’t hammer this into his guys, but we didn’t see any zone looks today, and the Raptors did a terrible job of forcing the Warriors to be "a jump shooting team," hence all the points in the paint.

The Turning Point – The turning point in this one was really the fourth quarter. Toronto seemed to be cruising towards a victory as Golden State could never just get over the hump and then things started to go downhill. Shots weren’t falling, shots were being forced, the ball stopped moving to the open man, and poor decisions were being made leading to easy transition baskets by the Warriors.

Temperature Check – Hot - Carlos Delfino and Jamario Moon. You can’t overstate how valuable these two have been to the Raptors. Blocks, charges, rebounds in traffic, you name it. They’re streaky shooters which affects Toronto in crunch situations at times, but it’s hard to imagine the team without them at this point. They give the Raptors an injection of athleticism it desperately needs, especially as Chris Bosh is struggling.

Lukewarm – TJ Ford. It’s tough to know what to say about TJ today. I purposely waited a few hours before writing this as my last impressions were enough to make me put him in the "not" category. However, as much as he struggled in the fourth quarter and forced the action at times, TJ was the reason Toronto was even in this game. He took what the defense gave him most of the time, found the open man and most impressively, was extremely aggressive going to the rim using a combination of speed and fakes to blow by his defender time and time again. This is the TJ I’d always envisioned when he was acquired from the Bucks, a Tony Parker like speedster with better passing ability who ccould get into the paint at will and find open looks for his team-mates. Don Nelson even stated post-game that TJ Ford was "a handful" and "as close to Steve Nash as he’s seen." I’m not sure about that considering the inconsistencies in his long-range shot and sometimes still iffy game management, but TJ has definitely shown flashes of brilliance this year and hopefully his consistency will improve as the season goes on. I’m not ready to throw him to the wolves yet and in some ways it’s hard to fault him when the real go to player has been anything but in most of the games this season.

What ever happend to this version of CB4?

Moving On – It doesn’t get much easier for the Toronto Raptors with the Dallas Mavericks up next. The Raptors’ inconsistencies have been maddening at times and it showed on Sam Mitchell’s face post-game.

Mitchell looked visibly frustrated when speaking to the press and couldn’t seem to explain the loss. He did mention however that CB4 needs to play better and that perhaps some of his players like Jamario Moon needed to step in to their shots a bit instead of looking to make the big 3.

I found that interesting considering he was the one who was playing both in crunch time minutes. Both provided some huge offensive rebounds and attacked the glass but perhaps only one with someone like Jason Kapono would have been a better idea? Or in fact, with Andrea Bargnani looking much more aggressive than Bosh and having more success offensively, maybe CB4 should have sat the last few minutes out?

I’m no NBA coach, but Don Nelson had his players run this game to perfection while from the Toronto side, we once again only got samples of what this team should be capable of doing. Yes, the Celtics just lost to the Magic, but I hardly take solace in that considering this Raptor team should have put the first L in the Boston record books weeks ago.