3 In the Key – Raptors Game-Day Preview vs. Warriors

Share All sharing options for: 3 In the Key – Raptors Game-Day Preview vs. Warriors 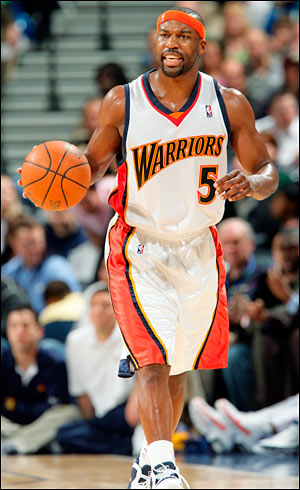 The Toronto Raptors take on the Golden State Warriors and right now it’s anyone’s guess as to who gets the nod to start the night in the 5 spot. I’d say it will be Maceo again if Rasho still needs some rest but Andrea Bargnani makes some sense as well. Whoever it is, considering they’ll be matched up with the human offensive rebound machine, Andris Biedrins, they need to get the job done on the boards.

The hope of course is that the Golden State Warriors will be too sleepy to get on the glass considering what will feel like a VERY early start for them. While the Warriors won their last contest, it was only their first of the season in what’s been a very slow start for one of the most surprising teams in last year’s NBA playoffs.

We asked our colleagues over at Golden State of Mind, one of the best blogs in the NBA, their take on their squad’s best tortoise impression out of the gate. They enlightened us and gave their thoughts on not just that, but today’s match as well:

1) RaptorsHQ: The Warriors obviously had an amazing season last year but have started slow out of the gate. Why do you think that is? How much do you attribute the slow start to the loss of J-Rich?

GS of Mind: Both Jason Richardson and Stephen Jackson played tremendous roles in the Warriors amazing 16-5 run to make the playoffs on the last day of the season and their upset of the #1 seeded Dallas Mavericks last year. The Warriors have been without both of them for the first 7 games of this season (J-Rich was traded and Action Jackson was suspended), so this really hasn't been the same team that delighted the entire hoops nation last Spring.

That's a big reason for the slow start, but the easiest one to pin point is the Warriors' absolutely atrocious D thus far. Through 7 games they're giving up a whopping 116.3 ppg, easily the worst in the NBA. Fans, coaches, and players from opposing teams love it- they get to see career nights from their fellas against the Dubs, but over in the Bay it's become quite nauseating. Two other numbers that make Warrior fans cringe- 49.6% Opponents FG and 45.2% Opponents 3pt.

The Warriors do miss J-Rich's fire, intensity, scoring, rebounding, passing, leadership, and locker room presence, but it's tough to say whether their 1-6 start would've have been all that different with JR on board. Two of the Warriors six losses this season came against the Utah Jazz (see RECAP: Warriors 96, Jazz 117 - Can we get a do over? and RECAP: Warriors 110, Jazz 133- The Good, The Bad, The Ugly and Oh the FUGLY:) and with J-Rich (and even Jax for that matter) the Warriors were still probably going to lose those 2 games. To give you an SAT analogy – Jazz : Warriors as Warriors : Mavs. I could see the Warriors with Jason Richardson beating the Mavs and Pistons this year though since there's a precedent, but that would still only put this team at 3-4.

Having said that I'm not a huge fan of trading a player that flows so well with Baron Davis in the backcourt that it's like poetry, and fits in Nellieball (a SG who can play the 3 hit treys, rebound the rock, and pass decently) for another project who Nellie continually says is 2-3 years away from being a major player in the NBA. With the plethora of swingmen on the Warriors someone had to go, so trading Jason Richardson is understandable, but for a package that most likely won't help the BD in his prime and Nellie in the twilight of his coaching career is just a head-scratcher. After twelve years of "rebuilding" the 2007 playoffs were such a wild and crazy ride for Warriors Nation. Playoffs are fun for us, not rebuilding.

2) RaptorsHQ: How much fun has it been for you guys to watch Nellie ball compared to when Coach Montgomery was there? Must be a similar feeling to changing GM's from Rob Babcock to Bryan Colangelo!

GS of Mind: I think the report cards say it all.

3) RaptorsHQ: What do the Warriors have to do to get the W against the Raps? What things have to happen to give the Warriors their best chance?

GS of Mind: There's 3 keys for the Warriors:

1) Wake up! The Sunday 10am PST start time is really early for West Coast
teams.

2) Pretend like it's Monday. Last year the Warriors were 1-5 on Sundays. It's just not their day.

3) That defense thing. Chris Bosh is going to get his, but if the Warriors don't change their ways this is going to be the day Raptors fans fall in love with Jason Kapono. Last season this UCLA sharp-shooting alum lit the Warriors up for 27 points.

Also check out The W Column: Counting W's for Week 3.

Big ups to Atma Brother #1 of Golden State of Mind for those thoughts and his last point about defence leads to our first key of the game in terms of a Raptors’ win.

1) Don’t get caught up playing Nellie-ball. The Raptors can play an up-tempo style and like to get out and run but the last thing I want to see is the team trying to replicate what G State excels at. In other words, yes if the shot is open take it, but if Toronto starts pulling up for three pointers early in the shot-clock off the break, I fully expect Sam Mitchell to blow a gasket.

2) Defensive execution. The Warriors should have both Stephen Jackson and Mickael Pietrus back giving them a gaggle of athletes and match-up problems for the Raptors. It’s crucial that Toronto zone-in early on the defensive end as while the Warriors have struggled to get stops as GS of Mind discussed, this is a team who can get to the rim and blow a game wide open on the offensive end. Fans have seen Golden State throttle the Raptors before and if Toronto can’t keep Nelly’s run-and-gun crew in check, it’s going to be a long Italia afternoon.

3) Take advantage early. The travel and yawn-enducing start should give the Toronto Raptors an advantage over the Golden State Warriors tomorrow. The hope therefore is that unlike the Pacers’ game, the Raptors can pounce early and often on the Warriors allowing them to put this one away early. Laugh all you want, but I WILL play Biedrins at shooting guard...