Share All sharing options for: Tip-In, Toronto Raptors Post-Game: A Dime a Dozen 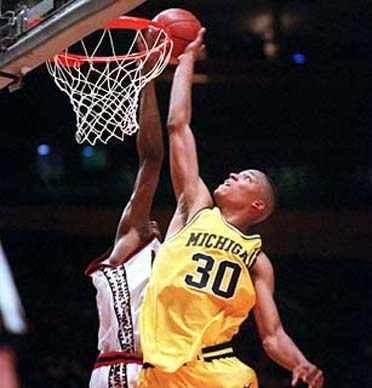 I’ve spent the past three weeks trying to get a read on what the regular rotations will be to no avail. Just when I think Garbo has been outplayed in practice and therefore not going to see game-time, he plays 24 crunch-time minutes last night in the Raptors win. And after I’ve questioned what the point in signing Maceo Baston at all was, he not only plays almost 20 minutes but STARTS last night’s match!

The Raptors downed the Pacers 110 to 101 in a game that featured some sloppy first half execution from the Raptors, some terrible rebounding, but some sizzling point guard play and shooting from long range in the second half to seize the victory.

That’s what the Toronto Raptors shot from three-point range last night. The good news is when the team is going like this, they are incredibly hard to stop. Pacers’ head coach Jim O’Brien after the game talked about how Toronto hit some ridiculous shots and how great a job they did of spreading the floor to give their shooters room. I agree as most of Toronto’s shots were good looks within the flow of the offense and Sam Mitchell had a nice combination of players contributing from long range...especially Anthony Parker, who’s 66 foot bomb to end the third quarter seemed to separate the Raptors from the Pacers once and for all.

The bad news is, we've sure seen the other side of the coin when these shots aren't falling.

That’s the total number of rebounds and number of offensive rebounds the Raptors allowed the Pacers to grab last night. This was one of the main differences in the first half as the likes of Greg Foster continually got inside position for second chance points. Maceo had a nice dunk and played some solid positional defense, but the starters missed Rasho’s rebounding presence as Baston had only two boards in 18 minutes of action.

The Turning Point: I felt the turning point in this game was an offensive rebound by TJ Ford in the third quarter. You could point to Jose’s big three late in the game, Bosh’s And 1 to bail the team out, you could even say you felt Toronto was going to win this game from the tip, which I did. But this one tiny play by TJ had a major impact on the Pacers. TJ had been wreaking havoc offensively all quarter and Toronto began to take the lead. Indiana was still hanging around on some hot long-range shooting from Jamaal Tinsley though and the Pacers looked like they were going to fight this one out till the end. However on this play, I noticed how TJ tracked his teammate’s missed shot all the way and anticipated where the rebound would fall, snatching it from Danny Granger. Indiana looked like they had finally gotten a solid stop only for TJ to get the rebound, reset the offence, and allow Toronto to push its lead even further. Great heads up play and I really felt that as close as Indiana got in the fourth quarter, the game was never really in question.

Garbs played a solid game last night, but any odds on how much he plays tomorrow?
Temperature Check: Hot – Jorge Garbajosa. Ok, Garbs wasn’t in "he can do no wrong mode," but the mere fact that he went from playing in only garbage minutes, and not many at that, to 24 crunch time minutes bears a spot in this section. He was almost Toronto’s top rebounder on the night and hit three of his seven shots so he was definitely no slouch either. As I previously mentioned, I’m not sure what to think about his role with the team now but he certainly didn’t look injured to me last night. Perhaps Rasho’s minor injury in that sense was a blessing in disguise?

Hot – RaptorsTV. Raps TV probably didn’t intend to be in the "hot" category. But two instances of the highest form of unintentional comedy put them smack dab in the middle.

First we had Jack dancing with the Four Corners Sound Crew DJ Captain Kirk and the Raptors Dance Pak. PLEASE someone find this on the net or on Youtube…seeing Jack with a Raptors hat cocked to the side like Flavor Flav and pumping his fist was too funny for words.

But then RaptorsTV topped that off post-game. You can’t put into words the expression on Paul Johnson’s face as during Center Court HQ, fans in the background chanted "we want Norma!" I was doubled over laughing at this one. PJ was as white as a ghost and looked like he didn’t know whether to laugh or scream.

Not – Il Mago. The other blessing in disguise last night for Garbs may have been Andrea Bargnani’s poor play and three fouls in five minutes. He went 0 for 1 with 1 turnover last night and really looks right now to have taken a step back from his play through the season’s first three games. Of course, the local media was all over this after the game asking about Bargs’ lack of playing time and production. That resulted in the following comment from Sam Mitchell:

"We won a basketball game and we had eight or nine guys play well." "Don't ask me about that. That is just trying to stir up something. In 82 games, you are not going to play great every night."

I’ve gotta agree with Sam on this one. Today a lot of the media seemed a bit perturbed by Sam’s response but I’m not sure why. All we’ve seen so far this season from Mitchell is that besides Chris Bosh, TJ Ford and Anthony Parker, there’s not much rhyme or reason to any of the minutes doled out to any other player. Sure the argument could be made that for instance last night, Baston started so Hump could continue his solid play off the bench, Andrea could keep gelling with the second unit and Maceo knew the Pacers better than anyone else having played for them last year.

But would it really have surprised anyone if say Bosh had started at the 5, with Hump at the 4? I mean, can you name ONE other team in the league who would start a player who hadn’t even dressed for seven of eight games and hadn’t played a single minute?

So there’s really no point worrying about players’ minutes from here on out. Some nights I’m sure we’ll have Garbs playing 20 to 30 minutes and some nights we’ll have Juan Dixon doing the same thing. The players seem to understand that and as long as they can come into each game mentally and physically prepared, well we’ll see where this depth takes us.

I still worry about finding some consistency rotation-wise but Sam’s proving that it’s still early in the going and hey, a 5 and 4 record in spite of four different starting line-ups through nine games ain’t so bad.

For the Toronto Raptors, it’s Italian Day tomorrow at the ACC as Marco Belinelli and the Golden State Warriors are in town to take on Andrea Bargnani and the Raps.

Golden State got its first win of the season last night over the Clippers and will have suspended guard Stephen Jackson back in action. The Warriors have struggled so far this year, particularly on the defensive end and the Raptors need to pounce right from the get-go, something they neglected to do again last night.

We were hoping to have a chat with the cru from Golden State of Mind today, hence today’s late blog entry, but hopefully we’ll still get their take on things prior to tomorrow’s afternoon tip-off.

Oh…and speaking of afternoon tip-off’s, we encourage all Warriors to go out tonight and experience the hospitality that the T-Dot’s fine selection of clubs provides…