3 In the Key – Toronto Raptors Game-Day Preview vs. Pacers

Share All sharing options for: 3 In the Key – Toronto Raptors Game-Day Preview vs. Pacers 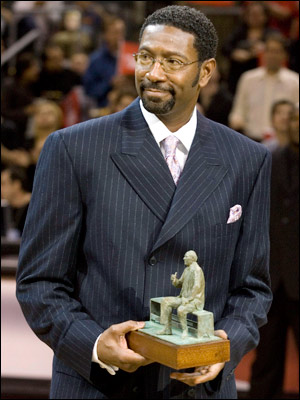 The Toronto Raptors’ loss on Wednesday night spurred a lot of discussion yesterday on the site.

-Bosh needs to attack the rim regularly to open things up for his team-mates.

-Sam Mitchell needs to do a better job of orchestrating plays on offence.

Those seemed to be the main topics of conversation overall with a little "what’s up with Andrea?" and "where’s Garbo?" thrown into the mix. I’d like to touch on the Mitchell situation though for a second.

Two of our readers in particular were discussing Mitchell’s coaching abilities and whether or not he had been out-coached by Jerry Sloan in Toronto’s loss to the Jazz. It’s something Howland and I discussed after the loss as well. It’s true that Sloan’s methodology proved to be superior on the night in question but let's not forget that Sam's such a young coach compared to many of the other greats that were mentioned. The Pat Rileys and Phil Jacksons had to learn somewhere as well and would surely tell us that they know many more tricks of the trade now than they did when they first started out.

Therefore it wasn’t that Howland and I felt Sam was out-coached, it's just that he doesn't have the wealth of experience and wisdom of a Jerry Sloan. That’s something you acquire over time and that's also why you saw Sloan run back-door cuts all night and execute great time-out plays, ones that looked honed over years of overseeing the Jazz offence. That doesn’t mean Sam’s a bad coach though. He’s still learning the ropes and you can’t just give up on a developing talent whether he’s a coach or a player. If that were true, the Lakers wouldn’t have Kobe Bryant.

Many forget Kobe's first few seasons with the Lakers. He was extremely talented for his age but I still vividly remember him breaking plays in the playoffs and air-balling shots to try and beat the Spurs himself. But the Lakers were patient with him playing Kobe behind Eddie Jones until he developed and well, I still hate the guy, but there’s no denying that he’s one of the top three players in the league. I’m not saying Mitchell is Kobe, or even the next coming of Red Auerbach, but he deserves some patience from fans and management. Our old website used to be rife with comments calling for Mitchell’s head but now it’s only the occasional "axe him" post. Yes, Mitchell infuriates me at times with the minutes he doles out, but so has everyone on the Raptors at one point or another! On the other hand I see his upside and hope he continues to grow and improve as a coach. He’s already improved in my books, the team looks better than it has defensively since the days of Kevin O’Neill, and the rebounding, while still far from incredible, has at least passed the litmus test so far. Colangelo’s been pretty good at mining basketball talent, and I think he’s got another solid prospect in Mitchell.

Tonight Mitchell’s Toronto Raptors against the Indiana Pacers in a match that will probably address many of the aforementioned topics as Toronto looks to get back on the winning track.

The Indiana Pacers are coming off a loss to the Washington Wizards and after a perfect 3 and 0 start, have lost their last five games. Toronto has to pounce on this and that’s our first of three keys:

1) Strong Start. The Pacers have been struggling as we mentioned and the Raptors can’t afford to walk through the first quarter and let them get their confidence. Indiana is one of the better scoring teams in the league, just above the Raptors in the overall rankings, and love to shoot the 3. Toronto’s offense has been sporadic as of late and a barrage of 3 pointers could put the Dinos in an early hole that they just can’t climb out of.

Granger is one of the Pacers the Toronto Raptors DON'T want getting out in transition...

3) Good shooting. Let’s keep this last one simple, Toronto needs to hit shots. Against Utah Wednesday night they had the open looks, but just couldn’t knock them down. In particular, the Raptors need a much better shooting performance for their three main guys – Chris Bosh, TJ Ford and Andrea Bargnani. And if the jump shots aren’t there, I expect Toronto to get to the line. It’s embarrassing that this is the third best free throw shooting team in the league and yet 26th in terms of free-throw attempts. The Pacers are giving up the sixth most points in the league to their opponents and I’m expecting Toronto to take advantage tonight by getting to the line.