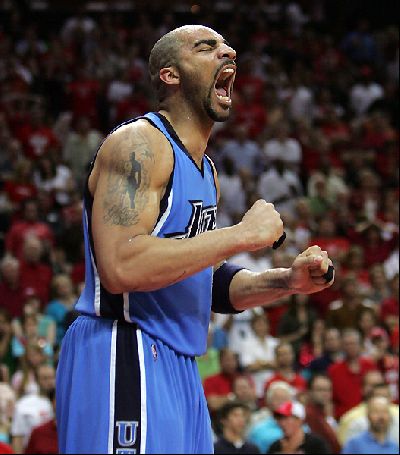 Lacing Them Up: Looking for a sleeper to come out of the Western Conference this year? Try the Utah Jazz. Coming off a solid season last year where they managed to go deep into the playoffs this team has All-Star talent at almost every position. With fresh legs and a few practices under their belts this was going to be a true test for the Raps. There were some great match-ups to look forward to including Deron vs. Ford, Boozer vs. Bosh and Moon vs. Kirilenko. Unfortunately the Raps came out on the short end of at least two, if not all three of these match-ups resulting in a tough 92-88 loss.

A Numbers Game: How about 6:33 - as in the amount of time left in the game before Carlos Boozer was assessed his first foul. That’s right, it took almost the whole game before anyone on the Raps decided to challenge the big man. For most of the game the Raps were content, including CB4, to settle for the outside shots, which much to the chagrin of Raps fans, and undoubtedly Sam Mitchell alike, were simply not falling. It was only at this point that CB4 actually made an aggressive move to the hoop drawing the foul. Perhaps not surprisingly it was immediately after this that the Raps offence started to click. It was if at this point a little light went on in CB4's head that said "maybe I can take this guy". From that point on Bosh was aggressive with the rock and good things finally started to happen with the offence. The problem was it took way to long for this light to go on.

Speaking of Boozer and CB4, the later could really take a page out of the former’s play-book. Both players have solid midrange games, can run, put it on the floor and more importantly, finish. The difference is Boozer is not satisfied with the outside jumper and likes to draw contact. CB4 sometimes seems hesitant. Undoubtedly there is a huge difference in how these guys are built and Boozer’s body is more likely to take the punishment (despite injury history) but Chris, in particular against slower bigger players needs to be willing to take the punishment and put these guys into foul trouble.

The other number that fascinates me about this match-up was minutes played. HQ favorite Jamario Moon, a 27 year old rookie, led the Raps in minutes on this evening with 33 and change. How unlikely was this when the season started? What were the odds in Vegas on this guy making the team, let alone leading the team in minutes in ANY game. The best part about this story is he is getting more minutes because damn-it, he’s earning them. Tonight Moon looked more confident on the floor and his play reflected that. The highlight was undoubtedly late in the fourth when he was open with the ball outside the three point line. You could tell he was thinking about the shot, maybe even a little hesitant, but he let it fly. He nailed it. Gutsy shot. Great result. Is there anyone else you would want starting at the 3 spot right now for the Raps?

The Turning Point: There were a variety of times when one team or the other could have taken advantage of particular miscues and gone on a run. The turning point for me however was on an inbounds play when the Jazz lobbed a ball from the baseline over TJ Ford’s head and into Deron Williams waiting arms for the easy two. It was at this point when looked at my friend and said something along the lines of "Ford is going to take offense to that and force the issue". Inevitably Ford decided to take the game into his hands for better or worse. The result was for worse.

Just trying to explain TJ Ford’s decision making at times this game is extremely frustrating. He gets caught up in the one-on-one match-up. Franchise was telling me after the game that Jack Armstrong was alluding to that very fact during the broadcast (gotta love Jack for calling it how it is). The last play of the game is the perfect example of why, as the PG you CANNOT get caught-up in that. This is not street ball. Looking for the three to tie the game late Mitchell called time-out to pull Moon and insert his best long range shooter, Jason Kapono. The Raps had their shooters out there. Seems smart. Apparently no-one told Ford, or he simply did not care because his mind was already made up. He was taking the last shot.

The last offensive possession was downright humiliating. On three occasions Ford tried to jack the three. On the first two attempts he got caught mid-air without a shot having to drop the ball of to Hump (who smartly gave him the ball back from that range). The third time Ford heaved, missed and that was pretty much it. No looking for the shooters. No passing the rock. Deron had made him look foolish and Ford was going to try and do the same to him in return.

It’s not that Ford didn’t have the right to take the shot, he did. In an earlier possession Ford hit a clutch three. The difference? It was within the flow of the offense. It was not a 1 on 5 situation as it seemed to be on the last possession. ook, if TJ Ford is going to take the next step towards becoming an elite PG in the league he absolutely must leave playground attitude behind. Think Nash would ever do this?

Temperature Check: Hot - Try the starting swingmen for the Raps. Both Parker and Moon had solid games and managed to hit some shots while everyone else struggles. Unfortunately their counterparts off the bench couldn’t match their play.

Hot - AK47. Sure he was 1-6 from the floor but this guy does so much on the floor that scoring is like a bonus treat. His rebounding, assist, steal and block numbers from this game were all very impressive. It looks like he is finding his form on this team which considering the off-season turmoil is surprising. If Kirilenko is happy with only taking a few shots and doing everything else this can only bode well for Jerry Sloan.

Hot - Humphries and rebounding. Luckily for the Raps the former Jazz first round pick showed up against his old mates. Kris did a fantastic job on the boards and his play really helped balance things out on the glass against a BIG Utah squad. The Raps actually managed to out-rebound this Utah team which is a pleasant surprise considering they are bigger than the Raps at virtually every position.

Seriously, you dealt me for a guy who plays in Russia?


Moving On: The Raps cannot dwell on the loss but lessons should be learned, in particular by Bosh and Ford. Coming up next is the Indiana Pacers who have started the season strong although they also will be coming off a loss.

It's important for the Raps to avoid any sort of losing skids early on. Not only do they need to keep Boston in their sights but they need to be in a strong position before they start heading out West later this year (check the x-mas schedule...it’s BRUTAL).

When you look around the league, save for Seattle and Minnesota, don’t you just get the feeling that there is great parity in the league right now? A team like Indiana, despite their poor record last season, is no pushover.

In the next 48 hours let's hope TJ Ford is introduced to his teammates.