3 In the Key – Toronto Raptors Game-Day Preview vs. Jazz

Share All sharing options for: 3 In the Key – Toronto Raptors Game-Day Preview vs. Jazz 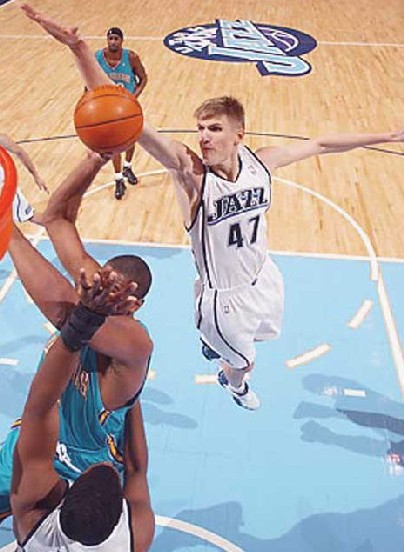 A great point was made by one of our readers yesterday concerning the gravity of the situation in Toronto.

"…we got GOOD problems - guys who WANT to play. Starbury just walked out on the Knicks. Think we got problems??"

So instead of dwelling on rotations, Garbajosa, and various other situations, let’s listen to some words from the great Sam Mitchell from yesterday’s shoot-around in regards to the Raptors starting small forward once again this evening, Jamario Moon.

"Throughout the history of time – ya’ll have ruined good young players with your expectations on what they should do and what they should be. And so if ya’ll really care about him like you claim you do, leave him alone, let him go!"

"Make sure you ask him (Moon) reasonable, easy questions, ask him where he’s from, ask him those types of questions!"

These were just a few of the many gems from Mitchell yesterday. But my personal favourite was him discussing which members of the media were at practice on Monday. Mitchell pointed out the three who were in attendance only to have one reporter speak up with:

To which Mitchell responded without missing a beat:

Jokes aside, Mitchell did confirm some of our suspicions here at the HQ. When discussing the new starting line-up he stated the he was "just trying to find the right roles for all our players."

He then went on to discuss Kapono’s move to the second unit:

It’s statements like these that make me feel a lot better about having Mitchell as our coach than say Lenny Wilkens. Sam saw that things weren’t working, and changed things up. And it sounds like he’s still going to be playing around with things a bit until he finds the mixture he likes.

So can we expect any more changes for tonight’s game?

We’ll probably know more by tip-off but the starting line-up in any event looks to be the same as in Toronto’s last game.

And what about the Jazz?

Well in our continuing series of blogger interviews we talk with Zach Harding from All Jazzed Up, a Utah Jazz blog. We asked him three questions so let’s get to it:

1) RaptorsHQ: AK47 looks to be playing back to his old All-Star self, what do you credit the
rejuvenation to?

Zach: It certainly does appear that Kirilenko is back to his old self filling up the stat sheet regularly so far this season. I thought that he would get back to having more success this year as last year was just one of those off-years that NBA players have every once in a while. His off-season complaints, I feel, were just his way of voicing his frustrations and although they did seem like they would prove to be a problem for the Jazz this season, I think it portrayed how much Kirilenko wanted to improve where he was at and not have another off-year like 2006-07. I would credit his rejuvenation to his willingness to keep working at it and play hard as well as Jerry Sloan and the Jazz organization and teammates also putting forth the effort to improve Kirilenko's situation and involve him as well as to improve the team as a whole. AK47 makes a big difference when he is playing well and is involved in the game and it has shown the first 8 games of the Jazz's 6-2 season start and current 4-game winning streak.

2) RaptorsHQ: The Jazz are currently the top scoring team in the league and have allowed their opponents to score the sixth most points, stats that seem strange coming from a Jerry
Sloan coached club. Can you give us some insight into why the offense seems improved yet the defense is struggling?

Zach: The explosiveness of the Jazz's offense this season, leading the league in points per game, has surprised me. Just as well, the amount of points Utah is allowing has also surprised me. However, I think that as the season progresses the Jazz will slow their opponents' tempo and scoring down most nights and will play more of that Jerry Sloan-esque defense they have been known for throughout the years. That has shown through in the last couple games already and I think their defense will continue to improve. On the offensive side though, I'm not so sure the Jazz will slow down a lot. I think they have the power and ability to keep up the high scoring, especially against inferior, low-level NBA teams. Example: Last 2 games against Memphis (118-94) and Sacramento (117-93).

3) RaptorsHQ: What do you think the biggest key to the game is for a Utah win?

Zach: The biggest key for a Jazz victory coming up in tomorrow's game at Toronto is to limit the performance of Chris Bosh. Therefore, the key is defense. I think the Jazz can score enough against the Raptors to win so as long as they play tough defense and hold Bosh to limited points and rebounds, they should come away with the win.

Good stuff from a Utah Jazz fan’s perspective which brings us to our three keys for a Raptors’ win this evening.

1) Start strong. Utah’s starting five is one of the best in the league. They can pass, they can score, they can defend, yes, they can do a bit of everything. They’re a very complimentary group and have been on an absolute tear this season. Therefore it’s imperative that the Raps get out and match Utah’s intensity from the get go. The starters need to play tough D, and they also need to try and dictate the pace of the game, something that will fall on the shoulders of TJ and CB4 early on.

2) Take advantage of the remodeled second unit. While Utah’s starting five has been impressive, its bench hasn’t been as good. If the Raptors get down early in this one Mitchell will have no problem turning to his bench mob to get the proverbial shovels going. This unit started to look better towards the end of the blow-out Saturday night and Jose and Andrea have always had good chemistry together. Il Mago in particular represents some major match-up issues for the Jazz and if he gets going, Jerry Sloan will have no choice but to go back to his starters…including a very similar player to Andrea in Okur.

3) Rebound the ball. Last time these teams met at the ACC Toronto managed to stay in the game for a bit. But eventually it turned into the Paul Millsap show as he and the Jazz destroyed Toronto on the boards allowing for way too many second-chance points. That can’t be the case again tonight and hopefully Sam Mitchell will have all hands on deck for glass cleaning.