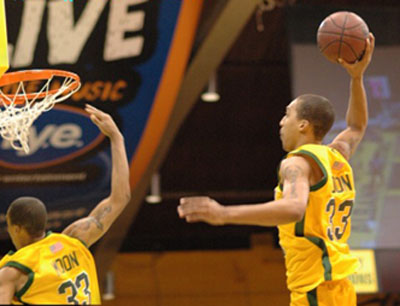 Lacing Them Up: The Raps are a better team than the 76ers but they have not been playing at a high level as of late. Coming into the game one of two things was going to happen. The Raps were either going to play down to their competition or use this game to really get back on track. Unfortunately it was the former and despite the 105-103 victory, there remain more questions than answers in Raptor land.

A Numbers Game: Clearly the number that jumps off the page is Jamario Moon’s 22 minutes played. As discussed it is clear that Mitchell has not established any sort of rotation and Moon found himself on the court early and often. His production in those 22 minutes was solid, but very surprising. While Moon logged big minutes, guys who had recently been first off the bench like Dixon and Hump barely saw the floor, if at all. Garbo also registered a DNP-CD. Mitchell clearly heeded our advice and rode the hot hands as Ford, Parker and Bosh (all played 32+ minutes) and when Moon started to produce Mitchell kept him in.

The question that comes of this though, is can this work long term. What is the end game here? Is it to play each guy every game to determine who is "up" and ride it out or is it to actually find a rotation and some consistency with the other players knowing they will only get into the game if certain things happen.

What’s evidently clear is that the "3" position remains the position with the most questions. Is Kapono going to be the guy or is Delfino? Moon? Graham? Garbo? A decision needs to be made at this point whether any of them are the long-term answer because if not I would argue that there would be value in trading some of this depth for a solution.

The Turning Point: This game really came down to the wire so there was not much of a turning point. Missed free-throws, four point plays and crunch time minutes by Jamario Moon....it was just a strange game all around, with no real defining moment. Maybe the real turning point in the game was when Louis Williams decided to do his best Allen Iverson impersonation in the fourth quarter scoring 20 of his 21 points in the final 12 minutes. Unexpected to say the least, but as the NBA so proudly tells us this is the league "Where Amazing Happens".

Who’s Hot - Try Andre Iguodala. This guy is a joy to watch and is putting up some serious numbers. His 26 points, 8 boards, 7 assists and 3 steals are numbers that very few in the league can put up. He attacks the rim with reckless abandon and is starting to hit the "jimmy" on a regular basis. He turned down some pretty serious dough in the off-season, and if he continues to play at this high level he will be glad he did.

Who’s Not - Andrea Bargnani. Andrea looked lost out there, very similar to times early in his rookie season. Now back on the bench Bargs has to be wondering what his role is. It is not unreasonable to expect him to have a very rocky sophomore season if Mitchell doesn’t define his role and allow him to get comfortable. His shot is very inconsistent right now and he is repeatedly being called for traveling. The big man’s confidence looks somewhat shaken which is hard to believe considering he shows so little emotion in the first place.

Who’s Hot - Calvin Booth. Ok, just kidding. Just can’t believe this guy is still in the league and wanted to get his name in here somehow.

Now on to Chicago to complete the back-to-back. Chicago, much like the Raps, has not started the season as expected. Much has been made of the Bulls slow start thus far. Is it early season lumps, the constant Kobe rumours, or is this team just not as good as forecast. At 1-4 the Bulls need to get things on the right track asap. Much like the Bucks team that the Raps faced just a few night ago, much of Chicago’s troubles stems from the cold shooting. Players like Ben Gordon, Kirk Hinrich, Andres Nocioni and even Ben Wallace (who doesn’t shoot from more than 5 feet away from the basket) are all shooting below 40%. In fact, as a team the Bulls are shooting an atrocious 0.390 from the floor.

On top of the poor shooting, the best low-post presence this team has is former number one pick Joe Smith. At 10.4 ppg Smith’s production in the paint is by far and away the best they have. Frankly the Bulls front court is the worst in the league. Their starting center, Ben Wallace is averaging 4.2 ppg, 4.8 rpg and .273 from the line. Think Paxon is rethinking that monster deal now? You can get these sorts of numbers from Ryan Hollins at 1% of the price. Knowing all of this the three keys seem clear.

Are the Bulls better off with this version of Ben Wallace? Probably shoots a better percentage from the line!

1. Force the Issue: It’s clear that the Bulls can’t rely on their front-court to carry the offensive load so forcing the guards to give up the ball will be key. Double teaming Luol Deng and Ben Gordon should be in the defensive game plan. The Raps need to force these guys into bad shots and get the ball out of their hands. Deny them the ball. If the Raps are not able to make it tough on Hinrich, Gordon and Deng you shouldn’t be surprised if the Bulls manage to get things back on track much like the Bucks, which resulted in a Raps L.

2. Stretch the D: This is one of the match-ups where chemistry between Bargs and Bosh would go a long way. If Bargs would pull Ben Wallace away from the hoop then Bosh would have tons of room to operate against Tyrus Thomas and Joe Smith. Both are match-ups that favour the Raps. With Rasho in the middle it will be tougher for Bosh to attack the basket. Nevertheless Bosh has to attack the hoop. If Kapono and Parker can keep the defense true then expect Bosh to see the free-throw line early and often.

3. Bench Play: The Bulls have an ok bench, but the Raps clearly have the advantage. Coming off a game and flight the night before, the starters and guys who played heavy minutes last night could get winded earlier than usual. The bench will be called upon to play significant minutes. How the bench responds will go a long way in determining the victor.

Could the Raps win two in a row on the road?