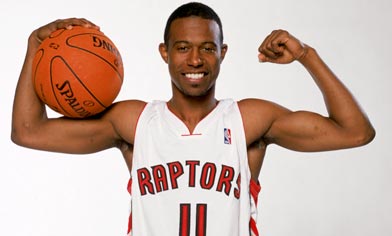 It had finally arrived. Walking into the ACC the energy was back. How much energy? Well it looks like Section 311 has been taken over by the TFC fans who are trying to find an outlet for their energy during the off-season. The fans, without a doubt are ready for the season ahead.

The thing we wanted to experience first hand prior to the jump was this years intro. In one of the most poorly kept secrets in quite a while, Kanye West’s remake of "Stronger" was indeed the intro beat. Well maybe "beat" is the wrong word. From where we were sitting the intro was too quiet, completely lacked any base, and the stadium seemed unsure how to react. If the plan is to use this song for the intro it has to be (1) loud, and (2) full of base. Until these things happen it’s not going to have the desired effect of pumping up the crowd. We still support the selection but we are hoping for more punch.

Outside of the intro watching the Raps and the 76ers warm-up it was hard not to feel extremely good about the Raps chances. The 76ers are really young, on the most part inexperienced, and a team searching for an identity. In the end it was the youth, inexperience and lack of identity that put the final nail in their coffin as the comeback fell short and the Raps came out victorious with a 106-97 win.

A few things jumped out on this evening. No more so then "12". Yes, that’s the number of Raps players who saw the floor tonight, and yes that matches the number of guys who dressed. Whether Coach Mitchell is still figuring out rotations or simply plans on giving each guy the chance to contribute is hard to tell. That being said it is hard to argue with the decision to play everyone as each guy contributed to varying degrees.

Now it’s only one game but a few things were quite obvious in how minutes were handed out and what each guy was asked to do. First off TJ Ford was given the most minutes and he took advantage putting on a display of nice moves, great passes and a plus/minus of +24. Not only did Ford put up his first double-double of the year but he also played pesky defense and really was a catalyst for the team tonight.

On the flip side you have Garbo whose highlight of the game would have been the monstrous cheer he received when he checked into the game. Outside of that....very little to report. He played only and handful of minutes and they were altogether nondescript. The question that has to be asked is whether Garbo really is healthy. Tonight all signs would point to no. Considering how much Mitchell relied on him last season one has to believe that there is still something not quite right.

If you watched the game tonight rebounding was a serious issue. The Raps were out rebounded by 12 and it was the team’s inability to keep the 76ers off the glass that allowed them to turn a 20 point deficient into a 1 point margin. Much of the rebounding deficit is attributed to Reggie Evans who was an absolute beast on the glass giving the Sixers multiple second chance opportunities. As we have mentioned all along rebounding is a stat that we will be watching closely all season and tonight we saw why being at least close in this category is so important.

Oddly enough the turning point was when Coach Mitchell realized that Bosh was ineffective and forcing the issue and had the guts to put his star on the bench. Let’s call a spade a spade. CB4 was having a tough day at the office. The refs were giving him no love and he simply was not getting the job done. The fact that Mitchell was confident enough to put his franchise player on the bench and still feel confident in winning a close ball game is all the evidence one would need in proving how deep this team is.

When Chris was benched and Mitchell re-inserted Bargs and Kap-One the offense ran much smoother and the Raps finally pulled away for good. CB4 would never be one to complain about being benched for being ineffective, in particular when the team wins. That is what makes him such a great leader for this team. He knows his minutes will come. More importantly this shows that Sam Mitchell did a hell of a coaching job and is willing to do whatever it takes to win.

Hot - How about Kyle Korver. This guy was on fire during the 76ers comeback and could not be left open. His shooting stoke is so smooth and his release fairly quick. Without his hot shooting this never would have been a game. Why the Sixers then went away from him I don’t quite understand. If you need threes and a high FT percentage he’d be a great fantasy pick-up.

Hot - Andrea Bargnani. Bargs had his first four point play of the season, and at a very opportune time. Andrea displayed that aggressive game he played during the pre-season and provided he can stay out of early foul trouble is going to be a hellish match-up for other bigs. He was hitting tough shots all night and was a key piece in ensuring the win. His rebounding numbers leave a little to be desired but that should come as he did spend some time on the blocks and closer to the hoop.

Game one of what looks to be a crazy NBA season is in the books. Suddenly it’s like all of the "experts" have forgotten what the Raps managed to do last season and many are unwilling to give the Raps their due. This was simply one 82 to prove that this young talented squad is on the NBA scene for the foreseeable future. Starting this season off hot will go a long way to proving the critics wrong. Well no better time than the present as the next two match-ups are against Atlantic division foes New Jersey and Boston. Should be a great weekend. Nothing better than starting with a win.