Something to Get Excited About

Share All sharing options for: Something to Get Excited About 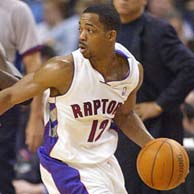 The regular season is right around the corner and I am feeling something that I have not felt for many years when it comes to our beloved Raptors and the upcoming season. What’s that feeling?

In past seasons I felt hope, curiosity and sometimes dread. Excitement heading into a season is something that has not been around this team in many years. There are few question marks heading into this season. The franchise and the fans know what they have and are cheering for. The Raps have a solid team and based on last years performance the sky is the limit.

Of course fans have been told many times to get excited about an upcoming season before. Remember the "new era" slogan that was plastered all around downtown when Rob Babcock came to town? Fans were told that things would be different and there was a reason to get excited. Wow, thing sure have changed since then.

Do you remember that 04-05 squad? Take a look at the roster:

What can you say other than "yikes". It was the season where Rafer was the biggest FA acquisition and Hoffa, before even playing a game, was one of the most criticized picks in Raptors history. It sure was a new era....and era to be forgotten.

Looking back at that squad (just three seasons ago) its amazing how bad it was. Of that team EIGHT guys are no longer in the league. That’s over 50% and that is an astonishing number. Of the six guys left in the league two hardly play. So that leaves a whopping four guys off that team that are quality NBA players. FOUR! You can’t even field a starting line-up.

Crazy part is that is only the tip of the ice-berg. Let’s take a look at a few of these players.

Jalen Rose: It’s scary how quickly Jalen’s play fell off after he was dealt to the Knicks. Actually it is downright terrifying. In the 04-05 season Jalen was averaging 18.5 ppg and leading an NBA franchise in scoring. Now? He can’t buy a minute in Phoenix after averaging right around 12 ppg form the Knicks. Has Rose’s play dropped off that quickly or were his stats simply propped up by the fact that he played for a very weak team. Probably a bit of both, but to know the "new era" Raps were being led by someone who should probably have hung them up two seasons ago should have been a little more concerning that it was.

Rafer Alston: Toronto’s big FA signing didn’t last long, and he is now being politely shown the door in Houston. You can’t tell me by drafting Aaron Brooks and signing Steve Francis and trading for Mike James that a clear message was not being sent. Of course Rafer has bigger issues that losing his starting job. In late August, Alston was charged with assault and accused of slashing a man’s throat. This was Alston’s second run in with the law as earlier this summer Alston was charged with misdemeanor assault and public intoxication. To say it’s been a rough season for the former Raps PG would be an understatement. He was signed to lead the Raps?

Milt Palacio: If this guy wasn’t boys with Vince Carter would his NBA career have lasted as long as it did? Milt hung around the league for a while but his NBA stint looks to have come to an end. This summer Milt signed with Partizan Belgrade in Serbia. It’s almost impossible to compare the PG situation in the 04-05 season to now. Rafer vs. TJ and Milt vs. Calderon. Think we have a bit of a good thing going right now? I don’t expect Calderon or Ford to be playing anywhere close to Serbia anytime soon unless the Raps move training camp there one year.

Omar Cook: I remember sitting with Franchise at the final game of the 04-05 season and Omar Cook got loads of PT. We looked at each other and both thought that maybe the Raps had something here. Talk about rose coloured glasses. Obviously after having watched Rafer and Milt man the PG spot for a full season we were desperate for something. Omar Cook is also playing in the far off reaches of Eastern Europe having signed with KK Crvena Zvezda (Red Star Belgrade). Man, we were desperate.

Loren Woods: Another NBA cast-off who now earns a pay check playing in Turkey for Efes Pilsen. If looking back you thought the PG situation was a mess the centre spot was clearly worse. Woods could never bulk-up and his string bean body accompanied with below average co-ordination soon came to overshadow any "up-side" he was perceived to have and Toronto was his last NBA stop. If you want to play in the NBA and you can’t contribute on a team with a 33-49 record who’s starting centre is the next guy on the list, it’s not shocking that no more NBA teams came knocking.

Rafael Araujo: The Brazilian Beast. What an poor nickname. Perhaps the Brazilian Bust would have been more appropriate. Maybe it’s not such a surprise that Hoffa didn’t make it in the NBA when he had Loren Woods showing him the ropes in his rookie season. To say the big guy had a tough time making the transition to the NBA game would be an understatement. It’s like going from Pro to All-Madden in Madden 08. You are destined to fail. The former lottery pick is now playing where most would have liked to have sent him packing when manning the 5 spot for the Raps....Russia. Araujo, having failed to impress Jerry Sloan (I know, shocking) has now signed with Spartak St. Petersburg. I am pretty sure SportsNet won’t be picking up any of these games.

So what does it all mean? Well to me it represents two things. First off, it’s amazing how quickly things can change in the NBA in particular when you have someone like the Legomaster in charge. There is only one guy left on the roster from three years ago! If a team has the right leadership and is forward thinking there are very few reasons, if any, why any team should not be able to turn things around in three years or less. It makes it unconscionable that teams like Atlanta, the Clippers and even the Twolves have not cleaned out their respective front offices due to their ongoing failures in putting a winning team on the court. If things are not working clean-house and start again. Worked here!

Second, as I alluded to at the beginning of this piece, it make you truly excited for the season. There’s no need for a slogan. No build-up necessary for this season. Toronto fans get excited about this team when there actually is something to get excited about. It’s been a long while but suddenly Raps tickets will be tough to get.

So let us know how many wins you think the Raps are due for. Get excited about the possibility of winning another Atlantic Division title or making a run deep into the play-offs. Have peace of mind in knowing that this team has loads of talent, is deep at every position and will be able to withstand injury better than most teams in the L. Or at the very least be excited by the fact that we have a team of NBA players.