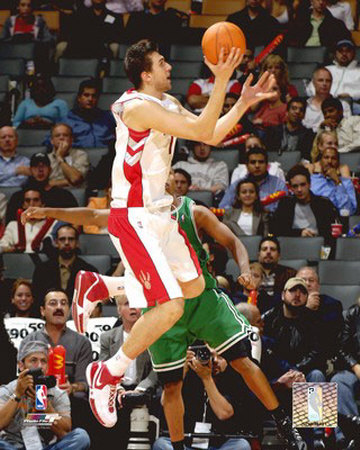 Because after having the Raptors seeded behind the Hawks and Bobcats in his pre-sesason team reports, Hollinger has updated things in his Conference Standings for the year and has the Raptors sitting in the final playoff spot.

Why the change? Well according to a note at the top of the article, the standings have been updated due to Sean May's impending knee surgery.

So let me get this straight.

Sean May, a bulking power forward for Charlotte who hasn't come close to living up to his Most Outstanding Player in the NCAA's a few years back, was what Hollinger was hanging his hat on in terms of the Bobcats leaping the Raptors for a playoff spot?

Moving on, we finally have some Raptors action to talk about.

Yep, seems like eons ago when we were talking about Bosh and co. and their struggles with the Nets in the playoffs.

And therefore it's great to report on Toronto's first preseason game of the season, unfortunately an 89 to 85 loss to the Boston Celtics, but nonetheless, some NBA action.

There's no box score from the game yet (it's still pretty early in Toronto on Sunday morning) but KG lead the new-look C's with 19 points, 17 rebounds and five steals.

The game was played in Italy and while Andrea Bargnani was treated to a hero's welcome, so were KG, Pierce, Allen and co. Bargnani finished with 13 points on four of six shooting and after the game, Sam Mitchell stated that he wished he had left Il Mago in for longer, despite picking up four fouls.

He also mentioned several times that Chris Bosh seemed rusty, something that is obviously a concern for Raps fans despite CB4's claim that his foot is healing well.

Up next for the Raps is Lottomatica Rome later today and once again, it will be interesting to see how Toronto plays and the reception Andrea Bargnani receives. There was concern of course that after his and the National team's disappointing performance at Euro2007, he might not be met only with cheers, but also some jeers.

That wasn't the case yesterday and Raptors' fans can only hope his 13 performance in limited minutes was a sign of things to come this season.