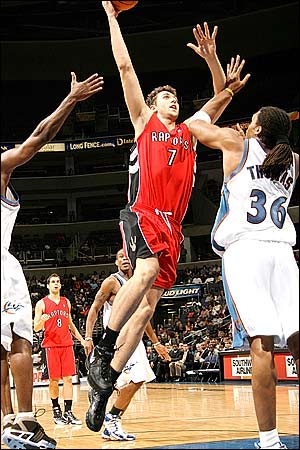 Those lyrics from the Clipse track "ultimate flow" echoed in my head as I watched Toronto absolutely destroy Washington last night. The Wizards seemed utterly demoralized and who can blame them? Toronto lead by 30 points for most of the game and like the lyrics to the song, whenever Washington tried to defend one aspect of the Raptors game, Toronto would turn around and kill them with another.

That’s how many steals the Raptors recorded last night. For a team that has had defensive issues the past two seasons, I’ve found that so far in the pre-season, especially the last three games, things look much better in that regard. I mean, what a team of ball-hawks? Carlos Delfino and TJ Ford in particular, who had seven steals between them, seemed to be everywhere on the court and I loved seeing the double-teaming of unsuspecting Washington post players.

Other key numbers from last night?

Finally, Toronto dominated Washington on the glass out-rebounding the Wiz 47 to 30. This was great to see as minus Etan Thomas, this Wizard team looks to be one of the worst rebounding clubs in the league. And Toronto took advantage.

Third game in a row without a turning point…hmmm. Maybe you could argue that the moment it was announced that Gilbert Arenas wasn’t playing was the moment things turned in the Raptors’ favour. However if you witnessed this juggernaut of an offense that was the Toronto Raptors last night, I’m not sure a team full of Agent Zeroes would have made a difference.

Hot – Let’s give a little love to TJ Ford. As many readers have noted on the site, TJ looks to be playing his best ball ever and I concur. He forced one shot last night with the shot clock winding down and the ball trapped in the corner but the rest came in the flow of the game and he took only five shots. He also would have had about 20 assists in the first half alone had Jason Kapono knocked down some of his open looks.

Hot – The Raptors. Wow. Yes, it’s only pre-season, yada yada yada. However ask yourself this - Would a full Wizards, or any other squad have affected the way Toronto got in the passing lanes, ball-hawked and moved the rock on offense? I doubt it. This team was just running on all cylinders. As I alluded to in the intro, the Wizards just had no answer for whatever the Raptors threw at them. It was like watching Thomas Hearns in the 80’s…a few short jabs represented by the Raptors going to the rim which would then open things up for the long bombs, in this analogy, Toronto’s dead-eye three-point shooting. Pick your poison and swallow hard.

And everyone got in on the action again – Rasho and Darrick Martin were the only two of the 16 Raptor players not to have scored and Delfino, Bargnani, Dixon, Kapono, Parker, Calderon and even Luke Jackson hit from long range.

Not hot – The Wizards with the exception of DeShawn Stevenson. I expected this to be a high-scoring affair on both sides but had it not been for Stevenson, who looked like he had switched bodies with Caron Butler prior to the tip-off, the Wizards would have been down by about 40 points at various times in the game. I know they missed Gilbert’s scoring, but yikes, defence like last night’s showcase aren’t going to get them back to the post-season in an improved East.

WILL IT BE DIXON WHO BECOMES THE ROSTER CASUALTY FOR THE RAPS?

Can't we just keep them all?

As much as I think Jamario Moon is the right choice in terms of who to keep for that last roster spot, you gotta feel for Luke Jackson, who did a few nice things last night and seems to be a great team-mate. In fact, it was pretty ironic that one of the game’s final plays, and highlights, was a Luke Jackson alley-oop pass to the player he may be replaced by in Moon.

And what’s all this Juan Dixon buy-out talk?

I haven’t thought that Dixon has been that bad in pre-season, in fact I’ve been impressed by his scoring ability and feel he could be a useful contributor at times this season. But with the current depth of the team, perhaps the Raptors would rather keep the youngsters Jackson and Moon and buy Dixon out to give him the opportunity to join another squad where he could receive more minutes.

As the Toronto Star’s Doug Smith points out however in today’s article:

Is Jamario Moon, a 27-year-old rookie with mesmerizing athletic skills but zero NBA experience, worth keeping? Will he ever develop into someone who can contribute in the regular season? Is he more worthy of a one-year contract because of his skills or because he would be a feel-good story for the franchise? If the answers are yes, and Colangelo can’t work a deal, Toronto will have to eat the salary of someone with a guaranteed deal and the fact Luke Jackson hasn’t played a significant minute the whole pre-season would have him at the top of the list.

Besides this obvious personnel decision that is looming, it’s an exciting point for Raptors’ fans:

-Chris Bosh has looked healthy the past few games,

-TJ Ford looks ready to take the next step in his development as an elite point guard,

-Andrea Bargnani had a great pre-season and improves with each game at his new position, especially in terms of aggressively attacking the rim and rebounding the ball,

-And even the Raptors’ off-season acquisitions Delfino and Kapono are rounding into shape. While Kapono has been streaky in the pre-season, I’m starting to understand what the Legomaster saw in his signing. Even if Kapono isn’t knocking them down, he’s such a threat that the fear of leaving him open should be enough to break double teams on Bosh and open things up for the other Raptors.

So let’s get this season rolling.

Enough of the pre-season with its constant "Stop Mom, STOP!" Canadian Tire commercials, solo Chuck Swirsky commentary and "Game-In-An-Hour’s." Bring on the "Hellllllllo’s" from Jack, starters playing major minutes and most of all, the Boston Celtics and New Jersey Nets. I can see why experts always refer to teams that have been together for a while as having an advantage and perhaps that’s the one thing that’s been most evident this pre-season from Toronto. Therefore I can’t wait to see them take this level of experience into battle against the aforementioned Celtics and Nets and any other team for that matter.

This team looks primed to do some damage in the East and I can’t wait to be along for the ride.