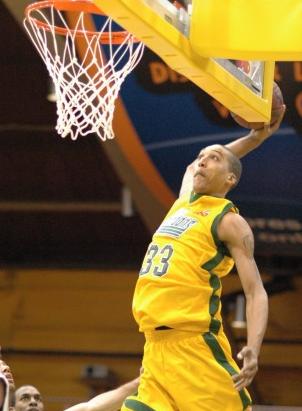 After the Spanish extravaganza Franchise and Howland decided to take in the pre-season exhibition game between the Bulls and Raps in the friendly confines of the ACC. Let’s say this right away….it’s nice to get some live NBA ball. Looking forward to seeing some of the grinders on both squads get some burn, we grabbed some scalped tickets for well below face. Seemed like we had gotten away with highway robbery. Well, someone got robbed….

It wasn’t even five minutes in when security came to our seats asking where we had gotten our tickets. It’s a long story (and thanks to the kind people at the ACC we got to stay and watch) but the moral of it is this….buy your tickets from the box office or off Stubhub. It’s worth paying the extra few dollars even if it is to watch Jackson, Baston, Moon, Martin and Dixon on the floor at the same time.

The final result was a 92-82 victory for our beloved Raps and the game was never even this close after the first quarter ended with the Raps up 28-19. So why the quick lead? First and foremost defence.

The Raps, in particular Jamario Moon, showed some solid hustle on the defensive end. The Raps managed 15 steals (compared to the Bulls 5) and if tipped balls were included in that category, the boys in white could have had 20+. The Raps did a great job getting into passing lanes, denying the entry pass and simply disrupting the Bulls offence. Whatever Sam has been talking about in practice it appears to have hit home.

If the Raps manage this sort of effort all season it can only bode well.

The team effort was not only evident on the defensive end. It was also evident on the glass. Seven of the players who saw the court managed 3+ rebounds and for a Raps squad that was greatly undersized compared to the Bulls, to only be out rebounded by two is a nice accomplishment. Of course this has to be taken with a grain of salt considering the guys who played and those who didn’t. Both teams were missing their best rebounders and minutes for the regulars were sporadic at best.

Perhaps the other stat that looks favourable for the Raps is the three point shooting percentage. Hitting at better than 40% from beyond the arc, the shooters looked to be in mid-season form. For a team that is going to rely (and sometimes rely too heavily) on the jump shot, seeing guys build their confidence in the pre-season is just what the doctor ordered.

There wasn’t much of a turning point in this one. The Bulls bench just isn’t as good as Toronto’s. The Raptors started off strong and never looked back. Anthony Parker, Jason Kapono, Jose Calderon and TJ Ford barely saw the court and Bosh and Garbs didn’t play at all. In fact, after watching tonight’s game, I’m left wondering just how deep this Bulls team really is. Tyrus Thomas had his moments when he could stay out of foul trouble, and at some point Joe Smith can probably be a solid contributor…but Aaron Gray? JamesOn Curry? Thabo Sefolosha? And what about Joakim Noah?? That’s one player I’m not taking a flyer on in my upcoming fantasy draft. Bargnani’s pump-fake before draining it in his face was the highlight of my pre-season.

Many of these players are expected to garner minutes come regular season time and unless this was an off night, the Raptors for the most part looked like they were just toying with them.

Hot - The fans. For a pre-season tilt with an undermanned Bulls squad, the place was pretty lively. We guessed at about 11 to 12,000 on hand but it felt like 16,000 thanks to a huge contigent of chanting Spanish fans.

Not hot - once again, Kap-One. He didn’t get a lot of minutes but I’m still worried about his ability to defend the 3. For now though, I’m willing to wait and see some real game action before throwing in the towel on this signing.

Not hot - no one else. This could have been a major rout, even if Deng had played more than 30 seconds, and everyone on the Dynos did a solid job. Most impressive however were Delfino the Funky Homosapien, who looks more confident with each game, Juan Dixon great shooting in limited minutes and Jamario Moon. I think I already started up the Moon fan club after seeing him at the Raps pre-draft camp this past summer but tonight he really put on a show of just what he’s capable of doing at both ends of the court. Check these stats: 10 points, a block, a steal, three assists, four rebounds (three offensive) two of two from three-point land and the most minutes played of anyone. Luke who?

Up next are two more Eastern Conference pre-season games to finish off this part of the season. First the Cavs and then the Wizards and both should continue to give Sam Mitchell some food for thought. From tonight’s game we got the feeling that the Raptors were simply running their practice through four quarters, especially in the fourth when the game got UGGGGLY.

However with each of these games, I think Mitchell gets a better and better idea of who can do what, not to mention who should get that coveted 15th spot on the roster.