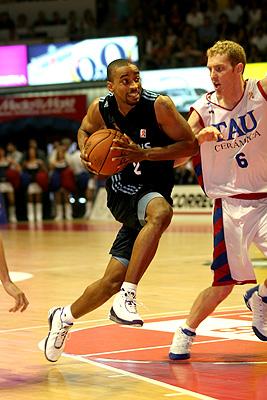 "We're searching...we have to find guys who'll get in there and do the tough things.

Hearing Raptors coach Sam Mitchell utter these words after last night’s 104 to 103 loss to Real Madrid has to be a bit disconcerting to Raptors fans.

Last year, one of the Raptors main weaknesses beside defensive lapses, was rebounding, particularly of the offensive variety, and well, last night’s effort on the glass was downright offensive indeed.

Toronto was out-rebounded by Real Madrid 52 to 38 and between the board work and Real Madrid’s 50 per cent shooting from beyond the arc, the Raptors just didn’t get the job done.

In the post-game press conference, I asked Mitchell why if the team was having trouble on the glass, he didn’t try Maceo Baston?

"We’ve got 16 guys and you can’t play them all. That’s what the pre-season is for, trying different guys and lineups to get something that works."

In fact, his answer scared me even more than if he had said something like "well, Maseo’s been hurt so we just didn’t have him available."

Because by saying that he and the staff are looking for a solution and didn’t even attempt to give Maceo some minutes, what does that say about their faith in Baston or how he’s played in practice? Was this signing a total waste of money?

And how about Toronto’s other signing this off-season, the bigger of the two, Jason Kapono? Through the first few games Kapono has looked decent at best and was borderline terrible last night. What worries me is that last night’s game is the sort he should excel in, not shoot three for 10 and foul out in! Kap-One is looking to be a large defensive liability and if he’s going to be detrimental to the Raptors at one end of the court, he’s gotta compensate by hitting his shots at the other.

As well, Anthony Parker looked a shadow of his former self last night and if Louis Bullock and Charles Smith are lighting him up like that, anyone else worried about facing Paul Pierce and Ray Allen?

Finally on the wings front, Carlos Delfino and Joey Graham weren’t much better than any of the other options but at least Joey looked like he was trying to take it to the rim. In fact, besides one big blown defensive assignment, Luke Jackson looked just as capable as any of Toronto’s other options.

And I guess this brings me to my main concern going into the season.

THIS TEAM REALLY NEEDS CHRIS BOSH AT 100 PER CENT.

That might seem like an obvious statement but watching the game last night up close, made me think about this team’s construction and just how integral to its success CB4 is.

In the transcript of Bryan Colangelo’s interview with the media, you’ll remember he talked about not upgrading on the rebounding and defensive ends this off-season, but getting the best shooters he could so that more shots made would mean less rebounds to corral. I know it’s only one game, and preseason at that, but without Bosh, the team with the exception of TJ Ford and occasionally Andrea Bargnani, relied purely on jump shots for their baskets.

Meanwhile, Real Madrid mixed it up and when their outside shots started hitting iron, they ran back-door cuts (something Toronto failed to defend all night) or got the ball down low to big men Hervelle, Sekulic and Papadopoulos who bullied their way to the cup. Without Bosh’s inside presence, the open looks just weren’t there and when Toronto did get open shots, they just couldn’t knock them down consistently leading to rebounds, which, yes, Real Madrid snapped up time and time again. Andrea Bargnani was the Dyno’s leading rebounder with seven, but his play last night at both ends was inconsistent and I still think he’s a good year away from being ready to take that next step as a player.

So you’ve gotta wonder, if Bosh misses too many games, how is Toronto going to be effective offensively? We just don’t have the athletes who can get to the rim unless Joey Graham finally figures things out or we see some more aggression out of Carlos Delfino and Anthony Parker. The whole plan this year was to spread the court and allow Bosh to go to work. If he was double-teamed, he’d have plenty of options outside to pass to.

That’s great if Bosh is playing, or if the outside players are knocking down shots. Last night, neither happened and as a result, the offense just kind of stood around. Had it not been for some excellent play by TJ Ford in the first half (who does look very prepared for this season as an aside), the Raptors wouldn’t have been able to get out to the lead they did. I also believe this is why TJ forces the issue at times. Toronto had a chance to steal the lead back in the game’s closing seconds but TJ tried to do too much resulting in a Real steal and foul shots at the other end to essentially seal the deal. But can you blame TJ when he and Andrea seemed to be the only ones last night who could create anything off the dribble?

And I also can’t quite understand why Juan Dixon only got four minutes of playing time considering the ineffectiveness of the Raptors’ other guards. Having a lot of depth is never a bad thing, but just like last season, I think it’s going to take some time for Sam Mitchell to figure out his rotation and I’m not expecting a gangbuster start to the season until they figure out to do with all these bodies.

But last night’s game wasn’t all negative. The Raptor, who was on hand, was a huge hit (he even signed some autographs for kids) and the team concluded what was an overall very successful Euro-tour. Most importantly perhaps is the bonding this team must have undergone while overseas and this should pay dividends during the tough times this upcoming season.

For me personally, having media access to yesterday’s games was an amazing experience and a big thank you goes out to the Raptors organization from all of us here at the HQ.

It’s only pre-season, and the Raptors can now start to test their mettle against some NBA teams back in North America after this Wednesday’s game against Zalgiris Kaunas at the ACC. This should give the team a better feel for some of the opposition they’ll be facing as a week from today kicks off what promises to be some solid pre-season tests in the form of Chicago, Cleveland and Washington respectively.

I for one will be looking forward to the confines of the ACC although after taking in last night’s match, I’m praying that Herbie wasn’t watching for public announcer ideas.

Otherwise instead of "uno, dos, tres!" we may be hearing TRIIIIIIIIIIIIIIIPLE! after each three-pointer made...