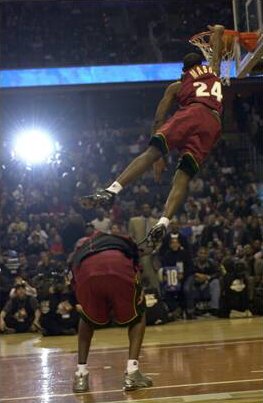 As I sat watching the Pacers dismantle the Raptors in the second half of last Saturday night’s tilt, something started to bug me.

Here was Chris Bosh playing his heart out as usual (albeit having an off-night shooting-wise,) Jose Calderon leading the team as best he could, Anthony Parker throwing down some vicious dunks and doing a great job as second-banana, and even Jorge Garbajosa and Rasho Nesterovic being effective for stretches...yet the team wasn’t getting anything else in terms of production at either end of the court from any other Raptor.

Even if TJ Ford and Andrea Bargnani had been healthy, and with Calderon giving Toronto some energy off the bench, would this have been enough to get the win?

I just didn’t see it.

The Pacers had far too many open shots and Toronto fired up too many jump-shots of their own instead of taking the ball to the rim...a malaise that seems to have plagued this team for almost as long as Toronto had gone without a true center.

No, it truly is games like the loss to Indiana that make you realize that there may be something missing to truly get this team over the hump.

Let’s look at some of the East’s top squads for comparison sake:

-The Wizards have three legit 20+ scorers in their starting lineup and have an underrated slasher in Deshawn Stevenson.

-The Pistons, thanks to the Chris Webber trade, now have up to five players (Billups, Wallace, Prince, Hamilton and Webber) who can go off for 20 points on any given night.

-The Bulls, while primarily a defence-first club, have the likes of Luol Deng, Andres Nocioni and Kirk Hinrich who can get to the 20 point mark and of course Ben Gordon, who at times gets 20 in his sleep.

Even some of the squads with slightly worse records have players who can score in buckets when needed including the renovated Pacers, and when healthy, the New Jersey Nets.

Right now, without solid contributions from the bench, I don’t feel that Toronto can match-up with this type of scoring which I worry about coming down the stretch. I’ve noticed in the past few games that Sam Mitchell has had to suffer through stretches of good defense mixed with poor offense because of the one-dimensional nature of some of his players.

For instance, in Toronto’s comeback win over New Orleans/OK City, Mitchell trotted out a lineup of Peterson, Bosh, Calderon, Parker and Garbajosa which won the game. However having Garbajosa out there, while great defensively perhaps, tends to hurt the team on the offensive end because he’s simply not a good shooter. Against the Hornets this didn’t matter as much because the rest of the Raptors were hitting their shots...versus Indiana though, it was another story. Toronto couldn’t get stops and Garbs finished three of nine from the field.

The other direction Mitchell can go of course is subbing Bargnani in for Garbajosa. However this creates the reciprocal situation, where perhaps Toronto’s scoring improves, but defensively, they are not nearly as effective, especially if the opponent is getting the bulk of its scoring from a post-player. Garbajosa for all of his shooting woes, did a magnificent job locking down the likes of Al Jefferson and obviously the hope is that both his offence and Bargnani’s defence, will improve as they continue to gain experience in the league.

But what about in the short term?

Right now Toronto is just not getting enough help from its bench, especially scoring-wise. Morris Peterson had a poor showing against Indiana but had been great in the previous three matches and I didn’t feel got enough playing time in the first half to be as effective in the second.

Joey Graham and Fred Jones are another story. Jones did get to the free-throw line five times hitting all of his attempts but still did not look comfortable on the court (he turned the ball over the first time he touched it) and seemed to be forcing the issue.

And Joey, well, his struggles have been well documented.

Look, I'm really hoping these two to start playing better and on a more consistent basis. For this team to be successful they really need to come into the game and be able to produce, even in limited minutes. But as of now that’s not happening so the question is, can and would Bryan Colangelo look to make some sort of deal before the trade deadline? After all, what do a good GM and a good stock trader have in common? – they know when to cut their losses...

Therefore, after scouring the current NBA landscape, here are a few trade proposals I've given some thought considering Toronto's need for a scorer who can get to the rim:

Rationale: While Mason is hardly the most accurate jump-shooter in the league, he is exactly the type of player who would thrive off the bench for Toronto. Mason is one of the best players per 48 minutes at getting to the free throw line and he can still throw it down with the best of them. In fact, this deal would see us exchanging one slam dunk champ for another. Mason is also solid defensively and would be a great asset to play either the 2 or 3 in the second unit alongside Calderon and Bargnani. Peterson as all fans know is a free-agent at year’s end. Whether he returns to Toronto or not is anyone’s guess at this point and to avoid losing him for "nothing," it does make sense to try and trade him prior to the February deadline. While I’d be sad to see Toronto deal Mo, it’s the only way financially to facilitate moving Fred Jones as well who just isn’t working out at this point. As for the other remaining pieces in the deal, I’ve always been a big Hilton Armstrong fan and think he too would be a great fit for Colangelo’s club. He’s a hard-worker, an improving offensive player, and a solid shot-blocker who rarely sees the court in New Orleans. Tucker has been playing in the D-League for the Raptors and would have to be sacrificed to make this deal work cap-wise.

So would New Orleans/OK City pull the trigger on such a deal? Mason is in the same situation as Peterson in terms of contract status and that may make them more apt to consider a swap. In addition, they would take on a similar player to Mason in Fred Jones, who might fit their system better and be a cheaper replacement for the over-the-cap Hornets.

Rationale: Seeing a reoccurring theme here? Once again, the Raptors look to go out and get someone who can break down a defence off the dribble and get to the rim. Not only that, but Wallace is one of the league’s best defenders and could play up to three positions for the Raptors and would seem to be a great fit chemistry-wise. The trade would rid Toronto of both Graham and Jones and mean that the 2-3 spot would be occupied by Peterson, Parker and now Wallace, a pretty solid triumvirate.

Would Charlotte actually make a non-draft transaction? That’s tough to say. Dealing Wallace makes sense if they have no intention of re-signing him as much like Peterson, Gerald will be an unrestricted free-agent at season’s end. And in addition the trade would give the Bobcats some depth and scoring, both of which the team sorely needs as they continue to build via the draft.

On the Toronto side of things, there are a few issues as well. Wallace plays with such disregard for his own body that he misses numerous games each year with injury. Would this be too much of a risk for Colangelo in terms of re-signing? If so, does it make sense to trade for someone only as a three-month rental in essence? No, not exactly. On top of this, would Wallace start? A starting five of Ford, Parker, Wallace, Bosh and Nesterovic would provide a well-balanced attack but would that leave the bench too short-staffed offensively once more? And would Wallace become a problem if Sam saw it fit to bring him off the bench? Finally, this trade wouldn’t address the Peterson situation and Toronto would then have two unrestricted free-agents to deal with. Packaging Peterson straight up for Wallace would be an alternative I suppose (works financially) but then Raptor fans are still stuck watching Joey Graham and Fred Jones flounder around.

So maybe all of these moves are too grandiose.

What about a smaller deal that flies under the radar but which would give the Raps that "missing piece" off the bench. Something like:

Rationale: Both Graham and Jones have been marred by inconsistency in their young NBA careers and perhaps a change of scenery would do each one some good. No, this doesn’t deal with Mo Pete or Fred Jones, but maybe the deal does give the Raptors a better insurance policy if Peterson takes his pocket-3 game somewhere else next season.

The other interesting thing about Jones is that if the Grizzlies were willing, he could be part of a bigger package. If Memphis decides to completely blow things up and trade Pau Gasol (as is rumoured every day now) perhaps they wouldn't mind shedding Mike Miller's contract either. A deal of Miller and the aformentioned Jones for Peterson and Fred Jones works financially and would make some sense for both of these clubs.

I guess that's the fun part of speculation. You just don't know what devious plans Bryan Colangelo and co. have in the works right now.

Maybe they've considered some of these same situations?

Maybe they're looking at teams like Golden State with their glut of swingmen to see if they can pry one free (Mickael Pietrus might look pretty good in a Raptors' jersey?)

Or maybe they have more patience than that and think that this team in its present composition, will find a way to not only get to the playoffs, but also cause some damage once there?

At this point I hope that's the case.

But from my vantage point something's gotta give in the swingman situation and until then, the Raptors are simply going to be short one piece.