Share All sharing options for: Media Watch for January 3, 2007/Game-Day Preview vs. Suns 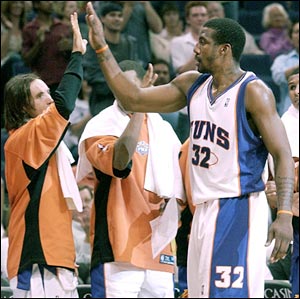 Yes, almost a month ago Chris Bosh suffered a bone bruise on his left knee and has missed Toronto’s last 12 games.

I don’t know about you, but it sure feels longer than that.

According to the Toronto Star, barring any sort of setback, Bosh will however end this streak by playing tonight against the Phoenix Suns. Bosh has taken part in full-contact drills and practice and seems good to go. Sam Mitchell even gushed that "he looked good out there" and while I think fans should be in "wait and see" mode until after tonight’s game, just having Bosh on the court is a sight for sore eyes considering that both TJ Ford and December’s rookie of the month and Mister Europa 2006, Jorge Garbajosa, might not play.

Ford seems to be about 50/50 however Garbajosa seems to be a longer shot. He’s still having pain simply moving around and it looks like Raptor fans might have to wait a little longer before having a full squad out there. And considering their opponent tonight, Toronto’s going to need all the help it can get.

Phoenix is coming off a last-second win over the defense-minded Chicago Bulls and sits tied for third spot in the league’s standings. They’re the top offensive club in the league scoring on average 110.7 points per game, shoot almost 40 per cent from beyond the arc and make almost 10 of these long range bombs each and every time out. All of this spells disaster for Toronto.

The Raptors have had issues with teams like the Suns and Bulls who can exploit teams with their athletic ability and guard penetration and that’s why I just can’t seem to be too up-beat about tonight’s match-up in terms of Toronto’s chances for a win.

Toronto is going to need to stop Steve Nash or at least limit his effectiveness. Whether the task will fall on Jose Calderon or TJ Ford at this point is anyone’s guess but in any event, if Toronto wants to keep this one close, someone’s going to have to get Nash off his game. Considering that "Kid Canada" is going for his third-straight MVP award, that’s easier said than done. As coach Sam Mitchell put it best "The problem with him is if you trap him, he makes the right decision," Mitchell said of the attempts to stop Nash on his bread-and-butter play. "If you go under (the screen), he can literally go 9 for 10 or 10 for 10."

On top of this, Amare Stoudemire has been playing like his old-self (24 points and 18 rebounds last night) and dominating on the interior, something that’s made Phoenix even more deadly so far this year. Now, if the Suns' outside gunners aren't hitting, Phoenix coach Mike D'Antoni can instruct his troops to pound the ball inside.

Yes, this is hardly the match-up Toronto wanted for Chris Bosh in his first game back from injury.

I really think Toronto’s best shot to win this game is to control the pace. Last time these teams met, Toronto forced the issue and put up 95 shots while only getting to the free-throw line on 23 occasions. The Raptors need to prevent Phoenix from getting out and running as much as possible, and not fall victim to the Suns "run-and-gun style;" Toronto just doesn’t have the shooters to play this way. For those of you who saw Phoenix snatch a victory from the jaws of defeat last night against the Bulls, Chicago, who played a great slow-down defensive style for the first three quarters, let Phoenix start to dictate the pace in the fourth quarter and it ended up costing them the game.

If Toronto can grind this one out, hit some outside shots (they only hit 40 per cent from the field last time these teams met,) get to the line and contain Steve Nash as much as possible, I think this will be their best shot at stealing one from a mighty Western Conference foe.