Share All sharing options for: Tip-In: Running on Empty 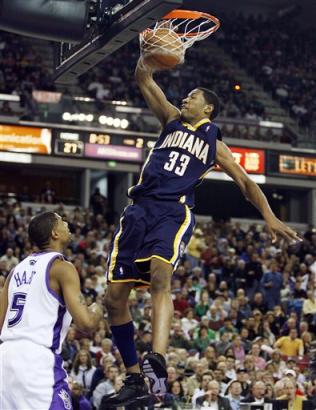 Coming off a successful home stand that left the Raptors at the .500 mark, the Toronto squad headed to the home of the Super Bowl-bound Indianapolis Colts to face the new look Indiana Pacers. Unfortunately for the Raps the Pacers did what the Colts will try and do down in Miami...win.

In a grind it out affair, the Pacers took the game away from the Raps in the second half and secured their 23 win of the season sending the low energy Raps back to all too familiar territory...one that includes a losing record. The moral of the story from the 102-84 loss was simply that the Raptors looked tired and weary.

Of course the term weary is usually used with "road," but the Raps cannot use a road swing as an excuse here. What they may be able to point to is the excruciatingly long trip from Toronto to Indianapolis that included a number of hours spend on the tarmac at the Pearson International Airport during some extremely poor weather. In fact when this was being discussed during the broadcast (as an aside TSN has the best HD for Raps games) I couldn’t help but wonder why this team is flying out of town so late? Midnight? 3 AM? Why not just leave early the next AM? Seems odd, but I digress.

The Raps were looking solid early in this match-up and led after one quarter. Rasho Nesterovic came out taking the game directly at Jermaine O’Neal, the Pacers were not shooting the ball well and the offense was running smoothly. What was very evident however, was that the Pacers were setting the "pace" and when the Raps only managed 40 points in the first half you knew they were in trouble.

Speaking of setting the pace I couldn’t help but think during the break that the Raps really needed to force the action. I didn’t want them to throw up shots 8 seconds into the shot clock, but the team needed to try and make the Pacers play a different style of ball. Well I got my wish, but I didn’t get the results I expected. In fact what happened next absolutely shocked me. The Raps did pick-up the tempo, but the Pacers met that tempo and pushed it to an even higher level. The action in the third quarter made the first half look like it was played in slow-motion and it was the Pacers who took advantage outscoring the Dinos 30-21.

I can’t help but think that the Pacers taking advantage of the up-tempo game was the direct result of two things:

The first is that the Raps were simply tired and they did not have the home court fans to boost their energy during the last 24 minutes as witnessed over the last week.

The second, is that this is not the same old Pacers team. Dunleavy, Murphy and even Diogu are multi-skilled players and when you put them with players like Daniels, Armstrong, and Danny Granger, the Pacers are a pretty athletic team. Coach Carlisle will never be mistaken for Mike D’Antoni, but he now has some very interesting pieces that can play a variety of different ways.

The frustrating part about this loss is that even with the low energy levels the Raps could have made a game of it...at least until Marquis Daniels nailed one from the next county with the shot clock running out.

Last night was the classic case of the Raps settling for too many jumpers and not getting the to the hoop. When one looks at the box score from last night you would never think that the Raps were hesitant to draw contact as they did manage to go to the line 28 times. The thing is they probably could have gotten there 10-15 more times. The three ball was just not there for the likes of Bargnani, Peterson and Garbo as evidenced by the 4-15 shooting yet every time a player went to rim the result was usually something positive. Just ask J.O. and Troy Murphy who are still wiping the sweat from Anthony Parker’s shorts off their brow (those dunks were ill.) Unfortunately the team was not committed to getting to the hoop like they needed to be and when the Pacers started hitting from long-range the game was long over.

Luckily for the Raps they are heading back to the friendly confines of the ACC. Of course the next home game won’t be like the next three as Agent Zero and "Hibachi" come into town and the Wiz always give the Raps a run for their money.

Hopefully TJ Ford will be healthy as Arenas is simply too much for Calderon and Martin.

- What is with Darrick Martin these days? The guy is shooting way too much. It’s not like he is a young guy trying to make a name for himself. He is really getting on my nerves. Good thing Mitchell is consistent and remains committed to riding the hot hand at the PG position.

- Could the Pacers end up with the best rebounding team in the league after this trade? J.O., Murphy, Foster, and Granger are all guys that can get you 10 boards a game.

- Gotta love Leo and his inability to hide his disgust for certain players. Maybe we should keep a running list. After last night it clearly includes Tinsley, Vince Carter, Gilbert Arenas, and unfortunately for Raps fans...Joey Graham.

- Do I even bother to mention the differences between Granger and Graham? Of course the rumour around the draft was that Granger asked the Raps not to draft him.

- Calderon has done a money job running the point during TJ’s absence.

- 22-23 is still pretty good considering the over-under on wins for this squad at the beginning of the season...some money to be made if you took the latter!