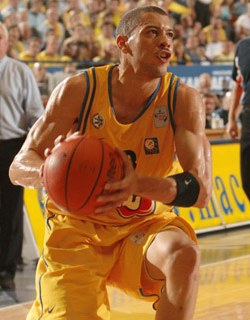 This was the outcome we were hoping for.

A 4 and 1 record over their five-game hom-stand means that the Raptors can cross off the first item on their "To Do" list - get to .500.

After their 96 to 90 victory from the Boston Celtics last night, the Raps then had to jump on a plane to head to Indiana tonight for one of their most important games of the season.

Wait, aren’t all of these games turning out to be the "most important game of the season?"

Well...I suppose so. It’s simply that the Raptors really rely on complete team play and an all-around effort to get their wins and therefore they can’t afford to take a night off...

Even with Andrea Bargnani back for Toronto, the team fell asleep in the third quarter and let what was at one point a 14 point lead evaporate until they found themselves behind 79-73.

But like their previous contests, Sam Mitchell got the right players on the court in crunch-time and the Dynos reeled off 19 straight points, their hottest scoring stretch of the season, and absolutely locked the Celtics up defensively. Jorge Garbajosa was a big part of this as he kept Al Jefferson, who had been dominating Toronto on the inside previously, in check.

Toronto also stopped settling for outside 3’s and jump shots and made a concerted effort to get the ball inside to Bosh. The result?

I’ve said before that this is a huge key for this club and once again last night they proved just how valuable this advantage is. Even though Toronto only shot 41.3 per cent from the field and were out-rebounded by 5, Toronto shot 29 free-throws as opposed to Boston’s measly 14 and this helped make the difference in the end.

The Raptors also got expert marksmanship from Anthony Parker who drained seven of nine three-point attempts and had a career-high 23 points. And Jose Calderon, who seems to live for the fourth quarter, was huge again in spurring his club on and finished with 10 points, eight assists, four rebounds and two steals.

Best of all, watching this game, even with Toronto down, I really never felt worried about them losing and found myself waiting to see them turn up the pressure at both ends of the court to secure the win. That’s something I don’t remember feeling in years.

And on top of this, for those who didn’t get a chance to see the link one of our readers posted yesterday, check out the following discussion on the Atlantic Division courtesy of ESPN.com. Can anyone remember the last time the Raptors were written about in even remotely as postive a manner? I mean, just to see the headline: "Fact of Fiction - the Toronto Raptors will hold on to their lead and win the Atlantic" made my day. Especially considering the usual lack of US coverage this team gets and how many "experts" viewed this team’s fortunes come the 2006-07 season.

If getting to .500 was the first item on Toronto’s "To Do" list, then making the playoffs is item 1 b. And beating the Pacers will go a long way in accomplishing this. If Toronto can’t hold their division, they’ll need to beat out teams like Milwaukee and Indiana (and maybe even Miami strangely enough) to ensure they can grab one of the East’s last spots. Therefore while Toronto should be beating up on teams like Boston, Charlotte and Atlanta, Indiana is one of the teams they absolutely need to beat to increase their playoff chances.

Indiana is coming off two big wins over Chicago and Miami and already seem to have better chemistry in the wake of their big trade with Golden State. Therefore the Raptors are going to need a complete four quarters effort to get this W. The Pacers will want to grind things out in a half-court setting and while Toronto can play in this manner, it will be imperative for the Raptors to dictate the offense, much like they did in their earlier encounter with the Pacers back in November, resulting in a win.

Key number one then for a second victory over Indiana? - The Raptors bench and as previously mentioned, a full team for an entire game (not just the last quarter) effort.

Besides Morris Peterson, the Raptors have gotten little help from their second unit recently. Yes, some of this is due to the fact that Jose Calderon is now starting due to the injury to TJ Ford, but Toronto is really going to need a solid game from Joey Graham and Andrea Bargnani to inject some more punch into the offense. Indiana can go quite deep with the likes of Jeff Foster, Marquis Daniels and now Ike Diogu (not to mention a reborn Darrell Armstrong) and Sam Mitchell is going to need a solid outing from his reserves to clinch the win. Bargnani still seemed to be suffering the after-effects of the flu last night but his ability to stretch Indiana’s defence is going to be key in helping out the likes of Parker and Peterson.

And speaking of Joey Graham, I’m thinking it’s time to see some Fred Jones again. He’ll be playing his former team and if that doesn’t get his motor running, I’m not sure what will. Toronto desperately needs some more offensive help (even with last night’s dominant fourth quarter, the Raps have struggled to score recently as they’re averaging 97.2 points in their past five games) and Jones might be just what the doctor ordered. It’s not like Graham’s doing anything recently that makes it impossible to play Jones over him after all...

The next key to this game I think is going to be from long range. The new starting lineup of the Pacers is packed with players who can drain from long-range (Granger, Dunleavy, Murphy and even Tinsley) and it’s going to be important for Toronto to stick with the shooters and force Indiana to put the ball on the floor. Conversely, I’d like to see Toronto get to the rim both to draw fouls, and also to open shots for their own long-range gunners.

Yep, you read that right. I really have found that Sam’s done an excellent job of playing match-ups these past five games and this will be one of his biggest tests. Rick Carlisle is one of the league’s top basketball minds so this game will not only be a test for the upstart Raps, but also for their coach. Will he play Garbajosa on O’Neal? How about Rasho? Will he have problems following Troy Murphy out to the 3-point line? This promises to be a close, low-scoring affair (Indiana is one of the league’s lowest scoring clubs) and one that could be decided by small things like match-up advantages and set plays near the end of the shot clock. If Sam Mitchell and co. can win these small battles tonight and the team can take care of the other keys, we could be looking at not just hitting .500, but getting over of it and on the way towards a certain end of season playoff appearance.