Share All sharing options for: Tip-In: Flick Goes the Switch 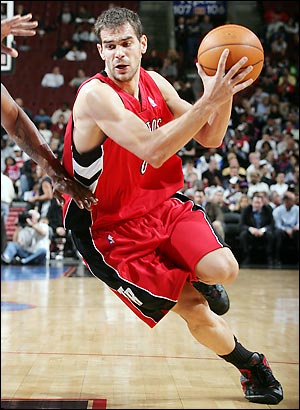 Who does this team think it is, the Detroit Pistons or the Miami Heat?

For the second straight game the Raptors decided to "flip the switch" and start playing some quality basketball before it was too late.

Toronto used a late 23 to four fourth quarter run after being down by as many as 15 to come back and steal a 90-88 victory from the Hornets.

I think before we get into this game’s details, an apology is in order.

No write-up can really do this game justice, it was just one you had to see to believe.

For starters, this match really looked like it was over way before the fourth quarter. The Raptors came out with very little energy, and besides Chris Bosh, Toronto just couldn’t get shots to fall.

And I didn’t mean to be prophetic in my preview yesterday, but the rebounding was indeed the key factor in last night’s game.
It got to the point in the first half where I was hoping that the Hornets’ shots that were off, would bounce up over the backboard, just so Toronto wouldn’t have to try and rebound the misses.

Because not only was New Orleans/OK City grabbing these offensive boards, they were also scoring off them. On top of this, the Hornets dictated the tempo, played great on the defensive end of the court, and players like Rasual Butler and Bobby Jackson were making shots from everywhere.

No, I really thought that this was "one of those games" for the Raptors. I mean when was the last time you saw Chris Bosh miss two free-throws in a row let alone four? I don’t want to keep alluding to the "Raptors of old" but I guarantee that every fan who saw this game was ready to call it a night early in the fourth quarter.

And that’s what was so amazing about this win.

This new version of the Raptors refused to hang their heads led by Chris Bosh (who finished with a game-high 35 points) and their fiery backup point guard, Jose Calderon, and even when the shots didn’t fall, they got back on defense and kept themselves in the game at that end of the court.

A ton of credit has to go to Sam Mitchell here too. Mitchell kept juggling the rotation until he got the right group of players out there near the game’s end to provide the perfect combination of offense, defence and pure heart to wrench the victory away from the Hornets. I can’t imagine Mitchell’s half-time speech to his troops but let’s just say that there may indeed be a bit less paint on the walls of Toronto’s dressing room. And finally in the fourth quarter, you could see that passion of Mitchell’s being transposed to his ball-club.

Take Morris Peterson and Anthony Parker for example.
After being invisible in the first half, these two finished the game with 17 rebounds between the two of them with most coming in the fourth quarter. Their veteran leadership whether it be in terms of knocking down key shots or playing stifling defence, played a huge part in getting this win.

Simply put, when the game was on the line, Bosh, Calderon, Garbajosa, Peterson and Parker wanted it more than New Orleans/OK City who reversed roles with Toronto and started settling for outside jump shots.

And once again, this game of course will do nothing to quash the "Jose should start" talk. He struggled a bit offensively, but was huge in the fourth both in terms of making stops (what a block on Bobby Jackson near the game’s end!) or driving to the basket with reckless abandon. I’m not going to say that TJ should come off the bench, but I do think that Mitchell needs to make sure that he uses Jose more in situations where Toronto simply isn’t bringing their A game intensity-wise.

Incidentally, I really think Toronto missed Andrea Bargnani last night, as he sat with the flu. Kris Humphries gave them some key minutes off the bench including three terrific offensive rebounds, but Bargnani’s scoring really changes the game and forces teams to open up on the likes of Parker and Peterson. As you saw last night, neither Mo or Anthony are apt at getting to the rim without an open lane. On top of this, Joey Graham was nowhere to be found and if I was Graham, I’d start looking over my shoulder again as Sam seems to be using Freddie Jones again.

Last night’s win puts Toronto only a game under .500 and back in top spot of the division as the Nets lost to the Warriors in dramatic fashion. Next up to get to that .500 plateau, the Celtics Friday night.

Let’s hope that Toronto can win its ninth game out of their last 12 (which would be one of the league’s top three records in that span) and not have to gut out another late game victory.

But as Chris Bosh so aptly put it last night "for once it feels to be good on the other side of such a game."