Share All sharing options for: Media Watch for January 24, 2007/Game-Day Preview vs. Hornets 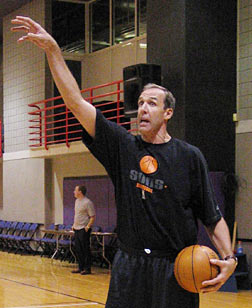 The New Orleans/OK City Hornets pay a visit to the ACC tonight looking to get back in the Western Conference playoff hunt.

The Raptors on the other hand, are looking to get within a game of .500 and challenge New Jersey for the top of their division.

Quite the discrepancy is it not?

Yes, the tale of the two conferences has been boiled to death, but then riddle me this:

-If New Orleans has been playing below expectations (even with their injuries) and Toronto has surpassed the expectations of the US media, how can Sports Illustrated give both teams the same grade?

As one of our readers pointed out yesterday, CNNSI.com has released their mid-season team grades in the NBA and to say that they’re a bit off would be like saying that Garbajosa needs to shoot less 3’s.

And this isn’t simply because of pro-Raptor bias.

I feel the team as a whole deserves a better grade for the job they’ve done this year, especially in terms of blending so many new players together and winning in Chris Bosh’s absence. Frankly, giving Toronto the same grade as the Knicks, is slap in the face to Bryan Colangelo and Raptor fans alike.

But then again Paul Forrester also gives the Lakers a B+ (a criminally low grade considering the scrubs surrounding Kobe Bryant and the injury to Lamar Odom) and their rivals the Clippers only a C- despite being the league’s most disappointing team. (Although maybe a recently signed Alvin Williams will help change this grade!)

And as our reader pointed out yesterday, it’s obvious that these grades were written without having seen Toronto play. Putting Rasho Nesterovic at the "back of the class?" We all know that the real winner of the "go sit in the corner" award here is Fred Jones and that since Rasho’s increased involvement, Toronto’s play has picked-up, especially on the defensive end of the court. Yes, this is yet another case of the US media not REALLY bothering to do their homework when it comes to the team north of border.

And enough with the Iavaroni talk already!

It drives me nuts that it’s a foregone conclusion that Sam’s done at season’s end. Stranger things have happened, just look at the T-Wolves bizarre firing of Dwayne Casey! ESPN.com ran a full Insider report yesterday on the top coaching candidates that aren’t currently employed in the NBA and at number three – yep, Iavaroni and with the requisite Raptors mention beside his name.

Have any of the sports media out there actually considered that Colangelo might NOT want to build another Phoenix? Maybe Phoenix was Colangelo Perfect Team Prototype Version 1.0 and he’s currently building Version 2.0 here in Toronto? Toronto resembles more of a San Antonio (quick, poor shooting point guard, dominant post player, Euro-influence etc) than any of the other elite squads and maybe that’s more of the model he’s going for!?

Which is why in another breath, let’s set this draft pick business straight too.

We do owe a pick to Charlotte thanks to the Lamond Murray deal but everything I’ve read says that the pick is Top 15 protected this year, NOT SIMPLY LOTTERY PROTECTED. Which actually makes a big difference for the Raps as for Charlotte to get our pick, Toronto would need to finish in the top 14 record-wise. Right now, the Raptors have the 16th best record, so while they’re teetering close to the edge, they would keep the pick if the season ended today. It would also be the best-case scenario as Toronto would still make the playoffs at the eighth spot. If anyone has further info on this let us know and in the meantime, we’ll be trying to get some confirmation on this from our friend’s at Draftexpress as the NBA’s rules are somewhat convoluted at times.

Therefore the bottom line for us is that we’d love for Toronto to make the playoffs and still get a shot at a player like Corey Brewer or Marcus Williams, two players who may fall into that range for the Raps.

(And as an aside, getting the eighth spot wouldn’t bother me at all. Besides the Bulls, and maybe a healthy Miami, is there any team that Toronto couldn’t stand a chance of beating in a series?)

On the home front, Toronto faces a Hornets squad tonight that while recently regained post-presence David West from injury, is coming off a tough loss to the 76ers last night.

This is yet another game that Toronto should be able to win and I think to do so, Toronto more than anything needs to control the glass. The Hornets struggle offensively but with "Bigs" like Tyson Chandler and West, New Orleans/OK City will attempt to get easy scores off of offensive rebounds.

David West will get his but it’s two other Hornets that Toronto needs to contain. Big games from Jannero Pargo and Desmond Mason could spell doom for Toronto as both players are extremely streaky and can put up points in a hurry. Jose Calderon will start again for the injured TJ Ford and will probably draw most of the assignment on the street-ball-skilled Pargo. It’s imperative that Jose not only do a good job of staying in front of Jannero, but also attack him in transition and get to the rim. As for Mason, Jorge Garbajosa may be matched up against him, and needs to prevent Desmond from getting to the rim and drawing fouls.

I wouldn’t be surprised to see Sam Mitchell using some zone defence tonight either as the Hornets are last in the league in field-goal percentage. If Toronto can force as many jump shots as possible from the travel-ridden Hornets, and get the ball out in transition against perhaps some road-weary legs, this bodes well for a Raptors W.

As a final note, we’ll be posting our Grades article later today in Spanish for our overseas readers. It will mark the debut of our "RaptorsHQ International" section, in which we’ll be attempting every so often to post our feature articles in various languages. Special thanks to Alejandra for translating the piece for us.

Also, once again our comments section has been acting up so many folks have been unable to post. If you’re getting the following message:

Sorry, you did not pass the CAPTCHA test.

We’re currently working around the clock to get these latest kinks worked-out though and should have things back to normal soon enough.