Share All sharing options for: Tip-In: Raps Take Bite Out of ‘Cats 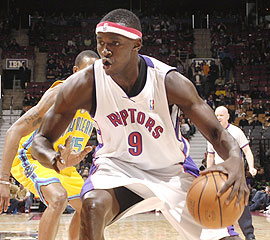 Pape Sow saw his first game-time action last night and was greeted by the ACC faithful (although the smallest crowd of the season considering the Raptors’ opponent) with open arms...not to mention his own GM, Bryan Colangelo, who made a special presentation to Sow in the locker-room after Toronto’s dominant win.

Oh yes, the game itself.

After a back and forth first-half, the Raptors used an impressive display of zone defence to limit Charlotte to only eight third quarter points en route to a 105-84 win.

Let the broken record spin but this was yet another game last night that Toronto had to win. Even when healthy the Raptors should be able to manhandle squads like Charlotte and here’s hoping that Toronto continues this dominance on Wednesday night.

Jose Calderon and Chris Bosh led the way for Toronto statistically and in another feel-good ending, every Raptor got some time and ended up scoring in this one which was over really before the five minute mark of the fourth quarter.

What most impressed me however in a game that bears very little discussion, was Toronto’s leadership from top to bottom.

At one point in the second quarter, the Raptors were lagging behind the Bobcats in terms of energy level and weren’t getting it done on the defensive end of the court. Seeing this, Chris Bosh who had been forced to sit with two fouls, popped back up off the bench looking for Mitchell to re-insert him. It was as if CB4 was saying "look, there’s no way we’re losing this game." He promptly picked up a third foul of course but this was a case of "actions speaking louder than words."

And besides Bosh, Jose Calderon provided a steady hand for the club, even early on when it was struggling. You just can’t say enough about Jose’s energy at both ends of the court (how about that block on Wallace??) and his ability to get everyone else involved. In fact Jose’s recent play is bound to start the "maybe TJ Ford should be coming off the bench" talk again.

Finally, Sam Mitchell also did a great job last night. Yes, the zone defence that was so effective against the Bobcats was put in place slightly by accident due to CB4’s foul trouble. But Mitchell stuck with it and you could really tell how hard Toronto has been working on this scheme in practice. The rotations were crisp, the double-teams down low came fast and hard and the Raptors did a great job of forcing turnovers and tough shots.

Speaking of turnovers, let’s end this Tip-In with some thoughts on Adam Morrison.

Morrison came into the league as a possible number one draft pick and was one of the greatest scorers the NCAA has ever seen. While he didn’t seem to have the long-term NBA potential of the likes of Rudy Gay and Tyrus Thomas, many experts believed that he was more ready to contribute right away in the NBA and that the Rookie of the Year race would come down to him and either Portland’s Brandon Roy, or Minnesota’s Randy Foye. However while both Foye and Roy have turned it on lately, Morrison has had a disappointing rookie season so far. He’s shooting only 37.7 per cent from the field and after seeing him last night, it’s obvious that he’s got a long ways to go before being a dominant scorer at this level. For one, his ball-handling skills are atrocious and he carries quite a bit. He also seems to have a real problem creating space, something that most scouts theorized prior to last summer’s draft.

Perhaps if Charlotte can continue adding players around him to help open up shots for the former Bulldog then Morrison can become more effective. But as of right now, he simply looks like a much scruffier version of Kyle Korver.

In fact one of the HQ’s long-time correspondents relayed this message to me this morning as he knew someone seated next to Charlotte’s bench last night.

Apparently Morrison was asked why he cried on the court after the loss to UCLA...

Morrison didn’t respond and was hardly pleased with the question.

Raymond Felton on the other hand, started cracking up...