Tip-In: One Step Behind

Share All sharing options for: Tip-In: One Step Behind 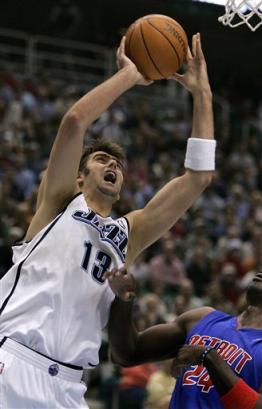 "We took a step back today." "We need to look at the film and learn from our mistakes, continue to play our style of defense because we didn't do such a good job today and we just have to take this one and try to get the rest of the three games we have on this homestand."

Thank you Chris Bosh...and what more can you say?


The Raps fell short last night in a 102-94 loss to the Utah Jazz in a game that was close up until its final minute and a half and which the Raps I'm sure would love to take a mulligan on.


Shooting 45.6 per cent, Toronto missed a number of open layups, foul shots (17-23) and long-range bombs, and were unable to stop Utah's penetration when it mattered most allowing the Jazz to score 48 points in the paint. They also played sloppily on the defensive end until it was too little too late and let a key win slip through their fingers. And that was also paramount because with New Jersey eeking out a win over New York, Toronto mpw finds itself relegated to eighth in the Eastern Conference as of this morning. We had discussed the main issues for the Raps in trying to win this game and how this would be a good test for Toronto and sure enough, for those who watched the game, this was indeed a fight to the finish.

Unfortunately, Toronto just couldn't seem to get over the hump whether it be Mo Pete shots that just rimmed out, or CB4 attempts that fell short.Sure, the Raptors, in particular TJ Ford, missed some open looks, but in the end, they couldn't stop the Jazz's front-court who racked up an obscene 70 of Utah's 102 points. Utah's guards also penetrated pretty much at will as well and found their front-court mates for numerous dunks and easy put-back attempts and this was the difference in the game.

Chris Bosh led the Raps with 29 points and 11 rebounds and kept Toronto in this game until the fourth quarter when the Raps mounted their best comeback attempt before falling short.

But had this game been extended for another 10 minutes?

Well...I'm going to say that might have been a different story as the Raptors seemed to execute better offensively as the game wore on. Defensively there were still too many gaffs, but this simply showed how well-regimented Utah's offence was in my opinion.

Jose Calderon once again got all the crunch-time minutes and was superb in relief of an underwhelming TJ Ford as Jose scored 16 points and dished out five assists. More importantly however, the lineup of Calderon, Bosh, Bargnani, Peterson and Parker gave Utah a real run for their money in the last eight minutes of the game and although came up short, I expect to see lots of this lineup for the remainder of the season.


Right now however, Utah is simply a better team and you're not going to see this HQ correspondent turning "Cookie Monster Blue" over the loss

The Raptors gave it all for, yet still came up short and as discussed, perhaps with a few more lucky bounces, might have stolen one at home. I'd even go a step further to say that Mitchell should have relegated Ford to the bench half-way through the third quarter (that's the luxury of having two excellent decion makers at the 1) to really see how close Toronto would have gotten.

More importantly as Chris Bosh touched on in the opening quote, Toronto needs to continue to learn from its mistakes and take advantage of the next three completely winnable home games.

For this is the stretch that will really show Raptor fans what this team is made of...from positions one through 15.