Share All sharing options for: Game-Day Preview - Raptors vs. Jazz 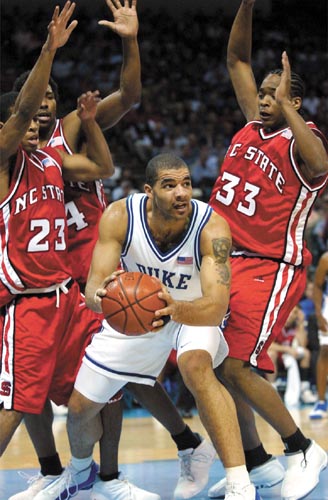 Hands up to all who thought that Jerry Sloan’s Utah Jazz, yes the same Sloan who’s presided over Utah with an iron fist for what seems like an eternity, would be the sixth highest scoring team in the league?

You at the back, step forward! Oh, you weren’t actually raising your hand? You were just stretching?

Well, that makes no one then.

Even in the Stockton-Malone-Hornacek era, Utah was always known for its rugged defensive style of play and were hardly an offensive juggernaut. The Jazz won games using perfect execution and with a group of some of the fiercest competitors that the NBA has ever seen.

So it’s quite strange then to see that the Jazz are scoring 101.6 points per game and yet giving up almost the same (99.4) on average. And even more incredible is that Utah is allowing its opponents to shoot over 33 free-throws a game, worst in the league!

However the high-octane offense led by the likes of Carlos Boozer, Mehmet Okur and Deron Williams has been quite successful as the Jazz sit atop the Northwest Division with a 25 and 14 record. Utah has a very deep squad which can play both full-court and half-court styles and seem to be the perfect test for a Raptors’ squad brimming with confidence.

Toronto has actually been a better defensive team than Utah this season (woah, can’t believe I just typed that!!)especially in the past few games and the Raptors are going to need to bring another excellent effort against one of the most multi-faceted offensive clubs in the league. Utah can score off the dribble using the likes of Williams and Ronnie Brewer, can take the ball inside thanks to Carlos Boozer and Paul Millsap, and of course drain it from deep using the likes of Mehmet Okur and Andrei Kirilenko.

Oh...and did I mention they have Rafael Araujo?

The Raptors therefore need to limit Utah’s outside looks from downtown and make them work for every open shot.

Most importantly however, to win this game Toronto needs to do a much better job on the interior than they did the last time these teams met back in November. The Raptors were out-rebounded 51 to 36 and Millsap ate Toronto’s front-court for supper posting 20 points and 8 rebounds in less than 30 minutes.

However things should be different this time around. The Raptors were still starting Fred Jones in their last match with the Jazz, Rasho Nesterovic played but five minutes and Joey Graham was collecting another DNP. If Toronto can hold their own on the interior, this will give them a chance to keep things close even if their offence struggles.

The Jazz have actually cooled off as of late and are only three and five in January. You could therefore argue that the Raptors are meeting this Jazz team at a perfect time.

But timing aside, for their offence to really be effective I’m going to be looking at two players to help get this win – Andrea Bargnani and Joey Graham. If Bargnani is stroking it from outside, this should open lanes up for the likes of Peterson and Graham and Joey should be able to have his way with a Utah team that lacks any athletic presence like his.