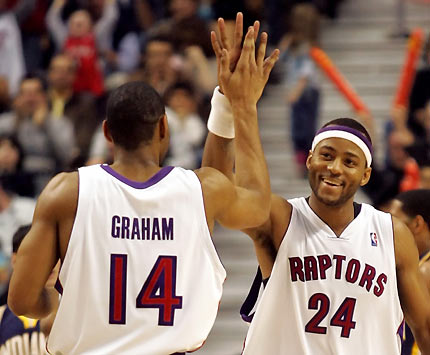 What a way to start the home stand.

Actually let me rephrase that - What a way to finish the first game of the home stand.

-The return of Garbajosa?

-Graham bouncing back DURING a game rather than two games later?

-Sam Mitchell’s use of the PG’s?

-Or how about Mo Pete playing one of his best games of the year?

One thing is for certain, it’s hard not to get excited.

I won’t expand on these things until I get one thing off my chest...all of the refs on the floor tonight did a terrible job. Just putrid. It’s nice when refs are consistent in their calls and let players know what is a foul and what is not. It’s even better when the refs allow a bit of a flow to develop. What sucks (yes a very scientific term I know) is when calls are repeatedly blown, players have no idea how a game is going to be called, and the refs make the game so painful to experience that I would rather watch seasons one through three of "I Dream of Jeannie" on Beta. I am sure being an NBA ref is not an easy job, and I would want no part of it, but come on, at least make it look like you belong out there...and I don’t just mean wearing the uniforms. A bad day at the office for Mr. Brown, Mr. Wall and Mr. Washington and as a result a tough game to watch for most of the first 24 minutes.

But enough about the negatives. Fans saw something tonight that we have all been waiting for: Garbajosa getting fired-up. There may not be another player in the league who shows so little emotion on the floor. A bad call? He blinks. A big shot? He blinks. Just sandwiched between Eddie Curry and Mike Sweetney? He gasps for air...and blinks. This guy is the definition of even keel...at least until tonight.

It’s no mystery that Garbo has not been playing to the same level as he was prior to the calf injury. In the past few games his shot has been off, and he has not been nearly as effective. Tonight after starting the game cold Porno finally hit one...and was PUMPED. Tearing the jersey from his body and yelling in frustration, this guy wanted the gorilla off his back, and from that point on he kicked the gorilla’s ass. Garbo had a really nice bounce back game, hit some threes and was a solid contributor to the Raps win. Hopefully this gets him back on track. But even if he struggles for the next few games it is still nice to know that behind that frozen stare is a man who cares about winning and is passionate about doing so.

Garbo was not the only Spaniard who played well. Calderon was instrumental in the huge fourth quarter by the Raps. Ford was not playing particularly well as evidenced by his 3-11 shooting and 5 turnovers in 23 minutes, and Mitchell looked to Calderon to right the ship. Ahhh the luxury of a having a solid back-up point guard. Calderon was more than efficient on the floor, consistently went to the hoop, and more importantly dished out nine assists while only turning the ball over once. I give full credit to Sam Mitchell on this night as I fully expected, although had no desire, to see TJ Ford on the court again at some point in the fourth. Much to my surprise Mitchell went with the guy who was playing the best and didn’t mess with what was working. It’s not like Ford didn’t want back in though! With only two minutes left in the game Mitchell pointed to the bench, Ford popped up, tore off the warm-ups and looked to enter the game. Mitchell looked at him like he had three heads and tossed Martin in for the final ticks.

One of the biggest surprises of the night for me however, was Joey G. There is no player on this team that frustrates me more, yet I want to see succeed so badly. Tonight was different than usual though. Originally it looked like it was going to be another classic disappearing act by number 14. He got into early foul trouble (foul four was a terrible call) and Mitchell was upset. There was no sign of him doing those things that made him successful against the 76ers and I fully expected him to be riding the pine for the rest of the game. Mitchell rode him out (partially due to Parker being in foul trouble as well) and Joey responded with 8 points in the Q and some good defense on Artest. It’s not so much that the 10 points it noteworthy as it is that Joey managed to pull things together after a terrible start. Has that ever actually happened with this guy? To me this is just more evidence that Joey could become the player all the fans want him to become. I know some readers are ready to throw him into a Glad Kitchen Catcher and toss him down the garbage shute but just be patient. Trust me on this one.

But even if you don’t believe me, hear this. The most exciting part of the evening was getting the sense that this team feels really good about themselves. They believe. They want to win, they want to win badly and they believe they can. There is an opportunity this season given the division they are in and the enormous number of injuries in the Eastern Conference to make it into the "second" season. These players are looking to grab this opportunity. You can just tell that they want it. When was the last time Raps fans got any sort of good vibe from this team? As discussed in the intro blurb, CB4 relayed this exact message to the fans loud and clear demanding the fans get pumped after a foul call.

Call me an optimist, and maybe I just enjoyed the fourth Q a little too much, but if the Dinos manage a really solid home stand then I believe this team's confidence could reach levels not known in the ACC for many years. It’s possible that this home stand could be the launching point for a very exciting second half of the season and we may just see this team win games it should but also steal a few that it shouldn’t.