Share All sharing options for: Game-Day Preview - Raptors vs. Kings 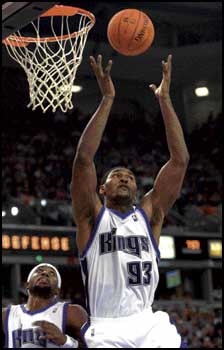 The Kings are a team I can’t figure out.

During the pre-season I had the following eight teams to make the Western Conference playoffs:

Obviously New Orleans has been ravaged by injuries and has fallen out of the race. And the Clippers have severely underachieved while the Lakers and T-Wolves have been pleasant surprises.

But what about the Kings?

Sure Ron Artest was undoubtedly a wild card but with a starting lineup of Mike Bibby, Artest, most improved player candidate Kevin Martin, Shareef Abdur-Rahim/Kenny Thomas and Brad Miller, it’s incredible that this team has only won 14 games...even residing in the Western Conference.

The other interesting thing is that the Kings had always been one of the league’s top offensive clubs and by bringing in defensive guru Eric Musselman to coach the team, many, including myself, thought that this would enable Sacramento to compete with the West’s other premier defensive clubs.

However this has been anything but the case.

So is the key for Toronto tonight to stop the Kings from scoring? Or is it for the Raptors to score as many points as they can on one of the league’s worst defences?

I’m going to go with the former.

Toronto is sitting around the middle of the pack in most defensive categories, a vast improvement over last year, and if Toronto wants to win this evening’s contest over such a potent offense, it’s going to need to get stops. In particular, someone’s going to need to stop Kevin Martin.

Martin has emerged as the most dangerous scorer on the Kings and I’m expecting heavy doses of both Anthony Parker and Morris Peterson on the former Western Carolina guard. Much like Reggie Miller, Martin uses screens to get open and has one of the quickest releases in the league. If Toronto can put the clamps on Martin, it will force both Artest and Bibby to shoulder more of the scoring load, something they’ve struggled with this season shooting 41 and 38 per cent from the field respectively.

Sacramento plays an up-tempo style and likes to get out on the break. While Toronto can play in that manner, it will be key for the Raps to control the glass against one of the league’s weaker rebounding clubs to prevent easy transition baskets by the Kings. The Kings don’t have much for a bench and Toronto should be able to take advantage in this respect as well.

Finally, I’m really looking forward to seeing how the Raptors execute tonight. In the past five games the team really has looked cohesive and while struggled at times against Boston and Milwaukee, you’re really starting to get the feeling that players are learning their roles. The starters are set and Mitchell goes to the bench depending on what he feels he needs.

-Not enough offence from the starters? Sound the alarm clock for Il Mago.

-And of course if Toronto needs a boost defensively and some experience on the court, Morris Peterson is always ready to roll.

(Yes, that leaves Fred Jones and Kris Humphries out of the rotation but until I start seeing a reason why either should be seeing the court, and I haven’t lately, then I’m quite fine with the way Sam is doling out the minutes.)

Speaking of Graham, he was a guest on the Score’s "To the Point" last night and admitted that last year he struggled with the pace of the NBA game. While most fans could see that this was the case, it was interesting to hear Graham speak about how the game is "starting to slow down for him." Of course we’d all like it to slow down a bit more so Joey could consistently give us box scores like he did on Monday’s game.

I actually think Graham is the real wild card on this club. You know what Chris Bosh is going to give you every night. In fact, recently you could say the same for the likes of Jose Calderon, TJ Ford, Rasho Nesterovic and Anthony Parker. However none of those players possesses Graham’s combination of size, strength and athleticism and Toronto desperately needs this to win games. Graham could end up being the deciding factor in many a game’s outcome simply based on his ability to get to the free throw line where he’s an excellent shooter.

If Toronto starts getting that consistent double-figure scoring off the bench from Graham, with four or five rebounds and trips to the free-throw line thrown in, this goes a long way for Toronto.

It also gives Bryan Colangelo an idea of what he’s working with come trade deadline.