Tip-In: On The Bound

Share All sharing options for: Tip-In: On The Bound 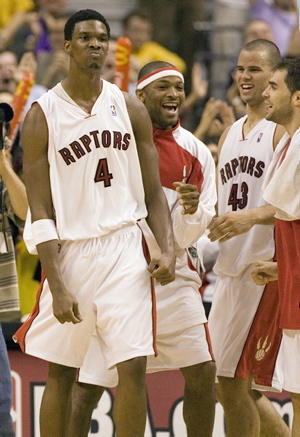 Yes, before the fourth quarter even got started, this is who Philadelphia subbed-in.

Talk about waving the white flag.

After a rough start to the game, the Raptors used a crushing 32 to 14 third quarter to blow the hinges off this game and they never looked back cruising to a 104-86 win.

For those who got to see this afternoon’s game on MLK day in the US, you couldn’t have been more pleased. The Raptors truly were "on the bound" with a perfect bounce-back from yesterday’s loss and this win was in fact, the best case scenario for the club:

-The Raptors put on a dominant performance against a clearly inferior team, and they did it less than 24 hours after yesterday’s gut-wrenching loss the Mavericks.

-They got great leadership from their key players who put the team on their collective backs after a shaky start, the exact thing that signals such a growth and progression for this club. Bosh led the Raps with 27 points, TJ Ford had a double-double with 13 points and 10 assists, Anthony Parker was all over the court as usual with 17 points, six rebounds, four rebounds, a steal and a block and look who showed up right on schedule...Joey Graham, with his signature 18 points and five rebounds.

-Because of the insurmountable lead Toronto had built by the start of the fourth quarter, Sam Mitchell was able to rest his troups after such a dog-fight with Dallas. Fred Jones, Kris Humphries and Darrick Martin all saw action near the game’s end and Mitchell was also able to experiment with his lineup a bit using Jose Calderon with either TJ Ford or Darrick Martin.

-Even if New Jersey wins tonight (the Knicks already did this afternoon) the win keeps Toronto ahead of their Atlantic division rivals and in good shape heading back home to face the Sacramento Kings Wednesday night.

-And maybe best of all, the Raptors didn’t let up through an entire 48 minutes (although Rodney Carney did throw down a few nice jams near the game’s end) and continued to display their newfound discovery of something called DEFENCE. The Raps out-rebounded the 76ers and while the boxscore will show that Philly shot over 47 per cent from the field, that stat is misleading as prior to putting in their extended bench, Toronto had Philly shooting closer to 41. You just can’t say enough about Anthony Parker in this realm as he prevented Andre Iguodala from getting to the rim with ease and he absolutely locked-down Kyle Korver allowing the former Creighton sharp-shooter only two points in 32 minutes of play.

Even Joey Graham got in on the action with some good hustle plays and key rebounds whereby continuing his mystification of Raptor fans. Graham used his size and athleticism to get to the free-throw line a team-leading 11 times hitting on 10 of them! Of course the remark was made again (and I’d wish they’d stop as it’s so played by now) that Andre Iguodala should have been a Raptor and maybe if Joey can start giving us games like this more than once every two weeks, the media will stop addressing the Hoffa debacle once and for all.