Share All sharing options for: Tip-In: A Win is a Win? 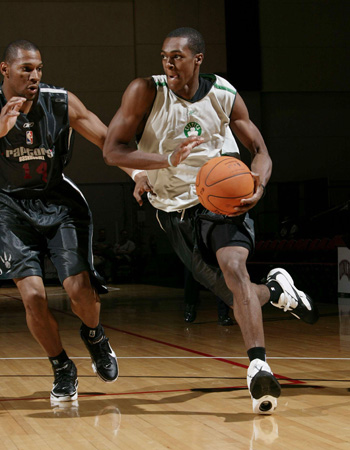 With a 95-86 victory over the Boston Celtics, the Raps moved back into first place in the Atlantic division, and are now within three games of .500 at 17 and 20.

Well...what can you say about last night's win? The Raptors won a game they should have and are now prepped to play a Dallas Mavericks squad on Sunday who has lost only once in their past 17 contests...

Hmmmm...how do I put this diplomatically?

I fully expect Toronto to get clocked like Flavor Flav in their next match against the Mavs.

If a lineup that consists of Rajon Rondo, Michael Olowokandi, Leon Powe, Allan Ray and Gerald Green outplays and out-rebounds you, wait till you play one consisting of Jason Terry, Dirk Nowitzki, Eric Dampier, Devin Harris and Josh Howard.

Yes, the Raptors got out of Boston with a win, but it was no easy feat. The undermanned Celtics got great bench play and rebounding to keep this one a lot closer than it ever should have been and had it not been for the C’s ridiculous amount of turnovers (21) and poor foul shooting (66.7 per cent) this may indeed have ended up in a loss for Toronto.

And the icing on the cake was that three of our favourite players from last year's draft almost did Toronto in. Rajon Rondo (as most know, a personal fave of mine) was spectacular for the Celtics with 23 points, five assists and four steals and two of our second round faves, Allan Ray and Leon Powe, had key contributions for Boston.

In fact, this marked the second straight game where Toronto played down to the quality of their opponent and the team seemed to sleep-walk through the first three quarters until an Andrea Bargnani three-pointer awoke them from their slumber just before the start of the fourth quarter. Chris Bosh was the star of the game for Toronto with 27 points, eight rebounds and three blocks (not to mention a ridiculous flush on the Kandiman’s head) and TJ Ford and Anthony Parker added 19 and 18 respectively.

The rest of the team was spotty at best and even though Jose Calderon and the aforementioned Bargnani hit some key buckets down the stretch, shooting 45.1 per cent from the field considering the quality of their opponent was disheartening to say the least. And allowing the Celtics to come up with all the hustle plays for most of the games (17 points off of 13 Raptor turnovers) really gave coach Sam Mitchell reason to tear the paint off the locker room walls at halftime.

But none of these stats tell the real story of what was ultimately the most frustrating game of the season from a fan’s view.

The Raptors showed little interest in getting a win and it wasn’t until near the game’s end that they decided to seize control for good. At times the Raptors couldn’t seem to buy a basket and both Howland and I found ourselves yelling for wholesale substitutions to buoy the team’s offence.

But the changes never came as Fred Jones had himself another DNPCD and even Mo Pete, he of many trade rumours, only saw 10 minutes of action.

Now, I fully realize that a year ago the Raptors could very well have been last night’s Celtics team…the one that was lacking talent but played out of their minds only to come up short…but that’s still no excuse for last night’s performance. Toronto was essentially matched up against an NCAA team (Kentucky, Villanova, Cal, Providence, heck even High School) yet looked quite amateur themselves, something that surely doesn’t bode well for Sunday’s match versus the Mavs.

The Mavericks are one of the league’s most complete teams at both ends of the court and Toronto is going to need a much better effort than the one they put forth in their past two games to even stay in this coming Sunday’s affair. As per my preview yesterday, Boston did in fact get into the paint off of guard penetration whenever they wanted and the Mavericks will look to do much the same thing. The Raptors need to be much more prepared to deal with this sort of assault and must do a much better job of simply competing for a full 48 minutes.

….something that almost proved disastrous…