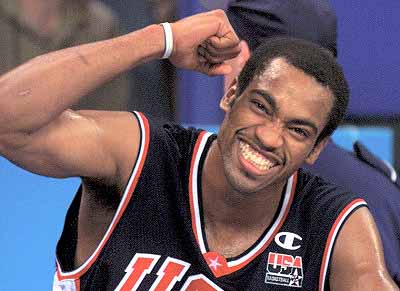 In fact, you know that feeling you get in your stomach after some late-night Chinese food...maybe after one too many Redbull and Vodkas? Well that’s the feeling I can’t seem to shake right about now. The Raptors lost to the New Jersey Nets tonight 101-86 in a game that saw them claw back from a 15-0 first quarter deficit only to get blown out by game’s end. The Raptors were out-played in almost every category (getting crushed on the boards 45 to 35) and simply didn’t compete through the whole 48 minutes.

So where do we start?

I’m sure that’s what most fans will be ranting about today and I admit, it’s an easy topic. Seeing Vince rolling around on the floor as if he had been shot by a 22 surely brought back fond memories. Oh, and how about the fact that it was a poke in the eye that caused the "stop, drop and roll?" No wait, even better, seeing Jason Kidd essentially rolling his eyes at Vince’s antics as if to say "oh, here he goes again. Good thing he doesn’t have my wife to deal with."

(Ooops, inevitable cheap shot at Kidd who filed for divorce hours before the game...guess that photo I posted yesterday was some sort of eerie foreshadowing...)

No, probably the best part was moments after Carter’s "death becomes me" antics, he was filmed on camera hamming it up under a towel.

Wow, Nets fans have it rough.

Watching Carter tonight, especially in the first quarter, reminded me of just how frustrating it is to follow a team with him on it. Is there really any difference between Carter and Dwyane Wade in terms of their ability to get to the basket? It’s unreal that he doesn’t average over 30 points a game and get to the line 12 times a contest.

But we’ve been over the Vince stuff before and that’s now Jersey’s problem.

My problem was how Toronto dealt with the ex number 15. I know Sam likes his big lineup but it’s common knowledge that the more physical you get with Carter, the more effective you are in guarding him. However it wasn’t until the second half that Toronto started playing Carter this way, something that left this Raptor fan scratching his head. In fact, I’m not sure why Sam didn’t play Morris Peterson on Carter...unless he had visions of the "slapping incident" from a year ago. But Peterson is the player who knows Vince’s tricks the best and Richard Jefferson was too physical for Mo in the post. Joey Graham continued his streak of inconsistency but I would have liked to have seen him get more minutes too and perhaps even some playing time guarding Carter.

However anyone who watched this game knows that Vince was just part of the story.

Toronto simply couldn’t buy a basket at times and fell back into their habits of settling for outside jump shots. And a lot of credit for this has to go to New Jersey coach Lawrence Frank and his staff. Not only did they have the Nets play aggressively from the outset, but I’m not sure I’ve seen a team do as good a job defensively on Chris Bosh as New Jersey did last night. The Nets were physical in denying CB4 the ball and even when he did get a touch, New Jersey swarmed the Raps’ franchise player forcing him to give up the ball or settle for an extremely tough shot.

Bosh wasn’t the only starter who struggled either. Together, TJ Ford, Rasho Nesterovic and Anthony Parker had only seven points going three for 18 from the floor. After the game Ford said that his ankle wasn’t the problem but it sure looked to be hampering his movement to me. He wasn’t getting the proper lift in his jump-shots and just didn’t seem as comfortable going to the basket. Mitchell stated that he was going to give last night’s starters the box score so they could "Take it on the bus with them, put it under their pillow and sleep with it..."

In fact if it wasn’t for Toronto’s tremendous bench play (they outscored the Nets 57 to 24) it wouldn’t have been close. Jose Calderon (16 points and 12 assists) and the ever-improving Andrea Bargnani (22 points including four 3’s) were especially spectacular but New Jersey was able to make adjustments after half to limit their effectiveness as well.

So now Toronto is forced to put that one behind them and get ready for a banged up Bucks team tonight. The Bucks are missing Michael Redd and Charlie Villanueva and now may not have Mo Williams available for tonight’s match. Therefore much like last Friday’s encounter with Atlanta, this is a game that Toronto should be able to win handily and an important step in keeping pace with the Nets.

For last night’s game wasn’t just a loss by Toronto, it looked more to me like a statement game from New Jersey and I’m hoping that it serves as a wake-up call for the Raptors. Charles Barkley had picked the Nets to come out of the Atlantic and challenge for the NBA title this year and really, if you saw last night’s game, there’s no reason this shouldn’t be the case. In fact, it’s unreal that New Jersey’s record has been this poor based on the players they have. Yes, the bench is quite weak...but when you have two guys who can go for 30 on virtually every night in Carter and Jefferson, and one of the greatest point guards of all time and an excellent leader in Kidd, there’s really no excuse.

Toronto simply got beaten by a better team that it wasn’t ready for last night. As the season progresses hopefully this will change though and I’ll anxiously be waiting for the rematch on February 14.