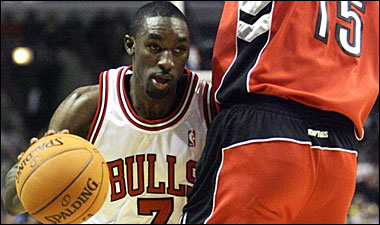 Tis' the season to be at Christmas parties.

As a result, neither Howland or myself got a chance to see all of last night's tilt, one that ended with Toronto's 14 straight loss to the Bulls 93-90.

However after much morning research, and some RaptorsTV re-hashing, it looked like this one was another game Toronto should have come away with.

After leading 29 to 19 at the conclusion of the first quarter, Toronto simply didn't do a good enough job rotating out on Chicago's wing players (something Sam Mitchell bemoaned after the game and something we alluded to yesterday in our game keys) and in the end that sunk the Raps.

In addition, Toronto only got to the free throw line 16 times as oppposed to Chicago's 27. Once again, the Raptors, with only a few more trips to the line, might have stolen this one back had they shot even seven or eight more free throws last night; especially since Toronto did a solid job on the glass grabbing 41 rebounds to the Bulls 43.

Morris Peterson made his return last night and while both he and TJ Ford missed potential game-tying shots, Peterson played 26 minutes and went four for nine from the field. Mo Pete got some of Andrea Bargnani's minutes who missed last night's match with back issues. Bargnani may play tomorrow against Portland but looks to be a game-time decision.

Chris Bosh is also playing banged-up and struggled from the field for the second straight game going five for 14 and getting to the line only four times. If Bosh isn't at 100 per cent for tomorrow's contest, he's going to have his hands full with Portland's Zach Randolph.

So how does Toronto get back in the win column?

Well for starters, the Raptors have to score the ball. Offensively the team's struggled in the past few games and if Andrea Bargnani can't go and Bosh isn't 100 per cent, Toronto's going to need other players to step up. Portland's only averaging 93.3 points per game (fifth worst in the league) but can get to the line and is only percentage points behind Toronto as one of the league's better free-throw shooting clubs (77.98 per cent to 78.82.)

On top of scoring the ball (and yes that means getting to the free throw line at least 20 times) the Raptors should be able to control the glass in this contest. Portland in spite of their front-court size, is the worst rebounding team in the league averaging only about 37 per game and if the Raptors can grab rebounds and get out in transition, it should play right into their favour.

Finally, Toronto needs to do a number on Zach Randolph. Randolph is having a career-season, the type the Blazers expected him to have when they signed him to a max contract only a few short seasons ago. Randolph is averaging 25.9 points and 10.2 rebounds and as mentioned, will be a handful for the Raptors down low. We may see Sam Mitchell give the assignment of defending Randolph to Jorge Garbajosa or Rasho Nesterovic in order to allow Chris Bosh to guard LaMarcus Aldridge, a player who has drawn many a comparison to the Raptors' franchise player.

In any event, we feel this is a must-win game for the Raptors.

Next week Toronto faces Miami and Orlando away from home and then New Jersey and Golden State at the ACC, all tough matches for the Raps. If Toronto can't get a win against the inexperienced Blazers tomorrow, it could mean a nasty losing streak for the Raptors heading into the end of the month, something that regardless of the division they reside in, won't bode well for Toronto's playoff chances.