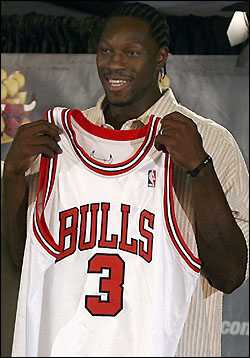 When the Chicago Bulls obtained Ben Wallace in the off-season, many experts heaped praise on Bulls' management for putting, what appeared to be, one of the final pieces in the puzzle to contend for an NBA Championship. The team was already packed with young talent and was one of the league's premier defensive clubs. The addition of Wallace was supposed to bring the veteran leadership, and playoff experience the team needed to take their game to the next level...not to mention perhaps the league's premier defensive player to complement what was already a stifling defensive core.

Well, a few headband tosses later, as we all know, that hasn't exactly been the case so far.

However after a three and nine start, the Bulls have won their last six games and appear to be putting some of their early-season malaise behind them. Ironically, it's the Bulls offence that's made the difference recently and not their much-revered D. Currently Chicago is scoring on average 100.3 points per game, good for seventh best in the league, while shooting a respectable 46.32 per cent from the field. Much like the Boston Celtics, much of the Bulls' offensive barrage comes from beyond the arc where the team is shooting almost 40 per cent.

The flip side of the coin, Chicago isn't doing much better than Toronto defensively in many categories. In fact, the Bulls are only percentage points better (46.22 versus 46.86) in terms of limiting opponents field goal percentages, and simply aren't doing as good a job so far this season in terms of stopping penetration to the basket.

And this does indeed seem quite strange considering they now have Big Ben lurking in the paint.

Perhaps the Bulls are simply victims of the NBA's new rules. Whereas last year the Bulls' guards played a physical defensive style on the perimeter, this year, Chicago can't play that same style without risking sending opponents to the free-throw line in a steady stream. And that probably explains why the Bulls are allowing their opponents to shoot on average close to 30 free-throws a game...fourth worst in the league.

And if that isn't a segueway, I don't know what is.

Toronto has to do a better job than they did on Wednesday night of getting to the free-throw line. As the stats have indicated, the Bulls will try to body the Raptors up and therefore Toronto needs to use its quickness to draw fouls and gain the advantage at the line.

The other advantage Toronto should be able to exploit believe it or not is on the boards. Ben Wallace has been disappointing in this regard and currently the Bulls are in the middle of the league in terms of rebounding statistics. Toronto has quicker and more agile players up front than Chicago and therefore should be able to hold their own in this regard. They should also be able to exploit various mismatches as neither Ben Wallace nor PJ Brown are going to be comfortable guarding the likes of Chris Bosh and Andrea Bargnani. If Toronto can pull these two away from the basket, it should open things up for the slashing games of TJ Ford and Jose Calderon.

Finally, the Raps have lost 13 straight to the Bulls for a reason, they simply don't match up well with Chicago. While I'd argue that this year is a bit different, the Bulls' quick, aggressive and multi-talented group of guards are a handful for any team and containing them is going to be the single biggest key to a win in my opinion. Toronto has not defended well on long-range shooters and the Bulls' are unfortunately chock full of them, especially on the perimeter. If the Raps can't challenge the likes of Ben Gordon, Andres Nocioni and Kirk Hinrich, it's going to be a long night.

Like Wednesday night's match with the Cavs, this is a game that Toronto can win as I for one am still not sold on the Bulls rebirth. Yes, they've won six in a row but look at the teams they feasted on....

Let's hope that the Raptors don't become their latest meal.