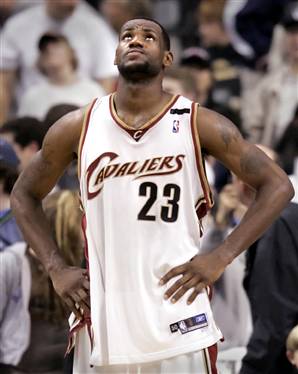 "When you got a guy like LeBron you really don't sweat it," said rookie Daniel Gibson after last night's 95-91 victory by the Cavs over the Raptors.

Can we call this statement the game in a nutshell?

Here were the Raptors, up seven with about five minutes to play, looking quite in control of the game. They had played excellent basketball for 43 minutes, even coming back after a slow start to take the lead. They had hit their shots, (albeit not from long range) had done a great job mixing up defensive schemes, and were getting contributions from the entire team.

So what went wrong? How did a game that looked to be firmly in Toronto's favour get away?

Well, after the game, coach Sam Mitchell simply played it off as the Cavs making timely shots and Toronto not making theirs, especially Chris Bosh.

Yes Bosh had a sub-par game by his standards, but I can't simply dismiss this match by chalking it up to poor shooting and the rare night when Toronto doesn't get 24 and 13 from CB4. He did still have 18 points and 12 rebounds, the problem was he shot only 36 per cent to get those 18.

No, there's more to the loss than that...and let's start at the free-throw line.

Toronto started settling for jump shots in the second half instead of driving the ball to the basket, which was the inverse of what they did to beat Cleveland two weeks ago. For the game, Toronto attempted only 13 free throws. Getting to the line even five or six more times would have buried the Cavs and made the back-to-back three's by Damon Jones and Donyell Marshall with five minutes remaining, much less damaging.

Instead, these two successful 3-pointers cut the lead to two, and then Lebron took over. And perhaps beyond Toronto's inability to get to the free-throw line, this was the most frustrating element of the game.

Just as the quote by Daniel Gibson suggested, Lebron makes it look so easy. He rarely attempted to dominate up till the game's final few minutes yet still scored 26 points and dished out 10 assists. Lebron really seemed more content to set his team-mates up, and let them fire away from the perimeter for most of the game. And this really played into Toronto's favour. As long as Toronto was scoring at the other end (the Cavs defence was atrocious at times) and contesting the shots from the perimeter, I'm sure they'd take that any day over having to deal with Lebron ramming the ball down their throats and getting to the line. In fact the Raptors allowed James only five free-throw attempts, an impressive stat considering his ability to draw fouls. Yes, for some reason, the Cavs this season have been hell-bent on running most of their offence through their backcourt!

Case in point from last night..

Sure, Gooden and Varejao aren't exactly Tim Duncan clones, but all three have the ability to exploit the smaller Raptors' front-court and yet Cleveland's guards rarely glanced in the trio's direction and kept firing from the perimeter! Part of the Cavs' success last year was the inside-outside game formed by having someone like Lebron who could both score and distribute the ball, and someone like Ilgauskas, who could play inside and draw defenders away from Lebron and the perimeter shooters like Damon Jones. And now for some reason, the roles are reversed as Cleveland's bigs have become the periphery while the Cavs have transformed into a jump-shooting team.

Unfortunately for Toronto, no sooner had Chuck Swirsky basically announced that the Raptors had things wrapped up with five minutes to go, then the likes of Marshall and Jones started hitting those same jump shots and the tide had turned. Lebron then simply would not let his team lose and carried the club through to the finish line.

Yes, the Cavs coasted at times last night and maybe didn't "deserve" the win. But when you have a player like Lebron James coupled with some of the league's best long-distance marksmen, you can afford to take a few plays off. Heck, Toronto did that last year because their three-point shooting was good enough to get them back from just about any deficit.

This year, that's not a luxury the team has. Toronto hit only three of its 11 attempts from beyond the arc last night and simply isn't a good enough shooting club at this point to get caught up in a five-man game of Skunk with the opposition. Therefore, the Raptors are going to have to learn over the course of this season, to play consistent basketball for a full 48 minutes in order to win games such as this.

Either that, or Morris Peterson (who was back in the lineup last night but did not play) is going to have to suddenly return to the player he was last year to give this team a dramatic boost.