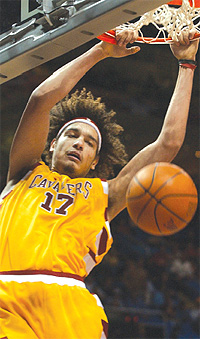 With a win tonight Toronto can claim top spot in their division.

Unbelievable as that statement is, the Raptors' recent play has given them a chance to set the pace in their grotesque division and bodes well for the team's playoff chances.

ESPN.com's latest batch of power rankings has Toronto sitting at 21 and that seems about right. Wins against the Cavs tonight and the Bulls on Friday would certainly send that ranking even higher but right now the Raptors need to simply focus on beating the Cavs.

In fact the Cavs have been in somewhat of a tailspin since their loss to the Raptors two weeks ago. Lebron's been doing his best to keep the Cavs' collective heads above the water but he's not getting much help and the Cavs have lost four of their last six.

The Raptors have played some decent defense as of late and did a good job on the James' supporting cast last time these teams met. The Cavs saw lots of zone and expect that to be the case again this evening. As long as Toronto can keep Lebron from getting too many open looks for the likes of Marshall, Pavlovic and Damon Jones, they should be able to keep the Cavs' offence in check. In fact, our hope is that Sam Mitchell and his staff spent lots of time with the Raps going over tapes of Cleveland's Saturday night loss to Houston...a game in which the Cavs scored only 63 points.

So who gets the start tonight? Mitchell's been adjusting his lineup according to matchups recently but he may not have the luxury of doing that tonight. Chris Bosh's recent string of bad luck injury-wise continues as due to an infection in his left-eye, he's questionable for tonight's match. It sounds like he'll be ok to go however but besides TJ Ford and Anthony Parker, the other starting spots require a bit more guesswork. Rasho Nesterovic has had some success at the 5 in the past few games, and does match up well with Zydrunas Ilgauskas. But Mitchell may want to go with a smaller, quicker lineup and play Bosh and Jorge Garbajosa at the 4/5, Anthony Parker at the 3, TJ Ford at the 1 and maybe Joey Graham (based on his success last time against Lebron) at the 2. It sounds like Morris Peterson will be back for tonight's match so we may even see him get the nod provided he's 100 per cent.

No matter who starts, Toronto's bench is going to play a big part as always in this match. Last time these teams met, the Raptors got great minutes from the likes of Calderon and Graham and Andrea Bargnani really started to show what he could do. All three of these players have been playing well since then and Sam Mitchell will need solid performances from each in order to end the night with the W.

Finally, Toronto needs to stick with what it's been doing recently in order to continue their success. Rebounding on both ends of the court, getting to the free-throw line, making their long-range attempts when open, playing smart half-court offence, attacking the rim...yes, all of the above will be key in deciding tonight's match. With the a tough schedule next week (Miami, Orlando, New Jersey and Golden State) a win tonight would keep Toronto right in the thick of the playoff crawl.