Welcome to the Circus

Share All sharing options for: Welcome to the Circus 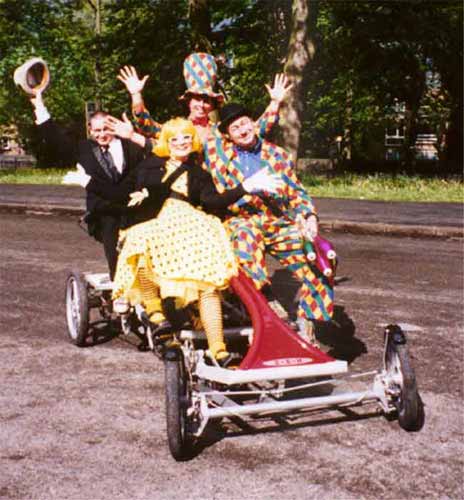 Since MLSE decided that 24 of this season's Raptors' games should be broadcast on RaptorsTV, the complaints have been frequent...

...and yes, in my opinion justified - but not solely for the reason that fans are having to pay to watch.

My reason for disliking the move goes deeper than any increase to my already outrageous cable bill. No, my prime complaint is content based, or better yet, the lack of understanding demonstrated by the producers concerning the demographics and knowledge base of those who actually do pay to watch.

Let’s take a look at RapsTV.

The supposed rationale for putting Raptors' games on this network is to ensure they can be broadcast nationally. Generally when TSN, Sportsnet (Central) or the Score have broadcasting rights over a particular Raptors game, they are limited, geographically to where the game can be shown. Cities like Halifax, Winnipeg and others are forced to watch local or regional broadcasting (I can attest to how brutal that can be being from the latter) while the fortunate souls in Toronto get their fill of Raptors' ball. When the decision was made to move 24 games exclusively to RaptorsTV one can only assume it was done for two reasons: (I) to grow interest in Canada’s sole NBA franchise coast-to-coast; and (II) profit.

Let’s take a look at each of these rationales.

When looking at reason one you have to start with one basic principle - Hockey reigns in this country. Take Saturday night for example when Franchise and I went looking for a bar to watch the Raps game against the Knicks. Sure we knew that the Leafs and Canadians were on TV, but we figured the Raps game would be on somewhere. Well it was...sort of. Of course we had to ask for the game to be put on a TV, and while the bar did oblige, it should come to no one’s surprise it was a corner TV in the back that was given to us for our viewing pleasure. We knew it would work out that way, and we were not expecting anything different yet I bring this up to reinforce the fact that basketball is a second class citizen in Canadian sport. Fine.

This tells us two things. The first is that basketball faces an uphill battle for "play time" amongst Canadian sports junkies, and two, that since the franchise was born, interest in this team on a local level has not grown enough to cause bar owners to think twice about not putting the "game on" most of the time.

So how I must ask, does making people pay to watch help to sell the game? If you are a sports fan in BC or Alberta why would you pay to watch a sport that you only have moderate or passing interest in? You wouldn't.

As a result the "grow the game" idea is inherently flawed. I am not putting the blame solely on MLSE here, because there are an enormous amount of broadcasting rules and regulations that determine what can be broadcast in certain regions and until TSN and other networks are allowed to broadcast games nationally, then RapsTV is the only real alternative. Therfore, as long as this is the case and RapsTV is a pay service, then interest in the dinos and the NBA will remain a distant second to any hockey team. Should this be true, one can argue that the RaptorsTV is not intended to grow interest in the game, but rather to turn a healthy profit.

Everyone has heard that MLSE is more interested in making money than putting a championship team on the ice/court. True? Well I will let you decide, but as I mentioned at the start I don’t mind paying for the games and adding to MLSE's coffers...sort of. I, amongst many others, pay for RapsTV to follow the Raptors and get better NBA coverage as a whole. In theory, the channel was meant for the more hardcore basketball fan, the fan who wants more stats, more details, and more information on the intricacies of the NBA game. Fans want the inside scoop on the team and the NBA in general they want knowledgeable people providing knowledgeable insight. Well here is where RapsTV gets it all wrong and why I am debating cutting the cord on my subscription despite the requests to "visit www.raptors.com" or "call the appropriate number to provide feedback."

The 2006-07 season has brought about many changes to how Raptors' games are broadcast. There is the new Centre Court HQ (no there is no affiliation), Norma Wick has gone from courtside reporter and token "ask Jim Todd a question" woman to the centre of the broadcast team, and there seems to be a steady flow of new guests on during a broadcast. Of course not everything has changed. Chuck is still the sole play-by-play voice of the Raps, and Leo and Jack continue to provide the colour.

On a whole all of these changes, or lack thereof, have been total disappointments. When it comes to the Centre Court team of Norma, Paul Johnson and Sherman Hamilton, their ability to provide anything close to detail or in-depth analysis is laughable at best. But of course laughing is one thing these guys do best. Over the course of the season the amount of professionalism displayed by each has progressively gone downhill. Inside jokes, random nonsensical comments and just poor understanding of the game has made this trio virtually unwatchable. Whether it’s putting on headbands, talking about how Kevin Duckworth is 600 pounds, or trying to breakdown the game in BASIC terms, their "value added" amounts to well...nothing. As a result I end of asking myself time and time again why I pay for this? This is exactly the type of broadcasting I had hoped to avoid by paying for my basketball coverage. Paul Johnson would be a better MC at a wedding then playing host to the pre and post game discussions, Norma is now clearly outside her niche and Hamilton, whose role one can only guess is to be the analyst, provides little more than basic basketball talk. It in fact has become so bad that Brian Heaney and Rod Black on the TSN broadcasts are more enjoyable!! At least Heaney can get in front of a teleprompter and breakdown the game in a way where we the fans, and the audience in general, can understand in greater detail what is transpiring on the court and discuss some of the more interesting play-calls used by coaches. The scary part is Heaney does the TSN broadcasts...the same network that lives and dies by hockey, curling and WWE!! How is it that the basketball network cannot find someone at least equal to, if not better than this guy?

If the people who are paying for this product are the knowledgeable basketball fans you can’t tell me that having this gang on display time and time again is what they want! I am damn sure that this is not what I want and all I want is what I'm currently paying for!

So if the rationale is not to grow the game, and the network is having true basketball fans debate the value of the network, hence risking profitability, then what is left?

To be fair however, the Centre Court team is only one ring in this broadcast circus. The ring leader is of course the Swirsk.

The problem with Chuck Swirsky is simple. It’s not his passion for the game or bias towards the Raps, nor is it his actual broadcasting skill that's at fault but the fact that he tries to be the entertainment rather than discussing the entertainment. The "salami and cheese," "the ring it ups," "the sick, wicked and nasties," and incessant use of nicknames is all too much. Just once I would like to hear Chuck say something as simple as "Bargnani with the three," rather than "Il Mago with the (insert Italian term of some sort.)" It is all overkill at this point and this overkill is not allowing new fans to learn to appreciate the game itself. It is the game that is supposed to be entertaining and frankly Swirksy is taking away from that rather than adding to it.

The perfect example of this is the three-point streak. No-one really cares. Watching the Mavs game, in which Toronto extended their streak at the buzzer, my interest as a fan was not whether the team hit a three, but how or better yet why they lost the game. I would suggest the team's overall play is more important then whether Darrick Martin hit a long three to keep the streak alive. Yet for some reason it was the latter that was the focus of the in-game and post-game broadcast rather than the former! Of course knowing Swirsky is an employee of the Raptors and MLSE means that it should not be surprising that he focus on the positive rather than the negative, but Chuck could not let go of the extention of this record even though the team had just been throttled by the Dirk-less Mavericks.

If I have said it once I have said it one-hundred times. We could have the worst starting five in the league, be maxed-out cap-wise, and owe our next three first round picks to the Knicks, and he would still tell the fans that the team is headed in the right direction. No wonder some people have a hard time getting into this team after years of losing! It’s like the boy who cried wolf and now many fans have tuned him out. The reality is there is a true lack of credibility.

Now let me end this tirade on a more positive note. Not all of the broadcast media butcher this team or the game experience. Eric Smith and Paul Jones have a solid radio gig and they discuss interesting topics. When they add Jack you actually feel like there is something to be gained by listening in, or watching on Hoops. In fact Jack, and to a lesser degree Leo (also a serious culprit of letting inside jokes overshadow his commentary i.e. Chuck’s lack of hair) are the saving graces. Jack adds value - Point blank. He knows when a joke or an off-the-cuff comment is acceptable and he is willing to take subtle shots at Chuck when his play-by-play becomes unbelievably biased, or just too much (his response to Chuck attempting to send Bargnani to Springfield already is a perfect example.)

At the end of the day I don’t expect anything to change given the landscape of Raptors broadcasting. Until the MLSE and RapsTV realize that the people who watch don’t need things dumbed down, and there is an emphasis on the game itself, then nothing will change.

And even if things do change, yes, Franchise and I will still end up watching the games in the corner of a bar on the little TV. I guess it's our hope that the din of the Swirsk Circus will be droned out by the Leaf fans watching their team...on the big screen of course.