Tip-In: Ending on a Sour Note

Share All sharing options for: Tip-In: Ending on a Sour Note 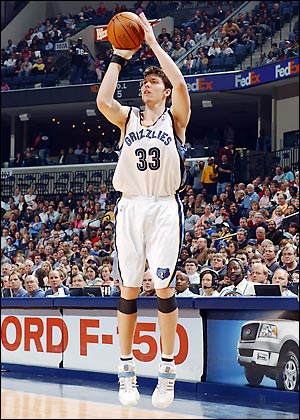 Tony Barone had his team up for the task. Sam Mitchell didn’t.

The Raptors came out flat while the Grizzlies were firing on all cylinders leading to an eventual 110 to 104 Toronto loss to Memphis last night in a game that saw the Raptors claw back from a 24 point deficit only to lose in the end.

The Raptors allowed the Grizzlies to score 39 points in the opening quarter, digging themselves a hole that may have proven too deep to climb out of considering how short-staffed they were. Already without Bosh and with TJ Ford sitting due to an ankle injury suffered the night before, Jorge Garbajosa now appears to be day-to-day after injuring his calf late in the fourth quarter.

Morris Peterson led the Raps with 19 points and while Toronto had five players in double figures, they allowed Memphis to shoot a blazing 54 per cent in the first half and had no answer throughout the entire game for Pau Gasol and Mike Miller.
In fact after completing the successful comeback on a Mo Pete 3 with about six and a half minutes left in the game, Miller then drained back-to-back three’s to put Memphis back ahead for good.

This one was personally one of the toughest games of the year to watch.

The Raptors played so poorly at times (they had 18 turnovers again) and got down by such a big margin early on, that I was tempted to turn it off. Missed assignments on D, missed free-throws, poor decisions in transition leading to Memphis’ dunks...it all added up to an ugly site. On top of this, the game was a complete tease as Toronto did by all accounts make an impressive run, but only to come up with the short end of the stick.

And what really struck me was just how similar this game was in some ways to their previous loss to the Bulls. Toronto hung around on the boards (only out-rebounded 41 to 40,) got to the line a decent number of times (30) and made their runs but also settled for way too many outside shots (they attempted 27 shots from beyond the arc) and couldn’t guard a turnip at times.

It also struck me that as one of our readers "axl" put it, ("not really looking forward to a desperate Grizzlies squad,") timing had something to do with this loss as I hadn’t seen any team, let alone Memphis, come out so fired-up for a game and the recent coaching switch (think Mike Fratello heads back to being the "Czar of the Telestrator?") seemed to have fueled this fire.

The bottom line for me in this loss was that this is not how I wanted the Raptors to finish off a reasonably successful 2006. Some of the local media this morning seems to be "looking on the bright side" of the loss last night considering Toronto’s injuries and the fact that Toronto made a heroic run outscoring Memphis 86 to 71 over the final three quarters.

No, I’m not ready to pat the team on the back and say, "thanks for making it close." The fact is, if Toronto had even held Memphis to 30 points (still too high by NBA standards but anyways) they would have probably won this game.

And when the final bell tolls on the season, it’s games like these that Raptor fans may look back on and say "well, that’s one they shouldn’t have let get away."