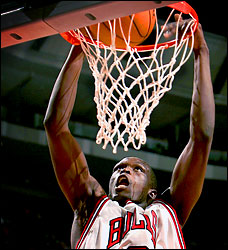 There’s just not much you can say.

The Raptors dropped their fifteenth straight game to the Bulls last night 107-97 and played right into Chicago’s hands in a game that even after leading at the end of the first quarter, they never really seemed to be in control of.

The Bulls outscored the Raptors 28 to 14 in the second quarter and never really looked back getting huge games from Luol Deng and Ben Gordon, neither of whom Toronto had an answer for.

In fact, Toronto did exactly the things we said they couldn’t do yesterday if they were looking to come out of last night’s match with a win.

-Toronto’s perimeter defence was terrible, allowing the Bulls to shoot almost 60 per cent from the field.

-The Raptors, the second best team in the NBA at taking care of the ball, turned it over 18 times preventing them from ever being able to make a good run.

-Frustrated with the Bulls long-range accuracy perhaps (Chicago made eight of their 14 long-range attemps) Toronto took 26 of their own making only nine. In addition, Toronto only went to the free-throw line 21 times as the team settled for jumpers and tough shots from the perimeter.

-And to top it all off, Toronto certainly didn’t make very many of the jumpers they did take shooting only 40.7 per cent from the field.

What really would have been the icing on the cake in a bad game was an injury to TJ Ford. Oh wait, that did happen. Ford went down in the game’s final minutes with an ankle injury and is listed as day-to-day. Therefore we may be seeing a good deal of Darrick Martin once again tonight in Memphis.

Perhaps the most frustrating thing as a viewer was that above everything else, the Raptors did out-rebound the Bulls but didn’t bring the energy and toughness we discussed yesterday as being so important against a team such as the Bulls. As a result, Toronto’s defence simply got shreded by the Bulls’ perimeter players who scored from inside and out. Sam Mitchell after the game said he couldn’t remember Luol Deng miss a shot and that Ben Gordon had simply made some ridiculous ones.

But that shouldn’t be a surprise, these two have been playing like this for most of the season and hopefully the word that Deng was playing with a sprained wrist wasn’t cause for the Raptors to relax.

And relax is something they can ill afford to do tonight in Memphis.

Yes the Grizz on paper are the worst team in the league.

Yes, they just recently fired their coach, are still in the somewhat garbled process of being sold.

Yes, Pau Gasol has only recently returned from injury and is still trying to work his way back into game shape.

But the travel and back-to-back will be taxing enough for Toronto and the Raptors need to win this game. New Jersey defeated a barren Heat team last night and although Boston and New York both lost, this is a game Toronto needs to win to keep on track heading into the new year.

Memphis sits near the bottom of the league in most offensive categories and is the Association’s worst rebounding club. However it still can get stops and this has to be a concern for a Raptors’ club that may not have the services of TJ Ford tonight. If Ford can’t go, Toronto is going to need to get offensive production from the entire club including some unlikely sources like Darrick Martin if they wish to get win number 14.

I’m expecting a low-scoring drag’em out affair, but with a collective team effort, better care of the ball and some key plays from the likes of Joey Graham (who had 17 points last night) this is one Toronto should be able to put in the win column.