Share All sharing options for: Game-Day Preview vs. Bulls 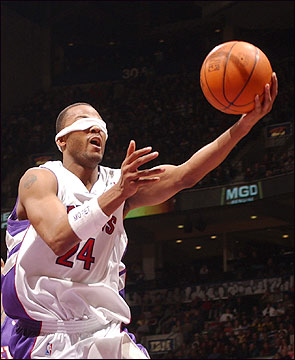 Morris Peterson is my favourite Raptor.

Not just on this club, but all-time.

I’ve watched him since his days at Michigan State and have always liked his game. Nothing too flashy (well, except some of those ridiculous circus shots and buzzer-beaters he’s made) just a player who always gives the proverbial 110 per cent. Yes, he’s struggled so far this season with injuries and inconsistent minutes, but he’s still a good defender and above-average marksman, especially from those corner pockets.

So should Toronto be considering moving him?
According to the local press, that’s exactly what is happening right now. Today’s Toronto Sun discusses the possibility of moving Peterson as his role seems to have diminished with the club and his contract situation and skill-set make him perhaps the Raptors’ most tradeable asset.

ESPN.com’s Chris Sheridan has Peterson on his "most likely to be traded" list at number three behind only Corey Maggette and Ron Artest, with possible destinations being the Celtics, Heat, Hornets, Jazz, Pacers and Bulls. I’m not sure Peterson makes sense on some of these teams (Celtics?) but regardless, his name is definitely out there.

I’m not ready to jump on the "trade Mo" bandwagon yet but I’m not about to miss the big picture either. If the Raptors could move Peterson to net a solid rebounder or shot-blocker, or even an athletic small-forward, I’d definitely have to consider it and so should Bryan Colangelo. I think the problem however is that it’s still too early to push the button on something like this. Most teams are still getting an idea of what type of squad they have, while others are waiting for players to return from injury. No one wants to hit that "break in case of emergency" panic button yet.

On the other side, I still think Peterson could be a major contributor for Toronto. The Raptors’ three-point shooting has been better as of late, but could still use some more consistency, something I think a healthy Peterson can provide. I also think that a healthy Mo gives the Raptors that extra person who comes up with the key hustle plays and until we see a consistent Joey Graham or Fred Jones, I hope that Colangelo doesn’t make any rash decisions.

Peterson might be back in action tonight against the Chicago Bulls as he’s listed as day-to-day with a sore right hamstring. The Raptors of course have lost their last 14 games to the Bulls and a win tonight would be a huge statement. Not only would it stop the bleeding in terms of Toronto and Chicago’s recent matches (and when I say recent I mean that Toronto hasn’t beaten the Bulls since Chris Bosh has been a member of the team) but it would further propel them in the Atlantic Division standings, get them to two games under .500 and be a quality win over one of the Eastern Conference’s best clubs.

To get the win though, Toronto is once again going to need a complete team effort and more TJ Ford. The point-guard match-up tonight is going to be one to watch as the seventh and eighth picks in the 2003 draft go head-to-head. Ford has been playing at an All-Star level as of late while Kirk Hinrich has been inconsistent at the helm for the Bulls. If Ford can maintain his recent play and use his quickness to break down the Bulls’ defence, this will give the Raptors a huge advantage.

The Bulls will be countering in a similar manner with the likes of Ben Gordon and Chris Duhon, two players who’ve given the Raptors fits every time they play. Toronto simply doesn’t match up well against Chicago, a tough, gritty, defense-first team that uses its quickness to exploit match-ups and open things up for their perimeter shooters like Andres Nocioni. In fact, that’s one of the most deadly things about the Bulls. Besides Gordon, they don’t necessarily have a ton of go-to-the basket scoring (see Ben Wallace) but most of their players are streaky shooters that can light it up in a hurry. And Luol Deng continues to emerge into one of the most well-rounded talents in the league who can score from inside and out. Sam Mitchell is going to need to find creative ways to use his various zone defences or get enough man-to-man defence to keep the outside attack in check. If Toronto can force players like Wallace and PJ Brown to become scorers, this bodes well for the W.

Most importantly, Toronto needs to equal Chicago’s intensity level on both ends of the court. The Bulls have several rough-and-tumble types like Wallace and Nocioni who excel in getting garbage buckets and offensive rebounds, the type that can be quite disheartening for a team after getting a stop. If Toronto can limit these opportunities and win the battle of the boards, it puts them in a good shape. The Raptors face a Grizzlies club who just fired their coach and have won only six games all season tomorrow night and a win tonight against Chicago would set things up nicely for a little three-game winning streak to finish off 2006.