Tip-In: "Pointed," in the Right Direction

Share All sharing options for: Tip-In: "Pointed," in the Right Direction 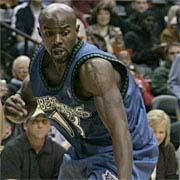 Bryan Colangelo must be grinning from ear to ear right now.

When Colangelo traded rookie sensation Charlie Villanueva for TJ Ford, there was an outcry from most Raptor fans. How could Colangelo trade such a promising young player for someone like Ford, who was viewed as an injury risk and obviously someone who Milwaukee felt was expendable. Yes he might be the answer for Toronto finally at the 1, but at what cost? Trading big for small just wasn’t done in NBA circles!

Ford’s start to the season didn’t help matters either.

He was outplayed by his backup Jose Calderon and drew criticism from many (including myself) for not playing to his supposed strengths and trying to do too much offensively.

Well no one can accuse him of that right now.

Ford was huge again last night for the Raptors scoring a season-high 28 points while dishing seven assists and grabbing four rebounds in the Raptors’ dramatic 100-97 win over the Minnesota Timberwolves. Yes Ford almost went from MVP to goat when he fouled Mike James on a three-point attempt late in the quarter, but he also made some clutch plays in the game’s final minutes to get Toronto the lead and help keep it.

Of course for added drama in front of a sold-out ACC, the Raptors let what looked like a convincing four point lead with less than 30 seconds left, evaporate into only a one point cushion as forced to foul, the Timberwolves were given new life when Anthony Parker and Jose Calderon went one for four from the free-throw line. Luckily, Mike James, who was fouled by Ford while attempting the aforementioned three, hit only two of his three to keep Toronto’s lead at 1. Parker then closed things out hitting two more free throws as Kevin Garnett’s desperation three near the buzzer missed its mark.

Garnett finished the game with a team-high 24 points as well as nine rebounds and six assists. However he had to do most of his scoring in the second-half thanks to some excellent defense from Rasho Nesterovic. Nesterovic had nay a foul in the match and played KG like someone who had practiced against him for five years...oh wait...he did back when both were T Wolves.

Toronto also did a fairly good job defensively overall last night. Minnesota shot 47.4 per cent from the field but only 33 per cent from long-range and Sam Mitchell had his club forcing the Timberwolves into as many tough shots as possible. In the first half many of these were falling but in the second, the percentages game caught up with Minnesota as some of the T-Wolves shots were way off. (Ricky Davis - five for 16.) Mike James, a player who loves these type of "payback" situations had a decent game for the Timberwolves, but missed a few key shots when they mattered most. He finished the game with 20 points and five assists on eight of 12 shooting but didn’t quite seem like the player who we had dubbed "Space Mountain" last season.

And maybe it was the boo’s that rattled him.

For some reason, fans at the ACC decided to boo James in the introductions and nearly every time he touched the ball.
I can understand booing Vince. I even sort of understand the rationale behind booing a McGrady or Stoudamire.

So much for Christmas cheer.

Maybe the best (or worst) part of the whole affair was the Raptors’ broadcast showing clips of James heaping praise on the city of Toronto (he even went so far as to call it one of the best cities in the world,) only to have the broadcast revert back to live action where the fans were booing James.

No it wasn’t quite the same venom that gets spewed Vince Carter’s way, but we’d love to hear from anyone who was at the game to give us an indication of just how much of the ACC was taking part in the taunting. I mean, he left as a free agent when Toronto made it clear that James wasn’t part of Toronto’s plans!

And let’s end things off on the topic of point guards.

While Ford and James were having their own battle (how about the sick crossover that Ford pulled on James leaving him on the floor?) Jose Calderon was almost as large in this match in only 16 minutes of play. He had 13 points and four assists but it was his timely baskets and heads-up play that helped Toronto finally wrench the lead from Minnesota in what had been a truly back-and-forth affair during the game’s final quarter. Together, Ford and Calderon had 41 of Toronto’s 100 points and showed once again just what a great tandem they make for the Raptors.

And yes, Bryan Colangelo has every reason to smile for helping to make this possible.