Tip-In: Top of the World Ma!

Share All sharing options for: Tip-In: Top of the World Ma! 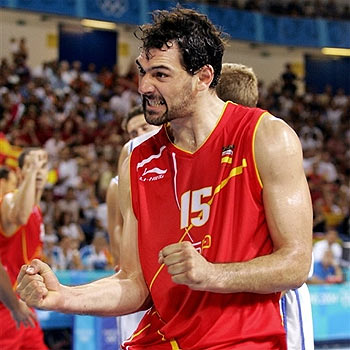 If you like basketball, you’re loving the Toronto Raptors lately.

Last night the Raptors rode TJ Ford to a 101-100 OT win over the Portland Trailblazers in a game that was closely fought from the get-go. As a result of their win and both New Jersey and Boston’s losses, the Raps find themselves a half game ahead of the class, and in top spot of the Atlantis division for the first time since November 25, 2003!

For someone who was clearly off the TJ Ford bandwagon earlier this season (even comparing him to Michael Vick) I’m starting to have second thoughts. Ford took over the leadership duties for Chris Bosh scoring Toronto’s first nine points in over-time before finding an open Andrea Bargnani for the game winner with 3.5 seconds left in the extra session. Portland’s Zach Randolph, who also had a solid game with 20 point and seven rebounds, missed a jumper as time expired and the Raps celebrated the win for the second time that evening.

At the end of regulation, with the score dead-locked at 90, Jorge Garbajosa appeared to have tipped-in a TJ Ford miss for the win at the buzzer. However after an officials review, it was deemed that they could not ascertain if the Garbs had released the ball prior to the game’s expiration and therefore, the basket was waived-off.

Once again, this was a complete team effort by the Raps who played 11 players. Portland out-rebounded Toronto 46-33 and went to the line 32 times as opposed to Toronto’s measly 15 attempts - yet the Raptors still emerged with the victory. Think last year’s club could have done this? Neither do I. In fact for a while it looked like the free-throw discrepancy was going to do the Raps in as the Blazers, especially in the third quarter, were making a living there.

But aside from the free-throw issues, Toronto once again stuck to its game-plan at both ends of the court attempting only eight three-pointers (of which they made three) and as a result, shot 48.3 per cent from the field. They also held Portland to only 44.4 per cent shooting doing a good job on some of the players that killed the Raps the last time these guys met. Juan Dixon was four for 10, Ime Udoka one for eight, and Martell Webster two for six.

On the other side, Toronto had six players in double figures including solid games from both Jorge Garbajosa and Jose Calderon, back from injury. And what can you say about Il Mago? Averaging 15 points over his last few games, Bargs of course hit the game-winning shot, but more than that continues to display just why he was the number-one pick from last year’s draft. I’m starting to think that only an injury-free Brandon Roy or his own teammate Garbajosa, can keep him away from rookie of the year honours.

So onto tonight’s game, the last of this West Coast swing.

The Raptors’ face a Seattle team that may not have the services of Rashard Lewis (out at least two months with a hand injury) but are expected to have Ray Allen back in action. Seattle has struggled this year on both ends of the court. Defensively Seattle was the worst team in the league last season but overcame this with a blistering offence. This year the offence hasn’t been nearly as effective and defensively, well, they’re allowing opponents to score 101.2 points a game and shoot 47.76 per cent from the field.

However this team can still light it up, especially from the perimeter, and Toronto is going to need to keep their defence locked-in for a full 48 minutes. In addition, Ray Allen can score with the best of them so it’s imperative that Toronto doesn’t let him get off to a good start. Anthony Parker will probably draw the assignment of guarding Allen, assuming he plays, and Toronto may be forced to defend mano-a-mano to prevent Seattle’s gunners from breaking down their zone defence.

Toronto will need another solid team performance and needs to get to the free-throw line better than they did last night. Seattle is allowing teams to shoot on average 27 foul shots a game and if Toronto can keep this average alive, it will pay big dividends considering how well the Raptors’ shoot from the charity stripe. Seattle is also one of the worst rebounding teams in the league so Toronto should be able to get some easy put-backs and command an advantage on the glass.

Maybe the biggest key to this game though in my opinion will be the coaching. I’ve really found that Sam Mitchell has done an excellent job as of late in working his rotations and taking advantage of match-ups. He’s also had his troops playing much better on the defensive end and the team seems focussed each time it steps on the court. Seattle coach Bob Hill has been on the hot seat for quite some time and Sam Mitchell should be able to turn that burner up another notch with a Raptors win tonight.

After some unfortunate attempts to spam us out of business, our tech crew has taken some added measures to ensure that we can get the conversation flowing again. Big thanks to Jerry for getting this hooked up and keeping the HQ in business.