Tip-In: Welcome to the Hospital Ward

Share All sharing options for: Tip-In: Welcome to the Hospital Ward 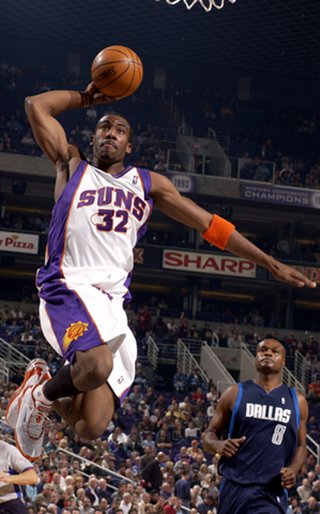 Am I missing anyone? I think I just injured myself typing this.

The Raptors felt the wrath of the NBA’s top offence last night as Phoenix halted Toronto’s three-game winning streak with a 115-98 win and in the process extended their own streak to a franchise-record 15 wins. In addition, an injury-depleted Raptors squad got a little more banged up with both Jorge Garbajosa and TJ Ford leaving the game due to injury. That makes nine of Toronto’s players who’ve missed at least a game this season due to injury. Not great numbers if you’re trying to win games – especially against a team like the Phoenix Suns.

Watching Phoenix, all you can say is "wow." This is the second time this season that I’ve felt like Toronto was simply playing a much superior opponent and therefore had little to no chance of winning. The first came after seeing the Dallas Mavericks’ perfect blend of offensive efficiency and defensive intensity. Phoenix on the other hand, seems to play no defence at all and instead floats up and down the court effortlessly scoring at will. Yes, while Dallas may have been efficient with their offence, Phoenix is simply awe-inspiring in theirs. Of course it starts with Steve Nash, he who had racked up nine assists by the end of the first quarter, the most ever in a quarter by a Raptors’ opponent, but make no mistake, Suns’ coach Mike Dantoni is a big part of this end result. During half-time TSN showed Nash in action as he found his teammates for open shots time and time again. However I was more amazed at just how many screens the entire Phoenix team was consistently setting to get players open for shots. Most of this team has been together now for over two seasons and it shows as they weave in and out of their offensive sets as if they had emerged from the womb, Suns’ playbooks in hand.

And for those who saw last night’s match, it sure looks like Phoenix isn’t going to have to depend so much on their outside shooting this year. Amare Stoudemire was unstoppable scoring 28 points on 11 for 14 shooting and looks to be getting back to the style of play that made him one of the league’s most feared post-presences. With a healthy Amare as the punishing inside presence this squad lacked last year, Phoenix looks primed for another run at the NBA Championship.

As for the Raptors, well, they’ve got to lick their wounds and prepare for another tough match tonight against the Los Angeles Clippers. The Clips have been one of the league’s most disappointing teams so far this season but with Toronto’s current injury situation and the back-to-back, this will be another tough test for the Raps.

After the game, TJ Ford said that they’ll have to "drag him off the court" for him not to play tonight so it sounds like he’ll be a go. Garbajosa sounds much more like a game-time decision, something that will hurt Toronto if he can’t play as Sam Mitchell will probably be forced to use Andrea Bargnani in the starting lineup against the likes of Chris Kaman and Elton Brand. PJ Tucker had an excellent game even in last night’s loss (12 points and 9 rebounds in only 18 minutes of action) and should get extended minutes again tonight. He actually may be the best option on Brand allowing Bargnani to focus on the offensive end. Bargs struggled from long range last night (the whole team did going 2 for 12) but did a decent job offensively scoring 18 points. He also continued his improved rebounding effort grabbing 8 boards. Toronto is going to need that sort of effort again tonight.

It’s interesting to note that statistically, the Raptors and Clippers are quite similar. Both teams struggle from beyond the arc (Los Angeles is the worst three-point shooting team in the league currently) and offensively they rank sixteenth and seventeenth in points per game average. Defensively LA has been holding teams to only .3 points per game less than Toronto on average and are 22 and 23 in opponent field-goal percentage respectively. The real difference comes on the boards where the Clippers are one of the league’s better rebounding clubs whereas Toronto once again this year has struggled. Without Chris Bosh, Toronto is going to need to rebound by committee in order to prevent the Clips from getting easy put-backs.

Ironically, even in last night’s loss Toronto did a good job on the glass out-rebounding the Suns 45 to 43. The Raptors simply couldn’t knock down their shots shooting only 40 per cent from the field and playing right into Phoenix’ hands by trying to keep pace with the Suns. The Raptors attempted a ludicrous 95 shots and simply couldn’t get them to drop with much regularity. Tonight, the Raptors have to play their style of game and not let the Clippers dictate the pace. Defensively Toronto should also have success using their zone permutations due to the Clippers’ long-range struggles and if the Raptors can contain Elton Brand and force players like Shaun Livingston and Quinton Ross to become prime scoring options, this game could be theirs for the taking.

On a final note outside of the realm of "all things Raptor," the Iverson trade as most folks now know, looks to be a done deal. I have my doubts as to how AI will fit with Carmello but the trade does give the Nuggets one of the most lethal scoring duos in league history. I'm just curious to see how George Karl is going to make this work. I assumed the Nuggets would keep Andre Miller and play Iverson at the 2 but with Miller now gone in the trade, who's going to play the 1? Earl Boykins? Iverson himself? Boykins and Iverson would make the smallest backcourt since I suited up with my former roommate for YMCA ball and I'm not sure that's the direction Karl will go. Additionally, Philly's offensive struggles have been well documented in the past when a coach has tried to make AI the creator for his teammates as well as himself. Iverson simply dominates the ball and I'm not sure how gunners like JR Smith and the aforementioned Melo will feel about this.

The most intersting part of the trade for me however wasn't that Philly now may become the worst team in the league by far, but how similar this trade was to Toronto's dealing of Vince Carter. Both teams received first round picks, a player who they felt could contribute to the current club (yes, believe it or not Eric Williams was supposed to help Toronto when he was acquired) and expiring contracts. This seems to be the going rate for a disgruntled superstar and Philly now finds themselves with three first-round picks in what is expected to be one of the most talented drafts in the last few years.