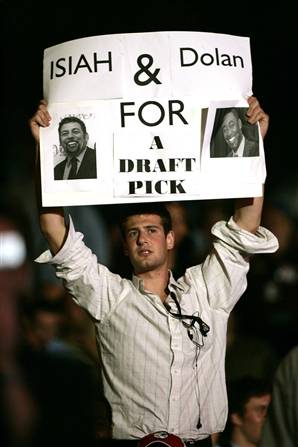 And the boos rained down...

No, this isn't a throwback to the Hoffa era in Toronto but a recap of last night's 103-100 win over the New York Knicks. The Raptors got their second straight victory, and fourth in five games, as they took down the Knicks by getting key plays in the crunch from Chris Bosh and TJ Ford to seal the deal in what hardly seemed like a road game.

With the way the New York fans got on the home team, the Raptors must have felt quite comfortable...the Knicks, not so much. In fact, it's going to be tough for the Knicks to get anything going at home considering the zeal their "fans" boo them with. Perhaps that explains why the team is 1-7 at home.

After the game, Knicks' coach Isiah Thomas was quoted as saying "We're very tentative and cautious at home...There's an aggressiveness that we display out on the road, that for whatever reason we haven't been able to overcome our fears of playing at home. It's totally mental. It has nothing to do with physical. It's definitely mental."

And that's unfortunate for the Knicks considering that they have one of the most imposing players in the league in terms of physicality in Eddie Curry. Toronto led the game from almost start to finish but Curry almost single-handedly won this game for the Knicks in the end as New York stormed back in the final minutes of the fourth quarter. Rasho Nesterovic, who Raptors' coach Sam Mitchell inserted into the starting lineup to counter Curry, had fouled out and it looked like Toronto simply didn't have an answer for the beast of the buffet. However Toronto stepped up its defence when it mattered most and tried to deny Curry the ball as best they could. The strategy worked and New York simply didn't execute their offence as Toronto closed things out in the end.

So did the Raptors make good on our game keys to get the win?

Well, Toronto's defence was actually quite good at times in this match, especially in the second half. Quentin Richardson started the game on fire from the field but the Raptors clamped down on him from the second quarter on and limited the quality of his looks. And besides Eddie Curry, Toronto prevented the Knicks other gunners from going-off. In fact, Toronto forced the entire Knicks' team into 32 per cent shooting in the third quarter and players like Anthony Parker and Jorge Garbajosa did a great job of rotating and switching on defense to prevent the Knicks from getting open looks. Yes, Renaldo Blackman did get too many open dunks in transition...but it's safe to say that the Raptors can live with that considering that they contained the likes of Marbury, Crawford and Francis.

Offensively Toronto did an even better job as the team continued to put emphasis on getting to the rim and shot 33 foul shots to the Knicks' 20. This was indeed the difference in the game and once again, with the free-throw shooters this club has, the Raptors need to ensure they make use of this advantage over other teams on a consistent basis.

The other advantage Toronto has on other clubs is their bench and while they were outscored on this evening, players like Andrea Bargnani, Jose Calderon and Kris Humphries gave the club a huge lift at times, especially in the second half. Bargnani continued his surge for rookie of the year consideration and Sam Mitchell seems to be more and more comfortable leaving Il Mago out in key situations.

Besides the bench, the Raptors' starters perhaps played their best game of the season collectively with Chris Bosh and TJ Ford leading the way. Bosh was his usual awesome self with 26 points and 13 rebounds (including numerous timely offensive ones) and TJ Ford joined in the fun with 10 assists and 20 points of his own. In fact the Knicks had no answer for the Texas-twosome and after seeing these two operate late in the game, one has to hope that this is a sign of things to come.

...and maybe we'll finally have an answer to that "who is the second best player on the Raptors" question...