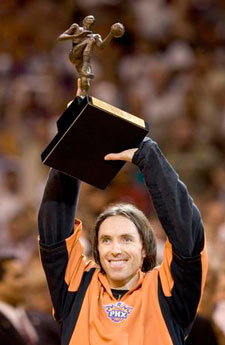 The Raptors kick-off four games in five nights with a tough matchup tonight against the Phoenix Suns. The number one offensive squad in the league is averaging over 110 points per game and shooting an insane 49.17 per cent from the field, rather daunting numbers even for a Raptors’ club that’s been much better defensively in the past few games. Phoenix sits atop most NBA power-rankings as well being led once more by two-time MVP Steve Nash, Shaun Marion, and a rejuvenated Amare Stoudamire.

So does Toronto have a hope in hell of winning this game?

On paper obviously it looks like a foregone conclusion that this game will end up in an L for the Raps, especially minus two of their most productive players in Chris Bosh and Jose Calderon. Calderon appears to be ok after suffering a scary fall Sunday against Golden State and tests have revealed no neurological or structural damage concerning his back. In fact, he may even rejoin the team for its final two road games on this West Coast swing.

Without Calderon, Darrick Martin will be pressed into extended action and his play may actually be the first key to Toronto keeping this one close. TJ Ford will probably be forced to log quite heavy minutes as he chases around the likes of Steve Nash (who’s playing like an MVP candidate again), Leandro Barbosa and Marcus Banks, three of the league’s quickest guards. Martin will be asked to do the same, and if he can keep those three from carving up Toronto’s defence, the Raptors will have a shot in this one. Expect to see Fred Jones, who appears to be good to go for this evening’s tilt, to see some minutes at the 1 as well.

Defensively, Toronto is going to have to find success in a number of defensive combinations in hopes of getting Phoenix off their game. A full zone will probably spell disaster for the Raps as Phoenix has the guard-play to penetrate and collapse Toronto’s zone, thus allowing them to find open shooters to knock down outside shots. Sam Mitchell will probably use some variations of the match-up zone he used Sunday against Golden State and hopefully Toronto can score enough points on the other end to keep themselves in the game.

Finally, while Phoenix boasts the league’s top offence, it also has one of the league’s worst defences allowing teams to score on average 104.2 points per game. The Raptors can’t get caught up in a run-and-gun game but if Toronto can take its time and execute offensively, they should be able to score at will. Two players who I see as being the wild cards for tonight’s match offensively are Andrea Bargnani and Joey Graham. If Graham can stay out of foul trouble, he should be able to use his size and strength to bully some of the Suns’ smaller players and get to the rim. Bargnani has hardly been playing like a rookie as of late, and if he can draw Phoenix’s bigs out on the perimeter, it should open up shots for the likes of Morris Peterson. He’s also a walking mismatch for the Suns who don’t have anyone to effectively match-up with him and hopefully Bargnani can mix up his game to get Phoenix’s front-court in foul trouble. Without Bosh in the post, Toronto is going to have a tough time containing Amare (Jorge Garbajosa will likely get this assignment) and therefore Toronto really needs Bargnani to even the playing field.

In addition, tonight will mark the first time that I try something new while watching the game -putting the television on mute and turning on the Fan 590’s broadcast. Last weekend I was on the road for the Nets game and was forced to listen via radio to the broadcast provided by Paul Jones and Eric Smith...and was pleasantly surprised! As opposed to listening to Chuck’s hysterics, Eric and Paul did a great job of making you feel like you were watching the game all the while providing insightful commentary devoid of all the over-the-top antics that have made listening to Chuck nearly impossible.
In fact, a perfect example of this was Sunday’s game against the Warriors. Jose Calderon is clearly injured on a play and as most fans watching are probably holding their collective breaths we hear Chuck yelling to "get out the salami and cheese!" I felt sick to my stomach. I find it downright embarrassing to listen to "the Swirsk" recently and someone at MLSE needs to get him to tone it down. His tirade prior to Sunday’s game about the fracas at MSG the previous night ("David Stern will not let this happen in his backyard, etc, etc") was just another example of his recent infatuation with railing away on various subjects (oh, and this coming from the biggest proponent of the Raptors selecting Nate Robinson two years ago) which makes an article like this from the Toronto Star that much more puzzling. Yes, I understand the need to inject fun in the game, but the author of this piece must have been watching his first Raptors’ game when he wrote this article. Take for instance my favourite part:
"Swirsky could be accused of being a homer, especially when he greeted Warrior three-pointers with silence, but there's more than enough evidence that he calls the game without waving a Raptors towel even if they do sign his paycheques."
Anyone else have a chuckle reading that?
I think my suggestion to Mr. Zelkovich is that he tune into a few more contests and then see how he feels about Chuck’s broadcast style.
Believe us Chris, this shtick gets old.